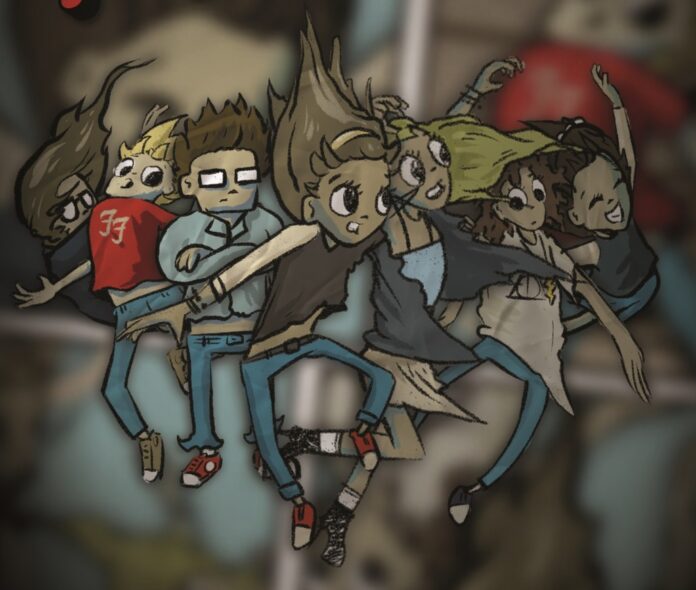 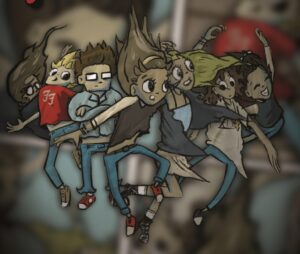 Keith Goldhanger has been trying to work out the combined age of Pesky. Without the use of a calculator he gave that up as a bad idea and just spent a few days listening to the secondary school band’s debut album. And is rather impressed.

One of the weirdest events at our school involved our music teacher.
In my second year we had this new angry horrible bastard of a bloke who literally (in one case) had children shi………well, you know….?

In order for this piece of late night rambling to get pinned to a school corridor by Christmas I shall refrain as best I can from swearing even though I’ve already called someone from many years ago a bastard and got halfway through the second sentence before I nearly said shit.

Well he was probably worse than a bastard if the truth be told.
Anyway, that teacher.

Basically just shouted at us and ridiculed us for about two weeks until……well, someone must have had a word.

I don’t think he was threatened with physical violence (I still assume) but it was enough for him to turn 360 degrees into a church going, bell ringing, posh, non angry any more music teacher who still taught us nothing for two years.

He ended up eventually reporting some of us to the police for bullying him and by our last year in school he just let us take records in, play them loud and chat as much as we liked over the top of them.

That didn’t teach us anything either.

I remember learning about cows at this age, I can still recognise a breed of cattle when driving through the countryside and I still remember that list in Chemistry that went Potassium, Sodium, Aluminium, Zinc Iron, Tin, Lead, Copper …..any idea what that list is ?

How did I manage to leave school and only remember this about Chemistry along with every word of Funky Moped and nothing else ?

And why did we have to wait until a couple of years after we left school before we had to decide for ourselves that picking up an instrument, hitting it and shouting at our mates across a room was bloody good fun ?

Pesky ! are all about twelve years old and during their lunch, in between boy scouts, girl guides, learning about Pythagoras and arguing with dad about who’s turn it is to sit in the front seat they make glorious anthemic 1990’s style dreamy shoegazing tunes that could really have been made by anyone of any age.

Therefore something in this world is going right.

Someone somewhere (Ulverston, Cumbria,wherever that is – Geography passed me by as well) has encouraged these children to write songs, record them and pass them onto Fierce Panda and it seems everyone who has hit the play button since have been impressed, not with the young ages of the personel involved but by just how good these tunes are.

Pesky (great name for the band) are releasing an album called ” Smells like tween spirit” (that’s probably something that was dreamed up by a parent or a teacher I reckon).

It’s an album that’ll give the individuals a good start to life.

They’ll hopefully learn by this that dedication and continued enthusiasm is a good thing and that you don’t necessarily need to be talented, just committed and enthusiastic and that if one of their dads did come up with the Nirvana inspired album title then they should learn from this to tell their parents to stay out of these things unless of course it was a deal that involved being driven to a gig or getting the equipment they probably desired.

They sound like the Cocteau Twins, or Sigor Ros, or one of those cool American bands that once used to come over to the UK for six months, release a couple of great albums (Radial Spangle, Belly, Drop Nineteens …) and then disappear until the Internet got invented. Pesky !’s young voices fit nicely between the wailing washy guitars that after a few listens really do get us all nostalgic about those days back in the early ’90’s when loads of bands were appearing on our doorsteps (Ok then, The Hampstead White Horse or The Camden Falcon) not just from the US but from in and around The Thames Valley.

This is one of the consequences that has resulted from adults having sex to Snow Patrol back in 2002. Third track “Lightning” sounds like it may have been heavily influenced by that tune we often hear when the Xfactor judges turn up uninvited to tell children older than Pesky! that their dream is “over”, that there is absolutely nothing they can do to prevent them from having to come to terms with a job in a supermarket and that other options in life that are available in order to stand in front of complete strangers and play the guitar may not even exist.

This is a great debut and it may or may not be the beginning of a long journey into the murky world of music for those involved.

It’ll be interesting to see where this band go from here. A Tuesday night inside The Camden Barfly may be something we’ll have to wait a while for one suspects and we imagine their parents will be having a few words with the individuals here about not letting all this go to their heads.

They’ll learn in time that this is much better than stamp collecting, Chemistry or learning how to spot breeds of cows whatever happens after this.

Ask someone who knows about this stuff.

Smells Like Tween Spirit by Pesky is released on Fierce Panda on October 23rd 2015.

All words by Keith Goldhanger. More writing my Keith on Louder Than War can be found at his author’s archive. You can also find Keith on Facebook and Twitter (@HIDEOUSWHEELINV).