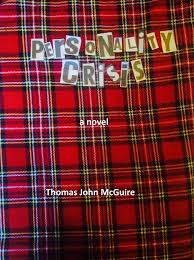 (Paperback only – self published)

Thomas (TJ) McGuire has written this novel (which is clearly his own first-hand memoirs made part-fiction) which is the story of not only a typical local first wave punk band forming, playing, arguing and splitting but the story of what it was actually like away from the London glamour of the Kings Road, ligging at The Speakeasy and casually popping dahn The Roxy for a pogo and a pint of snakebite. This is set in Denny which if you are unfamiliar, is a small ex-mining town near Falkirk in the central belt of Scotland and is probably equidistant between Glasgow and Edinburgh. Like many of us, the small town punk scene of the late seventies was a time of discovery and awakening for the author; the casual violence, the drinking, the fear that punk engendered in the “straights” and the parents and the sheer accelerated joy and amphetamine excitement of those days is beautifully captured in the story of (I presume) fictional band The Filthy Lookers.

Main character Danny is the erstwhile guitarist of the band; his acquaintances Gussie (the manager, Benny (drummer) and frontman and wannabe man of the people/political agitator Norris are joined by “proper musician” and bassist George on a chaotic journey from attempting to play a couple of chords in a lock-up to opening for The Jam at local and legendary punk haunt The Maniqui. Without giving too much of the story away, this is a tale that will be familiar to many of us from Punk Rock Year Zero; the lives and loves of the characters and the little details of that era are lovingly recreated and I doubt that there’s many of the fifties-plus LTW readership who won’t recognise many of the scenarios and situations and have a wry grin. McGuire’s wide-eyed descriptions of punk girls (who always seemed so cool and distant or was that just me?) and their other-worldliness to us teenage boys is a proper grin-inducing part of the early chapters. Of course, Danny finds himself (and finds amphetamine sulphate) and with his confidence growing his romantic exploits and entanglements add a layer of humour and knowing-ness to the plot. The chapters are neatly named after songs of the era and the story pulses, ebbs and flows with the intensity and vitality of that scene.

Punk in the small towns was all or nothing; you either were or you very much weren’t and by that I mean that if you were in, you were a lifer. Everyone else was the enemy; you were a target for boot-boys, gangs, older men in pubs and the police. It’s difficult to actually describe how totally different the world was back then in seventies Scotland- straight-leg trousers and short hair (or even a punk band badge) would get you a kicking, lose you a job or make your parents throw you out of the house- as happens early on to Danny in the pages herein. Full-blown punk regalia back then was literally a target on the back and that sense of impending violence, paranoia as well as the mistrust and disparaging attitude of the average “ordinary” music fan is artfully described. It’s not all gloom, however; the enthusiasm, the energy, the electric-shock of the music, the camaraderie and the gleeful two fingers up to the world are also beautifully captured in the short, sharp prose. The author (like myself) works in mental health these days and that informs much of his writing and language and his observation of the human condition and its foibles is pretty acute and damn funny, too.

If you, like me, lived through this life as a youngster, this is one you’ll not want to miss.

The book is self-published and available from the Facebook page here £6.99 Sample chapters on the facebook page, along with videos to go with the chapter titles.