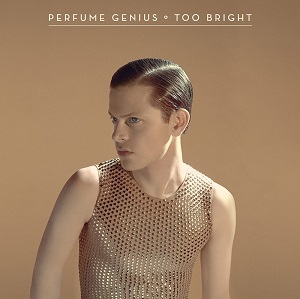 Perfume Genius’ new album ‘Too Bright’ is both perfectly iridescent and soothingly melancholic. Rebecca Sowray reviews for Louder Than War, adds new royalty to the musical sphere and gives thanks for musical mates.

A music mate pressed Perfume Genius’ second album on me, staked shared musical faith on the certainty that I’d fall for it.  I fell.  That list thing in my brain that knows which bands have released what and when, that thing waited.  So a confession; I’ve listened to this review copy of ‘Too Bright’ so much the electrons hereabouts can pretty much dance the tracks without the national grid getting involved.

Two tracks have been released as singles, first ‘Queen’ and now ‘Grid’ (comparemyradio.com records one (one!) Perfume Genius play to Radio 1 in the last 30 days, Radio 6 does okay with a very tidy 39; both must do better).

This is a lighthouse-beacon of a track; it towers, illuminating and strongly belonging to both the album and the man that stands behind it.

Here are four things that hit you all at once with ‘Queen’, and they’re all stellar: firstly Mike’s vocals, then this high-res image; a glittery hedonistic world.  By way of perfect abstraction then he drops us into a dead-end universe of negativity, disease and violence.  And the high gloss on it all is the singer-songwriter with his irresistible command of irony.

A song, this song, these words sung move me to a certainty that this is one of the most affecting voices around.  It feels near at hand, twice as alive as it’s any right to be, both precise and demanding at once.  This man could have sung anything, anywhere and been astonishing.

But that immediate presence shifts into his writing, the lyrics and the music structure.  He’s straight into the demand: ‘Don’t you know your queen?’ It’s an echoey, chord bound, choral wrapped demand as to how he’s seen, where his role lies as a gay American.  That dark humour leans hard into the line ‘No family is safe when I sashay’, gloriously self-referencing You-tube’s decision to suspend the 2012 promo of ‘Hood’, as being not ‘family safe’.

You’re musical royalty Mike Hadreas; that seems sure.  And the video loads into you with internalised visions of how the mirror sees us, references track 8 ‘Longpig’ from this album, and throws in a measure of architectural brutalism.  Honestly, what is there not to love?

There are stand out tracks, loads more self-referencing moments and a couple of things I see as musical cousins.  But to start over at the beginning of the album.

‘I Decline’ revels in that immediacy and simplicity; that re-invented grace of a singer-songwriter that bears the title as a compliment not a catch-all.  Here regret is the very lovely cousin to resolution.  Piano, voice, words run together to offer perfect elegance.

Part of the grace of the album is the shifting style.  There’s a pop feeling that waves cheerily first and then slaps me every time I listen to ‘Fool’, ‘Grid’ and ‘Longpig’.  These tracks play on, as pop with hooks and teeth, in my head even when I’m not actually listening: pop synth, pop rhythms, pop words and voice.  No mistake, they’re all different from each other though.  ‘Fool’ references self-image and control, ‘Grid’ drags us through identity and if ‘Longpig’ is about the idea of man as meat, as it hints to me…   But they all share both their roots and a generous shot of emo referencing misery.

Do you see yourself as an outsider? To look in with ‘No Good’ and consider that

“There’s no general way in,

To think about the lack of security in life; our place of safety within a relationship, how the past fetches us to where we are and to show that as a universal thing. This is his skill; to walk the edges. That the song opens out from just voice and piano, expands through both the images drawn and the instrumental expansion. Ultimately what seems like a final quietening is answered, windows opening, to pop echoes of ‘Queen’. Here is his meaning; his truth, the images from ‘Queen’, thrown back for our consumption in the same way that the world offers him a distorted image as a mirror.

‘I’m A Mother’ and ‘My Body’ are cousins; all ultra-tight lines, stripped down, dark dreaming. Human weaknesses and needs displayed. My Body – the impetus of illness, that it becomes its own sole focus, the consequences of the dark that lies within it. ‘I’m A Mother’ is a range defining piece, delicate and sharp and needy. He knows and gives form to what happens in the distance between the beauty and the absolute dark which he references; that there are far worse things than the death promised by the old dark of fairy tales.

‘Don’t Let Them In’ offers a suggestion of the shy clown, the unhappy extrovert. I’m not sure that is what is meant here, but it is a map of the difficulty in shift between public and private self. The times when you’re too tired to deal with that:

“Don’t let them in

There is a lot of chatter, the seed of which certainly begins with Mike Hadreas himself through interviews and his own presentation, about his music being a journey. A path that begins with the first album, Learning, and deals with self-abandonment, abuse, discovery. You can find more assurance, maybe, and more that is universal in Put Your Back N 2 It before arriving here with the openly radical (in parts) Too Bright.

‘All Along’, a perfect last track. An unravelling, with heavy-weight writer line breaks, at walking pace. The guitar lines that my rock refugee’s ear has been looking for all along, accompanying. Walk with him, carefully along the edge of this precipice:

“I don’t need your love

I don’t need to love

I don’t need you to understand

I need you to listen.”

So. Listen. Do as you’re told.

There is a core to all of this; the voice and the dark emotive human revealed. I’ve sat and looked at the album covers (because I am unreconstructed and love physical copy) and come back, time and time again to this. They are all three mid-tone in colour terms. Just like new steel. I’m going to use that thought for Perfume Genius: steel is strong but at the same time affected by the environment, grows stronger when hot and beaten, shows it’s iridescence through tempering, at first liquid and dangerous and when finally forged becomes a straight-on weapon. I’m going to sign up now as a lunatic fan because I want to see where this man goes. Because it’s going to be bloody dazzling.

Listen to this third album and join the legion of the seduced. Then go back and listen to the other two, either again or for the first time.

Here’s to waiting and the next one.

All words by Rebecca Sowray. Rebecca can be found on Twitter and her Louder Than War Author Archive.