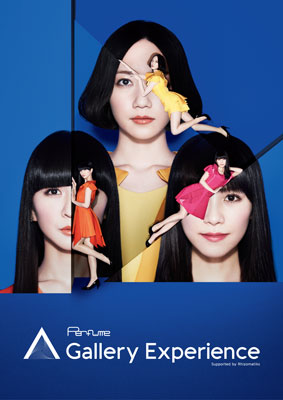 Over the course of their 15-year career, Japan’s chart-topping electro-pop trio Perfume have repeatedly redefined the interplay between music, fashion, technology and design.

In August, a special gallery exhibition will bring Perfume’s unique design to London, offering fans and newcomers a rare opportunity to see outfits worn by a-chan, KASHIYUKA and NOCCHi on stage and in music videos – along with other memorabilia and artefacts from throughout their career.

“Perfume: A Gallery Experience – Supported by Rhizomatiks” will gather items such as the light-up LED dresses from the video to smash-hit single Spring of Life; the dresses, engineered by globally renowned multimedia design group Rhizomatiks, are just one example of how Perfume have embraced cutting-edge tech into their bold fashion.

Other exhibits on display will include high-heel shoes that were specially designed for Perfume’s intricate stage performances, promo posters from all through their career, and items created just for this exhibition such as a photo spot and a special video message from the members of Perfume.

Until 18 July, fans are invited to vote on Perfume’s official Facebook page for their favourite outfit. The winning clothes will be displayed at the London exhibition, which will be held at the Old Truman Brewery Shop 7 in Shoreditch, London, on 6 and 7 August.

The exhibition coincides with the European vinyl release of Perfume’s latest album “Cosmic Explorer”, which will be available for purchase at the venue, along with the highly anticipated Blu-ray release of feature-length documentary “WE ARE Perfume -WORLD TOUR 3rd DOCUMENT” and other Perfume CDs and DVDs.

Tickets are priced £5 and are available in advance from Eventbrite or on the door. Advance ticket holders will receive an exclusive free collectors’ postcard upon entry.

Formed in 2000, top electro-pop trio Perfume (a-chan, KASHIYUKA and NOCCHi) are one of the most influential girl groups in Japan, beloved for their futuristic concept and creative performances.

The group made their major debut in 2005 and broke through with monster hit single “Polyrhythm” in 2007, taking techno-pop music and culture to the mainstream. Signing with Universal Music Japan in 2012, Perfume began their global activity, with sold-out tours around Asia and later in Britain, Europe and the United States. Their first album with Universal, 2013’s “LEVEL3”, became their 5th consecutive No.1 album in Japan, breaking a domestic record. After becoming the No.3 most-tweeted artist at SXSW 2015 with their futuristic performance, in 2016 they released “COSMIC EXPLORER”, which reached No.1 on the iTunes Electronic Album chart in 11 countries including the US, Canada and Mexico. Perfume are currently on the road with the COSMIC EXPLORER Tour, which kicked off in Japan in May and will cross over to the US this summer.

Founded in 2006, Rhizomatiks consists of an eclectic mix of creators, ranging from media artists, designers, engineers, architects, and musicians. Harnessing our passion and expertise in technical matters we are able to set free our imagination across the disciplinary boundaries of design, art and entertainment.

As we challenge existing formats from interactive designs to spatial design, the results have lead to the creations of new formats, which have been recognized through numerous awards received over the years. Some of these awards include: Prix Ars Electronica, Japan Media Arts Festival, Cannes Lions International Festival of Creativity, and more.