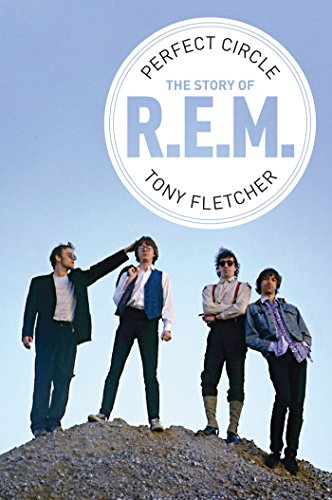 PERFECT CIRCLE, THE STORY OF R.E.M.

‘From cult to colossus’ is a fair description of R.E.M. The band who Michael Stipe explains “built something extraordinary together…and now we’re going to walk away from it” when they  retired in 2011.

And Tony Fletcher is the man to tell the tale. A fan from the outset; he saw all their  gigs when they first came to the UK, he’s also on first name terms with Michael Stipe – “Hello Tony,” he utters on an encounter some years after they’ve previously met.

The current and definitive version literally brings matters full circle, indeed the Perfect Circle of one of their earliest recorded songs, the natural conclusion coinciding with the band’s decision to call it a day in 2011 and the perfect opportunity for Fletcher to bring closure to his efforts.

If Remarks Remade was what he termed the ‘Director’s Cut’, then the 400 plus pages of Perfect Circle have exceeded even that and allowed him to really report in depth – the word count is indeed very impressive and the story he unravels very comprehensive. The text itself has been based on many  interviews with friends, associates and goes beyond just the story of the group’s rise through cult status into mega stardom and success, but also places their career within the wider context of the story of American culture and rock music.

The one member of REM who allowed himself to act as spokesman for the band and be the ‘official’ link between band and author was guitarist Peter Buck. Himself a self confessed music junkie who used gaps in the REM schedule to indulge in some other  music related activity be it sitting in with other bands  or even going back to his old job in a record store (where he would be paid in vinyl).

The early days of the formation of the band in their hometown of Athens, Georgia and their first attempts at making music together are covered in detail with references from various friends who saw them through their formative days. It’s quite remarkable how they went from not much more than a very rough and ready garage band with no experience of live performance to becoming the toast of their Athens comrades in such a short spell during 1980. They were heavily bolstered by a healthy local music scene which was open to embracing the new wave of sounds together with a healthy student population and college radio network which was prepared to air their music. Of course their dues were paid and their act was honed by playing live and most of the 1980-1982 period was spent on the road. It was the college circuit (along with the other two ‘C’s – critics and concerts) which contributed most to the almost instant success of their debut album Murmur along with what Buck recognises as simply being in the right place at the right time: “in America you can be a great band for five years and no-one will look at you.” It could even be viewed as a case of hometown boys making good; their very organic approach to writing and recording and keeping a close circle of trusted friends and advisers and all being based round their home patch of Athens paid dividends. Supported by a sympathetic record label in IRS, they were lucky enough to have artistic license even from their early days and it was only when they veered from their Athens comfort zone and relocated to London to record their third album, Fables Of The Reconstruction, that they hit their first stumbling block.

It was the break from IRS (not an easy decision to make) and their deal with Warner Brothers which elevated REM into the big time and one that could be viewed as the end of one era and the start of a new one – older fans maybe being a little more precious about the IRS albums and output whilst the early Warner recordings gained the mass appeal and critical acclaim yet still allowed REM to remain a band who worked under their own terms and agenda. It was the start of a  Beatle-like hiatus from live work around 1991 and 1992 to focus on recording which resulted in similar critical acclaim, with the occasional forays into the unplugged market and cherry picking live performances, which continued to set a precedent for them making their own decisions about how best they would like their career path to progress.

It was the Monster album and tour of the mid 90’s which sent them into both mega stardom and also into turmoil with drummer Bill Berry’s aneurysm resulting in him taking stock and calling it quits just as REM had made it big. The band’s desperation and willingness  to accommodate him within their work schedule and Stipe’s resulting anger could be seen as  a turning point for the future of the band with one essential element being gone. However, the three remained both upbeat and determined. Despite a trend towards a minor shift in the balance of their popularity from the USA to Europe and the sight variation in sales of records right up to their final album, this  was tempered by their still high popularity as a concert draw with arenas and stadia (particularly in Europe) being filled with satisfied  punters .

Whilst the author is both an established and a long term fan, he hasn’t been  afraid to pull any  punches when criticism has to be made. The criticism doled out to the Around The Sun album, which is quite impartially viewed as the one dud in the REM catalogue, doesn’t get fudged or diluted, whilst their final album Collapse Into Now is viewed both as a simple extension (or more of the same) of the previously acclaimed Accelerate album whilst being very much a final curtain call and an attempt to conclude by covering all the REM musical bases whilst bidding farewell  both lyrically and on the cover with Michael Stipe’s parting wave.

For a band which have always maintained an artistic and personal integrity and (in the main, Peter Buck’s air rage court case not withstanding) avoided controversy, Perfect Circle is a fitting and complete tribute to a what is essentially a group of friends who had always had the purpose and fortitude done things their way. Their place in the annals of popular music history and culture is secure and they can be satisfied that Tony Fletcher has done their musical legacy some justice in print.