A Perfect Circle are a band who for many, may have passed under the radar, perhaps a result of their transitory nature as an outfit (one that some have termed them the dreaded supergroup) who rely on the availability of the exceptional and unique  talent that is Maynard James Keenan.

Seduced  by the strange fascination of the cover art of their recently released Eat The Elephant, whose images I have to admit to finding alternatively grotesque and intriguing, it proved a record that  fourteen years on from their previous effort (2004’s Emotive, itself a set of reworked covers), shifted the goalposts from a ‘less metal’ direction and has  led them to be feted as new heroes by the progressive rock crowd. Whether that’s a palatable link or just the sort of tenuous one that attempts to label a band who are the archetypal band with no boundaries, they seem to fit the ‘progressive in the Radiohead sense’ rather than following the ‘traditional’ seventies prog template. 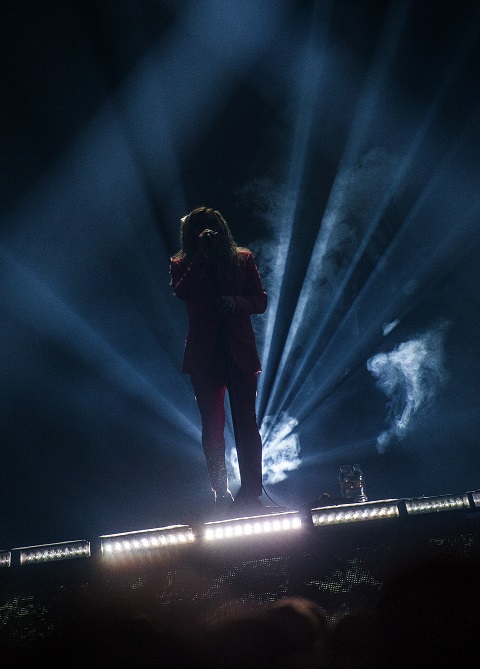 One date in Manchester before heading down to Brixton Academy proved a strong pull; sold out and packed in like sardines to stand at the feet and hang on the words of Keenan and the man who has provided an inspirational musical foil and guide, Billy Howerdel.  A sense of anticipation in a crowd that covered a wide demographic from the more mature music lovers at the barrier who may have been around buying the T shirt in prog’s golden period, to the younger end whose tastes may run to the  more contemporary and challenging.

Shrouded in deep and  dark colours, the anonymous backlit silhouettes  emerged to create  a musical experience that demanded and gained the rapt attention of an audience in a coming together and  collective belief that they were in the presence of something special. Adhering respectfully to the no photo / audio / video policy, it was easy to soak in the evocative and challenges that come with the musical and lyrical passages that form the songs of APC.

Based around a healthy portion of Eat The Elephant, the contrast between the more refined and considered newer direction and the urgency of some of the older material on show – Weak And Powerless and early indication that they haven’t abandoned their harder edged cause and the wild undulation as Howerdel led through 3 Libras – was mesmerising. Their penchant for reshaping various covers saw People Are People punctuating a set heavily in favour of Eat The Elephant. Not an issue with anyone to be fair as the title track and Disillusioned wove their spell as the lights went down and the band slowly took to the stand. On the other hand, older songs  Package and Vanishing segued seamlessly with the new material that combined to provide a late set  peak with an impressive quadruple hit (The Contrarian and Talk Talk hypnotic and brooding) before what many see as the APC anthem, the evocative mesmerising pulse of Counting Bodies Like Sheep To The Rhythm Of The War Drums laid waste with a devastating blow.

Proof of the old adage that good things come to those who wait, the return of A Perfect Circle to the UK live arena has rewarded the patience of those who’ve sat and bided their time in expectancy of  savouring a magnificent aperitif for a further handful of  gigs in early December.