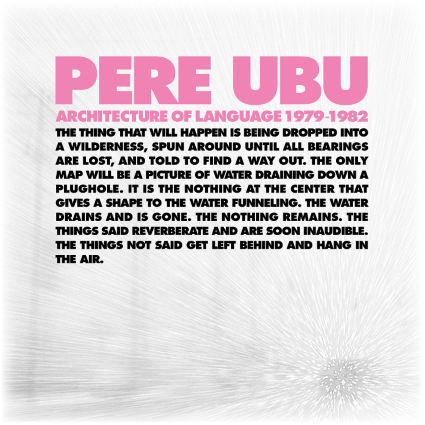 Ahead of their ‘Coed Jail Tour 1975-1982’ Spring 2016 (see dates below) the ever individual, idiosyncratic and, above all, influential band/enigma Pere Ubu release a four LP box set of new masters of their early albums ‘New Picnic Time’ (1979), ‘The Art Of Walking’ (1980) and ‘Song Of The Bailing Man’ (1982). Combined with this is an extra LP of extras called ‘Architectural Salvage’.

This immense body of their early work (but only spanning three years) perfectly illustrates the ‘well before their time’ facet of Pere Ubu. They have always been very experimental and this collection certainly has echoes and influences of ‘Beefheart’s weirdness and way out experimentation, as well as its intelligence and basis in originality and expression.

One of the first things you notice in this collection is the funky baselines that permeate throughout the first few tracks. These then segue into experimental tracks that certainly embrace the (then) new technology including Synths, etc that the band embraces completely.

This experimentation continues throughout the resulting collection and this result in a body of short spurts of intelligence, inspiration and long lasting influence (surely??) on band such as Pavement and Guided by Voices?