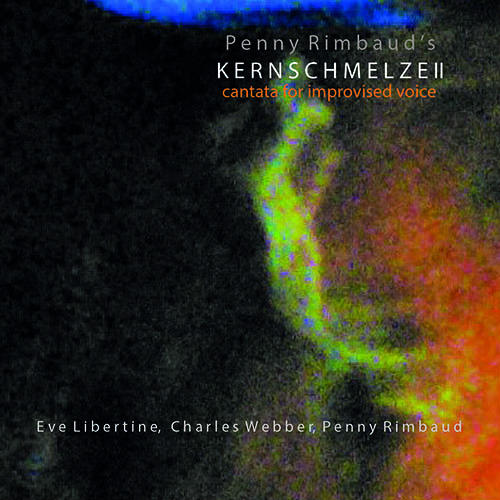 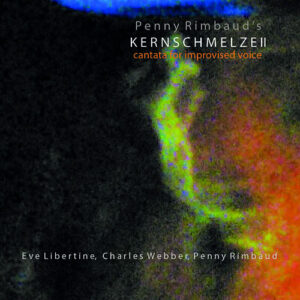 Moments here of pure sensitive beauty, hinting at calm and even silence, soporific dream state sounds, at other times there are end of the world howls, disconcerting violent noise, still beautiful but in a different space

The word Kernscmelze translates as meltdown. This is a perfectly appropriate title for a piece of music which has already evolved through a number of different forms, Penny Rimbaud as composer allowing it to move in it’s own way, to melt away it’s solid form to re-emerge as something new.

This rendering and interpretation of the piece has travelled many miles since it’s initial composition, Kernscmelze II’s creation is the work of three individuals; it features Eve Libertine’s improvised vocals and lyrics, based on her poem ‘Cage’, Charles Webber provides improvised piano and electronics and co-produces the piece with Penny.

Originally Kernschmelze was a solo electronic composition, made as an introduction to Penny’s poem ‘In the Beginning’. Poetry providing the seed for this piece to begin its journey. A poetic genesis, It’s life has been organic but trained towards the light f experience with others. Kernschmelze becoming Armageddon as the big bang, a cycle of experience, beginning with an ending preceding a new beginning and all is happening simultaneously in cycles.

The background to this album is quite something; the journey takes the music to Tokyo, evolving, stretching its form, fragmenting, conjoining, an alchemical separation from the one meaning into something new and unrecognisable. Then to Dresden and the addition of Charles Webber, the marriage of new sounds, a piano concerto, form twisted and sculpted into a new place. Then Eve and her poem, her incredible improvised vocals and her becoming such an intrinsic part of the sound, choral, voice patterns evolving, electronic manipulation, the sense of time evaporating, of structure dissolving.

There are moments here of pure sensitive beauty, hinting at calm and even silence, soporific dream state sounds, at other times there are end of the world howls, disconcerting violent noise, still beautiful but in a different space, one that is not restful but is full of life and awareness, a raw state of being. Polarities of the one truth, hurtling through the universe, or our own consciousness, the evaporation of ego. The removal of all blocks or at least an attempt to live without them.

This album could be seen as a distant cousin to ‘Acts of Love’, an album also featuring Penny and eve coming as an alternative sonic universe to their activities with Crass at that time. The difference between the two could be down to experience, and also Charles’ contribution adding his own unique dynamic to the whole. Those that have enjoyed ‘Acts of Love’ are sure to love this album.

An out of season bird song serenading, a moment lost but remembered, one becoming three and back to the one. An important work, sound poetry, a vision shared and made manifest, the bird set free for the price of its memory captured.