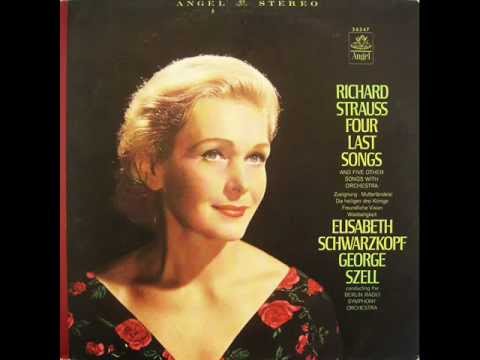 If Romanticism died alongside the millions slaughtered in the First World War, how come Strauss created some of its greatest statements following it? And don’t bore me with tales of Nazi connections. As Strauss wrote: ‘I consider the Streicher-Goebbels Jew-baiting as a disgrace to German honour….the basest weapon of untalented, lazy mediocrity against a higher intelligence and greater talent.’ Employing his own enormous talent and intelligence, Strauss created innumerable works that flew in the face of those who so mercilessly disgraced ‘German honour’, perhaps believing that in his continued creation of beauty he might yet pave a way to a better future. His final work, ‘Four Last Songs’, written in 1948 when his country was still reeling from the horror that had been perpetrated in its name, ends with a setting of a poem by Joseph von Eichendorff, ‘At Sunset’. In its exquisite poignancy, it foretold of Strauss’ death one year later – ‘We have through sorrow and joy gone hand in hand. From our wanderings, let’s now rest in this quiet land….Oh vast, tranquil peace so deep in the evening’s glow! How weary we are of wandering…is this perhaps death?’ And was this in itself perhaps a form of atonement?