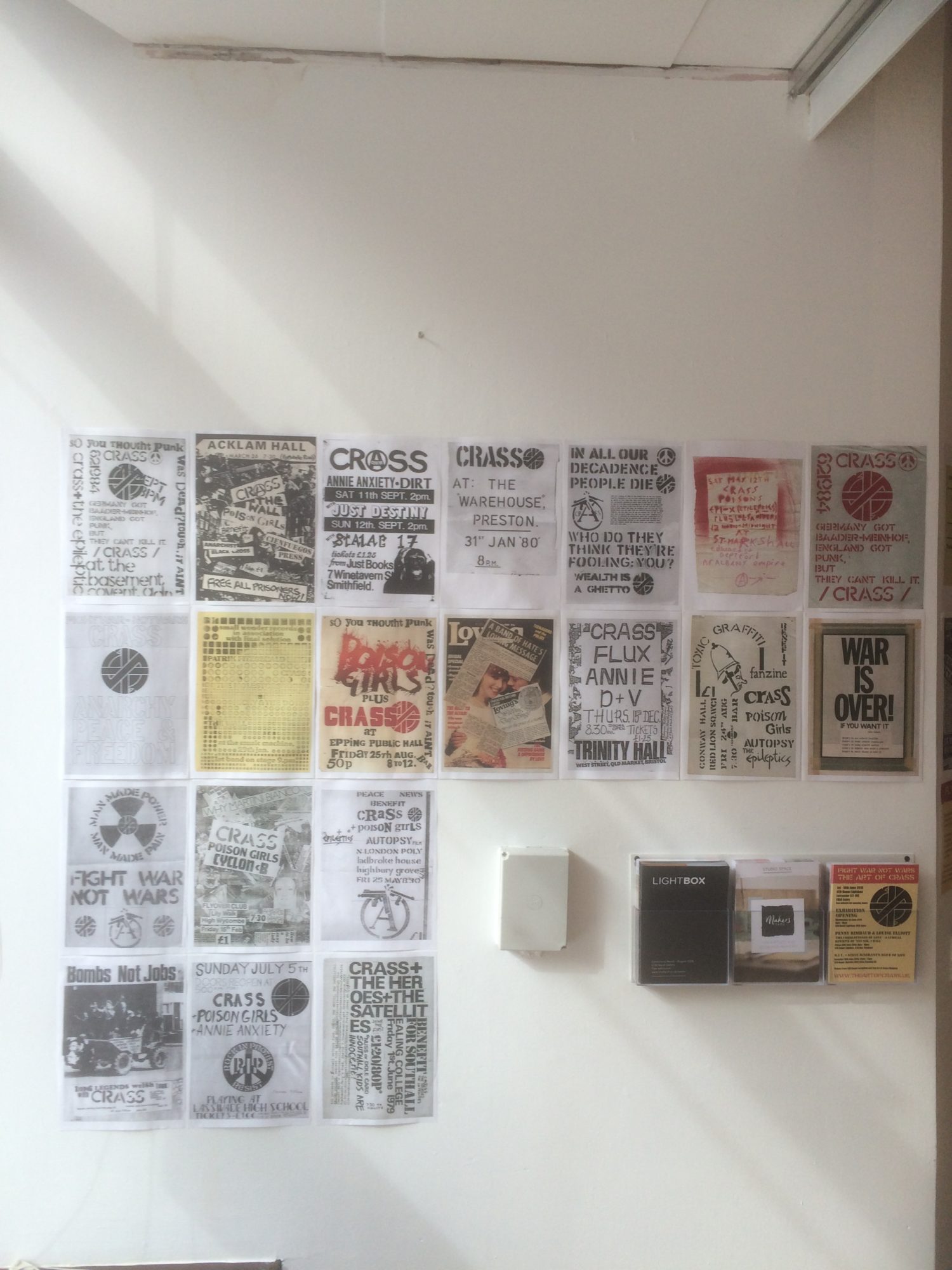 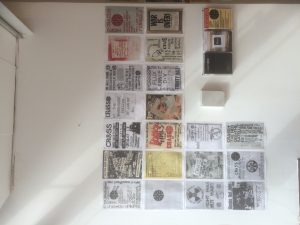 It’s September 30th 1977 and I and my Leicester mates hit the capital to see Iggy Pop at The Rainbow Theatre with my beloved Gaye Advert in support with The Adverts who were great needless to say. Iggy was fantastic too of course but bafflingly kept running offstage in the middle of songs for reasons unclear for over 30 years until I read about him being spiked with laxatives – and so he had to keep rushing to drop his pants and let it all out behind the PA columns – the mystery dashing about I’d always wondered about solved at last!

Afterwards in search of a London punk rock Valhalla that was already past its sell by date we decided to head to The Roxy Club.

When we got there and walked in it felt like we had arrived 6 months too late.

Bob Marley and The Wailers ‘Exodus’ album was on repeat play, that evenings DJ was more Don Less than Don Letts!

Despite a magnificent Mohican hairstyle from one of their guitarists Mean Streets were a fairly undistinguished opening act.

Then there was a long gap, filled by more ‘Exodus’ and writing on the walls with a marker pen ( nobody cared if you did ) and the arrival in the crowd of Gene October of Chelsea, a real punk celebrity in those days..

..and then the second band came on. They seemed to me to be an absolute racket to use Daily Mail reader type terminology. It was fascinating to watch but excruciating to listen to. Between ‘songs'(?) there was a lot of exorting the somewhat bemused audience to respond in some kind of way. The singer admitted they were shit but that we were shit too, why couldn’t we be shit together.

Like the already dying venue itself this band seemed like the death of punk, falling off the punk rock cliff.. telling us “We’re the audience – You’re the band” and then proving this by giving members of the audience their guitars and drums and standing and watching them trash their kit, seemingly uncovered about it. Somehow it ended – the power appeared to be switched off.

What the hell was all that about? Who were they?

They were called Crass.

Over 38 years on I have to say that I think I and about 70 others experienced one of the most revelatory performances one could ever imagine. With a saxophone, a flute and two human voices and with a painfully beautiful honesty the three performers created the power of a ritual, the most happening of happenings. It had a wider context too, it was a galvanising moment for Leicester, it was happening HERE and locally based poets, musicians, artists were a part of it. A 2016 Leicester version of Sex Pistols Manchester Free Trade Hall, everybody will go out and form a band – or paint, or make films or take photographs or create websites, or write poetry.. though fact is many in this audience already do.

This revelatory event is held at the LCB Depot, once the headquarters of our long gone corporation buses. The room we are in in the appropriately named Lightbox and on its four walls are many artefacts form the private collection of Sean Clark whose brainchild this ‘The Art Of Crass – Fight War Not Wars’ exhibition is. To Sean’s credit it feels a million miles away from any cosy London ‘Punk Is 40’ stuff.

Almost all monochrome, much the result of old time photo copying, yet that DIY era still speaks to us in what is our too taken for granted internet age.

Gee Vaucher’s ‘The Feeding Of The 5,000’ is as disquieting an image as any ever commited to an LP cover. The severed hand on barbed wire of ‘Your Country Needs You’
.. geese turning into bomber planes.. These images don’t seem dated, and the struggles and outrages depicted in them still continue and striking modern work by Rimbaud, Libertine and Dave King make this as much about now as about then.

Crass were not fooling and I saw and heard many parallels tonight in 2016 with that time I saw them in 1977.

To begin proceedings Penny Rimbaud did the most un-Q and A of Q and A’s .. he didn’t mind who said what and refused to use a microphone but immediately a sense of deep audience concentration was apparent. How he sees institutions and behaviours most of us live by – or feel trapped into living by – is fascinating. He talks about the open doors he lives by, anyone can walk in, all are welcome, and how he doesn’t see ‘family’ and ‘community’ as being nesaasery to him except in a worldwide sense. All any of us need is a hug. He admits he does not know what peace is and what peace means, that he has learned to be quiet and that he tries not to swear anymore and has edited a lot of that angry language from out of these modern performances of Crass’s ‘Yes Sir, I Will’.

He could have filled the evening with him in conversation with us alone. The conversations he had offstage were as important and other than a brief withdrawal to prepare for his main performance Penny was ‘on’ all time. I got no sense of the ego of a ‘leader’ at all. He was kind and gracious and good humoured and generous with his time and energy to anybody. I feel a bit blessed this last year odd because I’ve crossed paths with CP Lee, George Borowski, Martin Stephenson, Annette Peacock and John Baine AKA Attila The Stockbroker, all people I’ve met before (except for Annette and often in John’s case) but you learn much from any time you spend with them, Penny too..

There followed a set by local performances art collective Anerki.
What electro-cellist David Conrad Dhonau and rapper Zeropence Musick and others have created is a totally happening gathering of poets and dreamers I can wholeheartedly relate to on this evening. The Anerki set was totally in tune with the feeling of this night and their standard very high – and Mellow Harmony Avstreih was as never seen before – in tweeds and with a false beard (??!!) brilliantly taking on the persona of a psychopathic colonialist. Dhonau and the skinny electro-cello, and a lot of positive assertions about identity, culture, and race, dead on target by the collective.

You just knew that Penny and Eve Libertine and Louise Elliott were going to be special but..

‘Cobblestones Of Love’ is a piece that Penny admitted will never be ‘finished’ to his satisfaction. Preceded by what he called “a prayer” and a verse of ‘Somewhere’ movingly sung by Eve he was 100% those words come to life. Two great human contradictions – war and love ( as he told us he’s still trying to work out what ‘peace’ actually means.)Think beat poets and Jim Morrison on top form and Roy Harper’s ‘The Lords Prayer’ and you might be able to imagine what it was like.

At times Rimbaud crouches as if doubled up with the import and emotion of what he conveying. To say this was received with a stunned silence would be a cliché but that’s what it was, a stunned silence, an audience totally concentrating on the performance..

Eve said afterwards she didn’t do much but I reminded her about the Orwellian ” We Regret To Inform You..” chant she does that impersonates one of those hypocritical government announcements on TV and she laughed and said “Oh yes I do a lot of that!” In fact she provided a superbly effective counterpoint to Penny throughout. Even in silence she seemed to say something.

As for Louise Elliott.. I think she is past brilliant – her flute is enchanting, loveliness in the heart of darkness at times.. on saxophone she is simply world class. It says something that she could command a stage playing entirely solo. Responsive to the text, passionate and dazzlingly fluent she of the greatest sax players I have ever seen, fact.

I am blown away that all this happened in LEICESTER. We owe Sean Clark huge thanks for all his work in making all this happen. A lot of people took a lot home with them from this night. From that many more things can happen in our city. Leicester seems to be asserting its voice in the centre of England as a totally happening, creative place, vibrant with cultures and ideas. There’s an optimism that our cultures and art forms can merge, that we have ideas bigger than ourselves. For us our time has come.. and we can write it’s script – so LET’S GO!