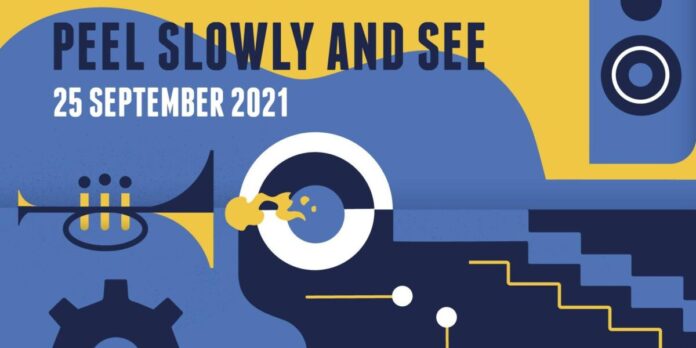 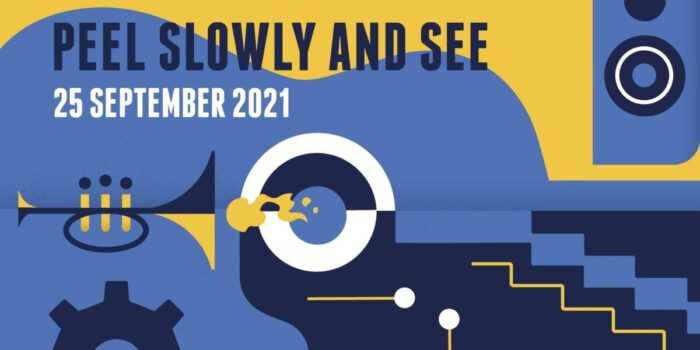 “It’s weird. Looking at this you couldn’t imagine that there was a pandemic going on. It’s as if the last year didn’t happen.” Michel, bassist in the legendary Leiden punk pranksters, Sugar Coated Mindbombs, certainly has a point. The artfully decorated alleyway between the three venues, Scheltema, Gebr. de Nobel and Marktsteeg 10 is packed with people chatting and laughing, reuniting after a long time away.  On the surface, it does look as if we are back in 2019, but there is an undercurrent of giddiness and awkwardness. Some old friends are jumped on and hugged, other meetings much more reserved, for no reason that comes to mind. How strange human interaction is, when you think about it.

First things first. Gebr. De Nobel is markedly improved. It used to be a cold and unwelcoming building with nowhere to sit, akin to being in a prison where they just happened to play music. A classic example of an architect designing a venue; a real plague in this land. Now the foyer stairs have been removed and there is somewhere to hang around and lounge. Gently lit, the foyer ebbs and flows to an audience flitting between venues and the subtle grooves set up by a team corralled by Leiden’s Maxi Radio. It’s actually one of the nicest welcomes I can think of.

The festival is unsurprisingly local-heavy. Though that isn’t such a COVID-driven thing as you may expect, though. PSAS always had an eye for what was happening under its nose. This edition is full of acts from underground and alternative scenes from both the local area (Katzwijm) and far flung bastions of cool (Groningen, Eindhoven, Nijmegen). And some illustrious local names such as Kapok and the marvellous Roosbeef. But on the night a number of outstanding gigs from international artists seal the deal and start to cement Peel Slowly and See’s growing reputation as an event to be reckoned with. If only those in charge of Leiden’s official music scenes could realise that there is a real thirst for different sounds and a huge international constituency to tap into. Or maybe student disco nights safely pay the bills…

Enough bitching; back to the talent. Kidbug, playing shoppe-cum-artisan-hang Marktsteeg 10, are a local Croatian-Australian duo; the kind of national construct that sends shivers down a nativist flag shagger’s spine. They have a winning way in pop, too; super cute melodies and some soft-as-duck’s down harmonies played off against guitars that churn out low-amp grunge. It’s an underpowered sound that is very moreish: a forever bedroom scene circa 1991. Sonic hypnosis doesn’t end there. The Kurdish artist and actor Brader Mûsikî’s beautiful, mellifluous storytelling had the cavernous Scheltema theatre enrapt; the music, driven by the tembûr, floating around like a dream. Perhaps his unruffled stage presence – he is an actor after all – gave a chatty audience pause for reflection. Later on, and after much bacchanalia elsewhere, Scheltema also hosts Brussels’ Avalanche Kaito. They are as their name suggests, an act who strike unexpectedly. And they are sensational. Quite what they sound like is another thing. Someone mentions they are like Black Midi and I can certainly see the comparison has some weight on one level, the wild flitting between sounds and rhythms, picking and dropping them like a frenzied root through a sock drawer. Post post post everything, I suppose. But still, and something very much unlike Black Midi; an enervating wall of noise given a focus by the incredible presence of singer, the Burkina Faso griot, Kaito Winse, who is both a magnet for the crowd and a realtime interpreter for the music. The other two lads shake out multiple refractions from rock’s prism. Again, (and like Black Midi, sorry), I can see them playing to a million people over Europe without anyone really understanding why it’s so addictive. The best kind of buzz. 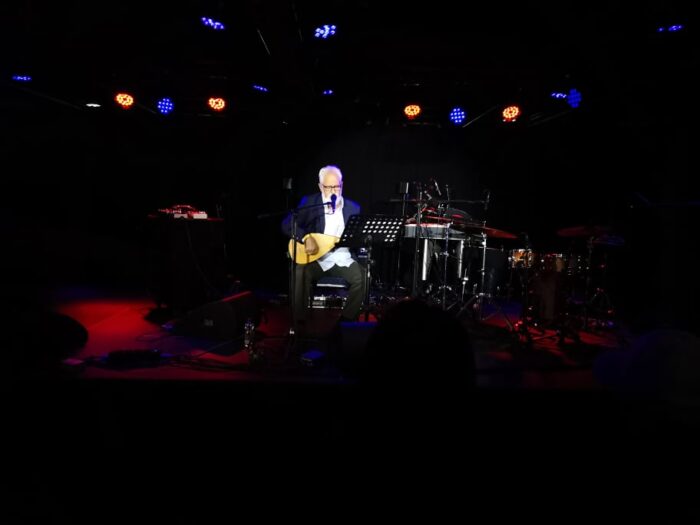 It would be nicer still if I could add the experience of watching Kayhan Kalhor and the Rembrandt Trio to this list. But being the opening gig, and a seated one at that, it is nigh on impossible to get into and then get seated without awkward shuffling. It’s like getting on the bus with bags of shopping. Once in and able to secure a berth, it’s difficult to get a proper hang on the intricate structures and persuasive rhythms the musicians create. The whole experience is like overhearing a fascinating conversation you missed the beginning of. The music “is” obviously very good indeed, I wish I could tell you more.

Firstly some snippets culled from three gigs. The gig from rap duo LIONSTORM is fantastic, frenzied, funny. A whirligig of colour and energy. Meindert Talma, eccentricity incarnate, a Dutch time traveller, sitting comfortably and mapping out the life of a Dutch Draughts champion, Jannes van der Wall. It’s the sort of thing that Lawrence of Felt or John Shuttleworth would do. Then there is Soccer Committee, magicking up gloriously aerial and reflective music that threatens to send the audience into another world. All of these need your time, especially if you’re Dutch. Eveuh nakijken, jongens! Sadly time is doing what it did in the Bowie song and my attention is held elsewhere, mainly in the small hall of De Nobel. Local act Howrah plays a set full of power and grace, their balance and skill allowing the songs from their splendid new LP, ‘Bliss’, a chance to shine. Howrah’s music is well worth your time; smart, confessional songs built round a very seductive mix of transatlantic post-rockisms and a little bit of Brotherhood-era New Order (side one, you dig?). Singer Kees Appledorn’s delivery is very open, fragile at times. Bending and bowing, he throws a lot of shapes, in some ways using the music as a way of explaining himself. It’s very endearing to watch, and I doubt if a younger band could get away with this kind of quiet apologia. Most of the audience know that all the band members have been around and there is a feeling of an old mates reunion. After all, there is some history on the stage, with the great band Space Siren’s rhythm section leaving golden afterburns that somehow don’t trample over the ingenious guitar interplay. It’s a gentle, oddly beautiful rock gig. 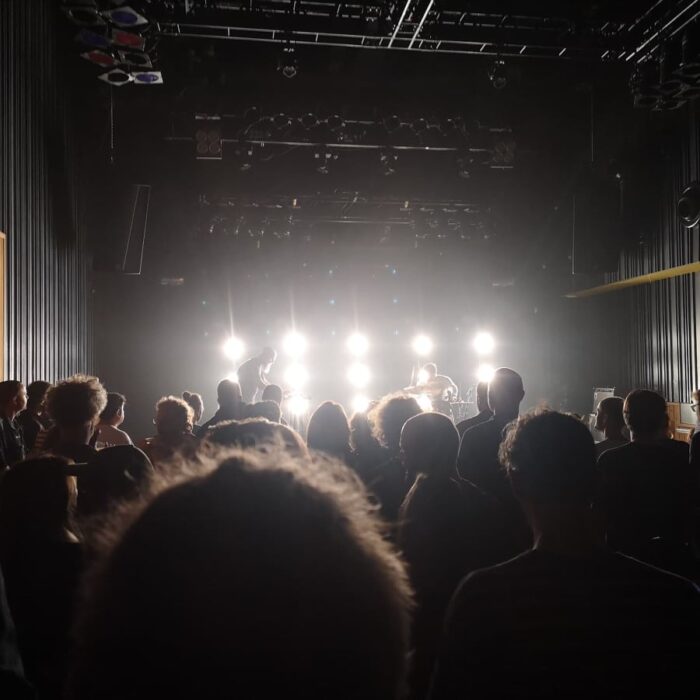 Life would be boring if it was all the same innit. Still, if I told my chin-stroking brethren that Otto from Dead Neanderthals had temporarily ditched the sax in favour of some newfangled nobs and gadgets, there could be minor tremors in North London and letters to The Wire. Fear not, all is well and we get a chance to appreciate another aspect of this revered noise duo. The Neanderthals knock out a mighty drone whose aim is to bore down through the Earth’s Mantle to its Liquid Core. That’s the mission and the audience is strapped in and going nowhere. Rene’s kick drum now and again directs the drilling and enables the electro soup Otto has made to infiltrate the borehole. We are hypnotised, like a bunch of old fellas standing at the side of a building site, getting kicks out of watching the diggers. There is one key change – a reversal of the simple chord pattern, which then reverts to the original chord pattern. But we are not here for hifalutin things such as chords or bridges or middle eights. Oh no, we are made aware of the transience of existence, we are the flies on the Neanderthals web, going nowhere but deeper and down. Suddenly it’s over. There is a twitch on the thread and we are released. We gape and gasp, like fishes landed on the riverbank. Utterly triumphant. Even if you can’t handle listening to them on record (some of their more magickal releases are a sure fire way to get my darling wife out of the house) they are one of this country’s greatest live acts.

A quick point about living in the modern world. Beverages now come in plastic glasses and it behoves me to tell you that after a couple of shandies I like the new, softer, more glass-like plastic glasses. So do many of the festival audience, and by the time Charlie and the Lesbians prowl onto the stage, we are in a jubilant mood. Backed by a huge rainbow flag, they charge into a set comprised mainly of new songs. There are fluffs and missteps. We cheer. Because, despite these fuck ups (and the accompanying grins of drummer Soesja and bassist Noortje) we know anything they do is great because they are beautiful people and they really, really don’t give a shit. They are the country’s most natural rock and roll band, there is no hint of any artifice, and everything they do has meaning. They should be massive or at least on Eurovision. Dum-dum-dum goes the bass, the guitar lines snap and spit and squeal complaint after complaint and Charlie prowls around the stage like he’s escaped from a Donald Duck movie. He is the focal point, transmitting and receiving all the energy squalls around him, like Roky Erikson. The noise heats up, the songs all sound like a fight between a bunch of tumble dryers. There is moshing. Suddenly, Charlie leaps like a stag evading hounds into the audience, a remarkably graceful jump, almost camp, and that just signals more abandon. There are people in tears near me. It’s glorious and beautiful and I really should stop writing before I well up.

A walk home, terug naar Oegstgeest, I reflect. A decade ago, Leiden had a vibrant, almost legendary international music scene driven by many places that aren’t there any more. It was probably the city where the most alternative fun was had in the country: driven by a great unofficial network of local fans, promoters, squatters, activists and knowledgeable bookers. A loose alliance that had room to act. This edition of Peel Slowly and See captured some of that spirit and reminded us that a lot of these people are still here. Back then, it was fun to reflect that almost no-one knew that on a wet Tuesday night, Future Islands played a bike shed to an audience of about 10 people and – if I remember rightly, a dog. That was then. Right now, anno 2021, please, in this city of great potential, can those sitting on their arses, watching their salaries, or fond of the sound of their own voices actually take note what Peel Slowly and See actually means? 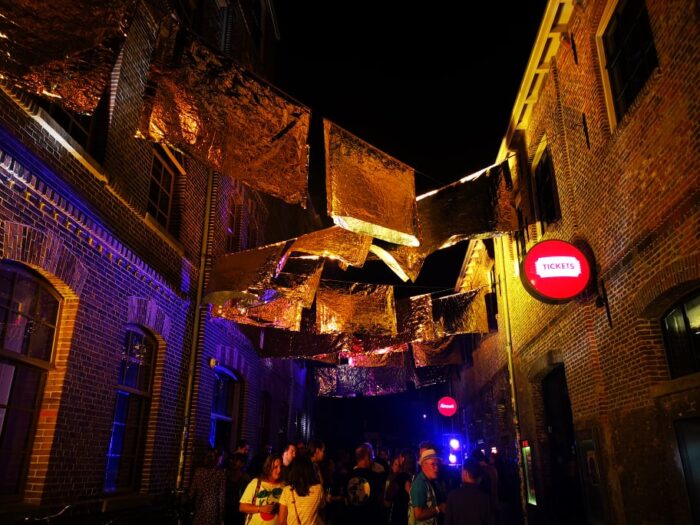