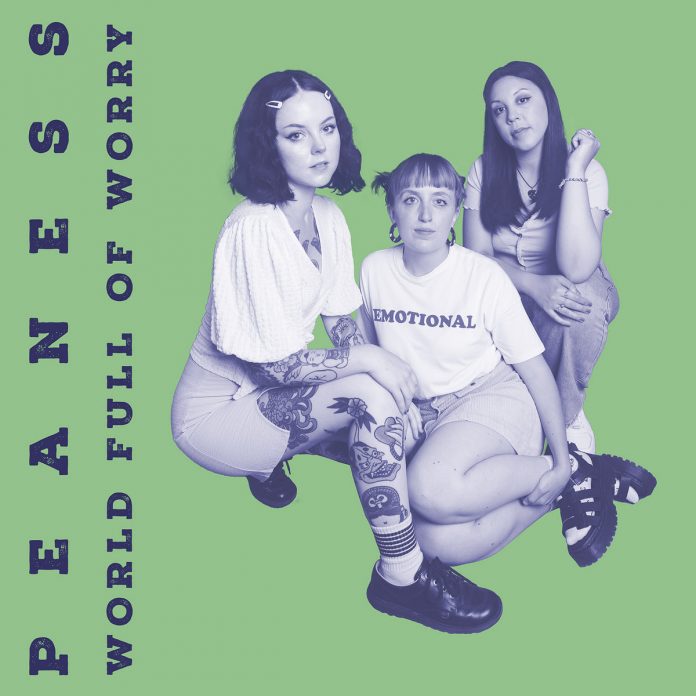 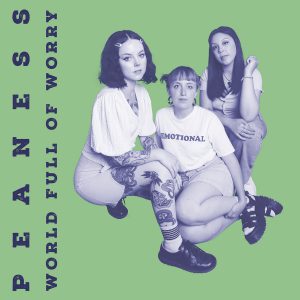 Out on 6th May

Peaness release their long-awaited debut album World Full Of Worry on 6th May through their label, Totally Snick Records.

Formed whilst in Chester University digs, Peaness, consist of Jess (bass and vocals); Rach (drums) and Balla (guitar and vocals). The trio have been playing together since summer 2015, and their fun, friendship-fuelled live performances have been winning the hearts and minds up and down the country ever since. Describing themselves as having ‘more hooks, charm and depth than a dozen identikit indie-boy bores’ their fuzzy, harmony-driven
songs focus on love, friendship, and mid-twenties frustrations.

Releasing singles and EP’s since 2015, most recently the band have been building up to the album with the releases What’s The Use; How I’m Feeling; Worry and irl. The timing of the album is perfect, Peaness’s sunshine-laden indie-pop sound certainly fits with the period of longer, brighter evenings we have ahead of us.

The opening Take A Trip gets things off to a gentle start, harmonies over a strummed guitar and the sound of the sea. It’s brief, welcoming and unlike anything else on World Full Of Worry. We’re then straight into Kaizen, a choppy, positive upbeat track which Jess explains, “is a song to remind myself that with every act of kindness and every crime, we affect the future, and that those choices go on to shape others, and our beautiful planet, long after we’re gone. The word ‘Kaizen’ is a Japanese word that literally translates to ‘change for the good’, and that’s what we’re hoping for.” This is then followed by the catchy How I’m Feeling follows, which is a reality check and wake up call to all in an unfulfilling job or to those which need a shake up with their lives who can’t ignore it anymore.

Girl Just Relax could be seen as advice for others, or possibily the singers subconscious speaking out loud. The ‘new’ songs are spread throughout the album and are as just as strong as those people will be aware of. One of the highlights of the album, the sardonic, irl (online chat acronym for ‘in real life’) is up next and possibly one which many can relate to; especially individuals who live vicariously through social media. The online persona not aligning with what’s happening in the day-to-day life. “It describes that craving for digital validation and the support of an echo chamber you’ve created for yourself, because that’s easier than talking to a professional about the state of your mental health, right?” The ladies are quick to add, “there’s no shame in seeking professional help. All three of us do.”

Worry follows Doing Fine and is where the albums title comes from; looking at how a serious breakup can impact on how you view the world around you, and yourself etc. Every now and again there are moments on the album when I had to do a ‘double take’, not that things have been ripped off but there are similarities in tunes or harmonies; the strongest of these is Left To Fall Behind which has a passing resemblance to The Wannadies, You and Me Song, not that I’m complaining, both are great tunes.

After this we are sadly in the home straight, as What’s The Use leads us towards the end of the journey. In a similar way to How I’m Feeling this is a bit of a slap hidden in an uptempo number to those who feel left out or are inclined to wait for things to happen to them. The track reassures us that you can “work it out with yourself if you choose to take the steps and do the work.” World Full Of Worry closes on Hurt ’til It Doesn’t and Sad Song, the latter leaving us with the sound of the sea. Peaness have delivered the aural equivalent of a sugar rush that leaves you exhilarated but with a bit of a come down. It won’t be long before you’re listening again though, and want to take again and again. A brilliant debut from a trio I’m looking forward to catching live soon

Over the years Peaness have toured extensively, whilst not locked down, with the likes of The Beths, The Cribs, We Are Scientists, She Drew The Gun, The Big Moon and Dream Wife, as well as performing at festival-circuit favourites such as Green Man, Benicassim, TRUCK, The Great Escape, 2000 Trees and Kendal Calling. They will be extensively touring during May and June promoting the album and have a couple of dates planned for later in the year also   . 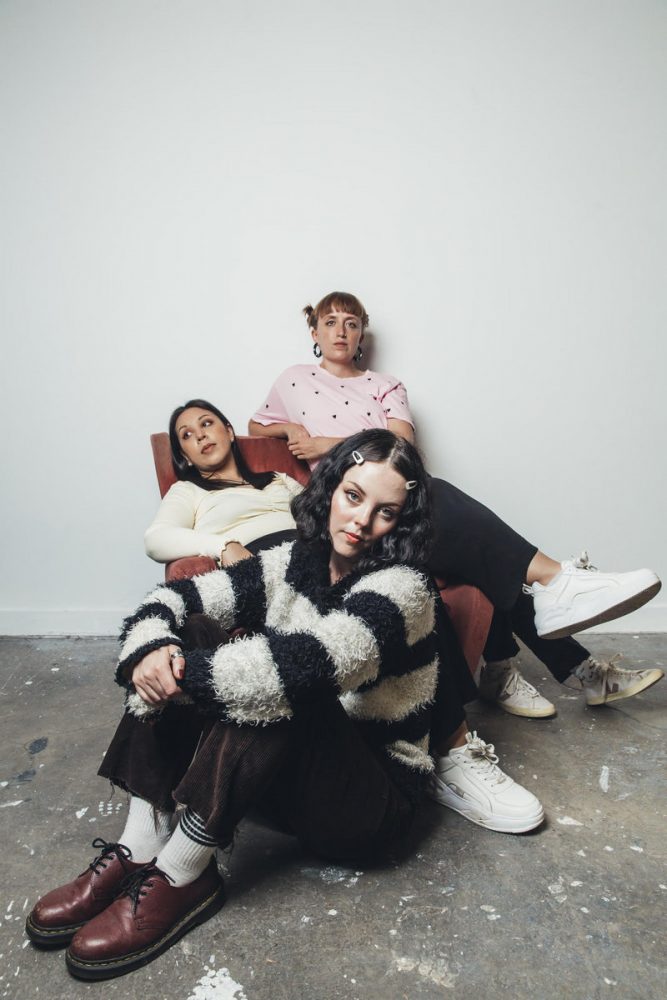