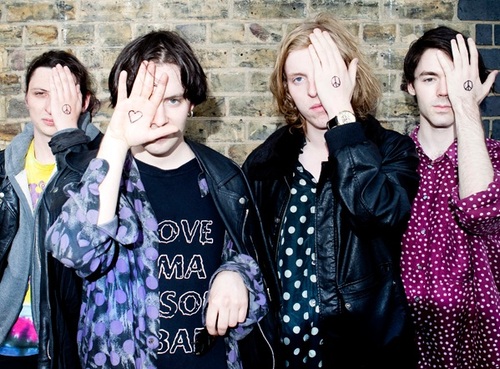 Birmingham’s Peace offer up proof that they weren’t just the flavour of 2013 with a show at London’s Hospital Club. Louder Than War’s George Henry king reviews.

Just like the refreshingly, gooey substance that pleasantly oozes out of a Bubbaloo bubble gum when you sink your teeth into it, Birmingham’s finest, indie-quartet, Peace first burst onto our taste buds with their debut E.P ‘Delicious’, in 2012.

Following the release of their Top 20, debut studio album, ‘In Love’, they quickly became one of the must-see acts on the 2013 festival circuit, and with the release of their eagerly anticipated, but as yet titled second album only a matter of months away, Peace are on the brink of becoming something truly spellbinding. And if this evening’s very intimate London gig at The Hospital Club, in conjunction with ‘Penguin’s Plugged In Session’, is anything to go by, the next journey that Peace are about to embark on will be nothing short of magical.

Having queued for a mere 15 minutes and played witness to a minor mugging, the distance between the entrance and I begins to dwindle, and collectively we proceed to enter emphatically into the usually ‘members only’ Hospital Club – like the group of reckless and hooded teenagers that bulldoze their way through the newsagents in the film, ‘Hot Fuzz’, after being ordered to do so in heroic fashion by Nicholas Angel (Simon Pegg).

Upon exchanging suspicious looks with the security guard – who is probably deludedly thinking we are all one line of coke away from jumping him and steeling the fancy rug from beneath his feet – we are quickly ushered through the fancy foyer, past the hand-made leather sofa, elaborate lampshade and Gramophone (I think I remember seeing a Gramophone – it wouldn’t surprise me if there was), up to the 4th floor, where we are told tonight’s gig is set to take place.

When I say ‘‘ushered quickly’’, I mean, quickly enough that we vanish out of the judging gaze of anyone who might choke on their caviar at the ghastly sight of an abundance of pocketless and denim yielding youths entering a slightly posh establishment – but not so quick that it looks like we’re a bunch of kids on a school trip that have just been lured with sweets and chocolate into the back of a strangers van.

After dragging myself up four floors of stairs – after been advised that it would be quicker to do so than taking the lift, although I don’t see how – I’m left bewildered, yet initially ecstatically surprised at the sight of where, Peace, a band who played the main stage at Reading and Leeds a mere two months ago, are this evening going to be performing.

I understand that this is an intimate gig with no more than 100 people in attendance, but the proximity between the stage and the audience couldn’t be more minimal. So I casually walk to the front of the 20cm high stage with no fear of being surpassed at the last second and having my place snatched from my grasp – a bit like how Usain Bolt finishes his 100m races.

With nothing in the form of a barrier really preventing members of the audience from running on stage and singing into the microphone themselves, I’m intrigued to see how the overall atmospheric vibe amongst the crowd will be once the gig gets underway. And as Peace appear from the confines of their pre-gig holding room, stroll past within touching distance and launch into opener, ‘Lovesick’, I immediately conclude that at no point throughout the duration of this sure to be emphatic set, will I and my fellow gig-goers partake in a mildly dangerous shoving match that I’d tonight happily invite, but usually painfully endure. I also most definitely know there will not be any opportunities for me to consistently embrace with them as they help me up off of the floor every five minutes – because at no point will I be on the floor.

Don’t get me wrong; this is by no means whatsoever any fault of the band themselves – throughout they are exceptional. And despite Harry’s chest infection supposedly hindering his vocal ability, his voice still sounds as immaculate as ever – as does the sound of the whole band – surprising when you compare the size of the venue to the size of the amps. But, being amongst so few people means I have the unwanted privilege of for once not being stuck to a sweaty stranger – which subsequently makes it difficult to gauge how to react to the songs and the band. 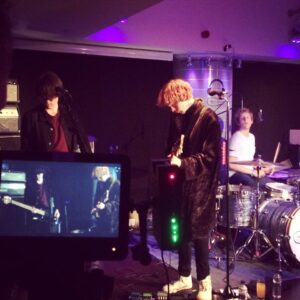 A couple in front of me for example are going ‘Jack Nicholson as The Shining’s Jack Torrance crazy’ for it – but far too enthusiastically for me to want to do the same myself. The rest of the crowd are just awkwardly nodding their head’s like Churchill, in appreciation of the brilliance we are all witnessing (Churchill, as in the one on your car dashboard not the famous Prime Minister) – and the suit-wearing London punters at the bar are just consistently and rudely talking as if they don’t even know who Peace are. The reason for that being because they are likely The Hospital Club’s ‘private members’, who come here every night to brag about the 21-year-old receptionist they are having an affair with.

”I love you Harrison” shouts an elated fan following the end note of Peace’s, Nirvana-esque, ‘Follow Baby’ – finally injecting some much-needed life into the very cooperate scenario we all find ourselves in, with a fitting tribute to a frontman who’s band’s whole ethos exists primarily on the basis of love.

And having recently said that they ‘are now taking this seriously’ and 2014 would be their year, Peace themselves, lifeless venue or not, follow-up that fan’s declaration of love by proving throughout the show, that they do undeniably have the songs to backup such an audacious, yet incredibly true statement.

Understandably, the 10-song set draws heavily from their debut album, with the exotic cocktail flavour’s of, ‘California Daze’, the sultry and seductive strut of ‘Wraith’ and the infectious groove of ‘Bloodshake’ all sparking the biggest sing-a-longs of the night. And although the only new tracks aired this evening are the three songs that have already been gracing the Radio 1 playlist for the past few months, they all go down like old favourites – implying that there is no reason why 2015 can’t also be this band’s year.

‘Money’ and ‘Lost On Me’ are especially well received from the newer selection – with the latter of two sounding significantly better live than it does on record. Sadly though, this evening the band opts against taking part in the choreographed and popular dance routine that they pull-off in the music video for the single.

Concluding their effortless set with ‘Bloodshake’, formerly known at ‘B-Blood’, Peace exit stage right without a bead of sweat on their brow, nor a reason to doubt the level of success they are more than capable of obtaining within the very near future.

The venue may have lacked the ability to capture any of the raunchy excitement that has been experienced at Peace gigs prior to this one, but the band themselves played their part exquisitely – and by inviting us to this very personal endeavor and gifting us with this intimate gesture, they let us bare witness to them in such close proximity, for what could be the last time.

Peace have been given a chance, and they sure as hell aren’t going to fuck it up.

Lost On Me Music Video

All words by George Henry King. More writing by George on Louder Than War can be found at his author’s archive. You can follow George on Twitter and via his own website.