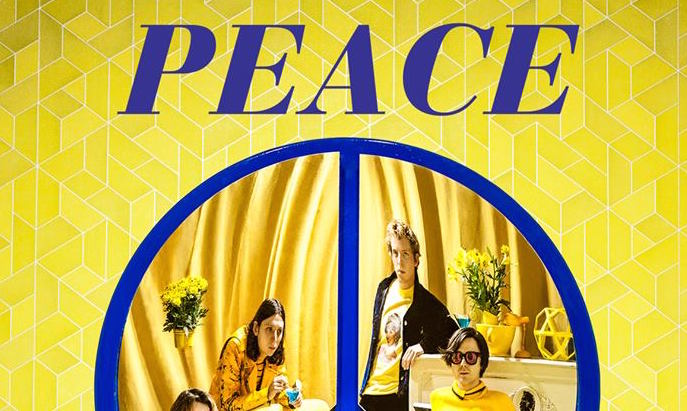 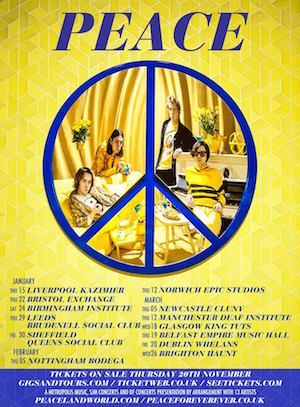 Pioneers of the B-town scene back in 2012, Peace have proven their worth by staying relevant longer than the scene which spawned them. Josh Norcliffe caught them in support of their forthcoming second LP.

In support of their second studio release, Peace were welcomed to the Brudenell Social Club in Leeds- where there was vomit, sweat and tears. Of course there were songs too, but a sea of depressingly young boozed up teenagers were just as impressive as the Worcester quartet.

2015 is an important year for Peace. Once hailed as “the future of indie”, they have the chance to further the bands preliminary success through Happy People, which is released next week through Columbia Records.

Support on the night came from Leeds guitar band Carnabells – who remain widely unknown despite enjoying approval from BBC Radio 1 and Radio 6 Music. Tonight was about Peace though, and the coming together between them and their aforementioned audience, in a cultural and quite literal sense, and as soon as we encountered the highs and lows of post-baggy inspired opener Higher Than The Sun, there was a clear feeling of absolute euphoria ringing round.

Follow Baby further denotes that, before the introduction of new material is met with rapturous applause, mainly because we’ve heard half of the new record already. Lost on Me is a standout highlight while Perfect Skin is instantly forgettable. Other chapters of Happy People are somewhat familiar sounding- just more polished and refined in places. Although they wear their influences too obviously at times, Peace are a good band who write well-crafted indie tunes with big choruses.

The quartet’s most tender moments; Float Forever and California Daze are then met with aloft arms as the sold-out Leeds head scream every single lyric and guitar line back at Koisser et al.  Sugarstone is then given a rare outing before Lovesick, I’m a Girl and World Pleasure cap off a victorious night. World Pleasure is prematurely stopped as fans take to the stage to bask in all of Peace’s glory and show worship for frontman Harry Koisser who’s a star.

While they may not be changing the world, Peace’s project has legs- they make decent records, and through the support of adoring fans, the Worcester band are essential to British Indie today as well as the live circuit- and should be admired for it.

All words by Josh Norcliffe. From Josh can be found at his Louder Than War Author’s Archive.