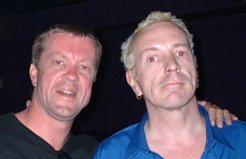 Paul Wellings was born and raised in the London Overspill suburbs in the sixties, the eldest son of a P.E teacher and school assistant. He has one brother. After starting his journalistic career on the regional press, Paul landed a prestigious freelance job on the pop press with the NME, thanks to his best man Tony Parsons. He was the first to write about the r’n’b soul scene and its links with the soccer casual movement. In the early ‘80s his group the Anti Social Workers released an LP, produced by the legendary reggae producer the Mad Professor (of Massive Attack fame), to rave reviews. The group supported reggae legend Peter Tosh (Bob Marley’s partner) on tour. He has also worked on the showbiz pages of the Daily Mirror and London’s Evening Standard.

As a sideline he was a two-step soul DJ with underground radio stations Laser and LWR (the station that launched Radio 1’s Tim Westwood). He has appeared on more than 20 TV shows discussing black music, youth culture, soccer casuals, and pirate radio and is appearing in S.O.U.L – the major ITV documentary about the history of black culture. He has written five books – This is The Modern Word, East Ending, The Chaps, I’m a Journalist…Get Me out of Here, about his life on the NME and theDaily Mirror, and Spend It Like Beckham – plus the screenplay Thieves. His latest book is Sex,Lines and Videotape, published in 2006. He has also contributed to MOJO and Echoes.In 1991 he moved into PR where he has a full-time career as well as being a freelance journalist for the Independent.

Stop Press: His new book The Divine Comedians featuring the funniest quotes from radical stand-up comedy was published by The Progressive Press in June 2012.

Excuse the shameless self-publicity! I’m embarrassed by bits of it now even though the Mad Professor is thinking of re-mixing it in dub 2016 style. But it was unlike anything else around at the time – the NME’s X Moore called it ‘an album set apart’. It comprised three London overspill punk herberts spitting bars over heavy dub riddims by England’s greatest reggae producer. Heavily influenced by The Clash, Gil Scott Heron, Dillinger it was a sound that would be used by people like Massive Attack, Jamie T and The Streets in years to come. We would tour with everyone from reggae icons like Peter Tosh and Eek A Mouse to our punk compadres The Neurotics, Billy Bragg, Attila, Seething Wells, and the Redskins at every benefit gig going including the 24 hour vigil outside South Africa House for the release of Mandela and the legendary gig reviewed by the NME at the Bletchley Compass Club where we stood toe to toe fighting nazi skinheads who’d invaded the stage with the biggest Reds v Nazis tear up since The Battle of Stalingrad! I’ve still got the scars to prove it. I remember going into a club recently and hearing my sped-up voice sounding like Minnie Mouse on helium on the tune ‘Who’s Watching You’ blasting out. Bizarre.

My favourite musical as it featured a cool Sinatra and Brando in a tale written by one of my favourite American writers Damon Runyon about gangsters and molls. My old NME compadre Tony Parsons reminded me how good it was when I used to stay round his house and we played it at my wedding reception where he was best man and he toasted ‘life, love and liberty’. This was long before he became a bit of a UKIP ball-sack I hasten to add!

8. Stevie Wonder – Songs in the key of life

This reminds me of my school days and some American kid bringing it to our rough and tough comprehensive in the London Newtowns and playing ‘I wish’ at the school assembly. Remember vividly me and my guttersnipe mates singing the line ‘hang out with those hoodlum friends of mine’. Probably the greatest soul/funk album of all time. Conscious lyrics, conscious multi-intrumentalism from Stevie.

Probably my favourite artist ever – the godfather of rap. I was lucky to review him live for the NME at Ken Livingstone’s free GLC Festival and I remember writing ‘this man matters – seize the time’. I love this album because I think he’s at the top of his game here with tracks like ‘Blue Collar ‘ which reminds me of my favourite movie of the same name with Richard Pryor and Harvey Keitel.

6. Misty In Roots – live at the Counter Eurovision.

Top drawer UK reggae album – love the speech at the beginning, it’s almost spiritual. This was the late, great John Peel’s favourite album too and I used to follow them all over the country as a kid and inteviewed them many times. I even nicked some of their skanking dance moves when I performed with the Anti Social Workers.