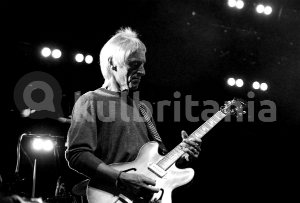 Umbria is a small Italian town in the Perugia region, a pretty spectacular location to organise this new music Festival. The audience was made up mostly of locals, some British travellers and some other Italians who had decided to travel to Umbria to see some of the Best British artists of all time, Paul Weller.

Weller took to the stage at about 10:30 pm and much of the crowd, who were there to see all the other British acts as well from the Cribs to Manchester acts like The Charlatans, James and Peter Hook, were there to enjoy one of Britains finest, Paul Weller and ….of course, he didnt disappoint at all.

It was a gig full of his classic tunes, from The Jam days to The Style Council and also newer stuff from his critically-acclaimed albums Wake Up The Nation and Sonik Kicks.

The Italian crowd cheered as they heard the Modfather delivered every tune. Yet, we must admit that the biggest cheers came when Weller played any of The Jam’s or Style Council’s back catalogue or even his older stuff as a solo artist like tracks taken from Stanley Road or Wild Wood. But before The Jam’s classics, it was the time for yet another great tune “My ever Changing Moods” song from The Style Council days which reached No. 29 on the Billboard Hot 100 in the US and which still remains one of Weller’s greatest success in the US. Yet the crowd went absolutely mental when Jam classics like “Start” and “A Town Called Malice” were played.

Accompanying him on stage was his usual band including guitarist Steve Cradock. We were just talking to some mates there in Umbria and we all agreed that Weller is one of those musicians who just can’t do the same for long. The Modfather has reinvented himself through The Jam,The Style Council and as a successful solo artist. The thing with Weller is that it seems he has never got it wrong, not even once and his fanbase is just proof of that. He has experimented over the past decade or so with new and different musical styles and the result has always been critical acclaim and great music. He may drop the occasional old classics but he is not the kind of artist who takes fans on a nostalgic trip through his old catalogue. He is proud of his new stuff and so are his devoted fans; young and old.

As the night progressed, Weller dropped a few more gems from “Broken Stones” to “You Do something to me”, both taken from critically acclaimed album “Stanley Road” released in 1995.

The set came to a close when Weller was joined onstage by Charlatans’ frontman Tim Burgess for a rendition of The Jam’s classic “A Town Called Malice”. This just reminded us of the time Burgess was invited to play “We all need love” back at The Wiltern Theatre in Los Angeles back in 2005.

There is no denying that Weller was the voice of a generation paving the way to bands such as Oasis, Blur and all the other bands during the Britpop days and still is the voice of the generations to come and probably one of the most influential artists of the last 30 years.

We will see what’s next for the Modfather with the promise of a new studio album release at the beginning of 2015.

Seeing Paul Weller on Saturday night (02.08) was a wonderful experience that many of those who attended the show at Umbria Rock will surely cherish for the rest of their lives. We thought he was going to be good but we were wrong….he was absolutely fantastic!!!

Hats off then to the organisers who brought Paul Weller to the heart of the Italian region for all of us to enjoy one of Britain’s finest.