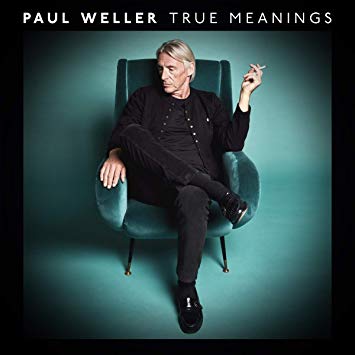 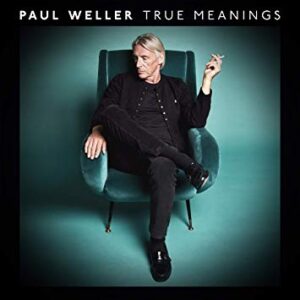 Paul Weller. Modfather, spokesperson for a generation, fashion icon or one of England’s best ever singer/songwriters. Call him what you will but Paul has reinvented himself musically and visually more times than Mr Benn. His new album True Meanings sees him take a break from the full band normality, this time branching out with a set of acoustic guitar led songs, harking to those all-time classic artists that championed the 6 and 12 string: Nick Drake, Bob Dylan and Neil Young.

My first experiences of listening to Paul’s music would’ve been when I was a mere toddler, literally. My older brothers Nicholas and Steven (9 and 14 gap respectively between me and them) were The Jam obsessed in the late 70’s/early 80’s, travelling from Skegness to Wembley to see the fab 3. So you might say I’ve had an education in Weller from a young age, and would be correct.

Back to the current day. After being sent the link to the new album, I settled down over lunch at work, plugged in my earphones, pressed play and let the Modfather’s latest piece of work wash over me. What struck me when listening to the record in its entirety is Paul has managed to keep to the simple things here, not taking away anything from the sheer brilliance of the song writing/singing, the lush orchestration and the showmanship of the instrumentation, but I’ve witnessed many an acoustic album that singles out the artist singing and performing in a naked setting that can either leave the artist bare to criticism or awash with accolades, the latter is what you will find here. Sometimes you don’t need to mess with simplicity, just let natural talent force its way through the cloud of complication. Thank you Paul.

The album starts off with Soul Searchers. Clear crisp acoustic guitar, shuffling drums, tinkling keyboard fills, Weller sings ‘here’s one for the searching soul in the midnight’, bass guitar swoons in with rich orchestration, the song goes on a jazz funk folk sojourn. The rest of the album follows in stunningly similar fashion.

Next track Glide follows the acoustic guitars and heavy orchestration pattern, sprinkling magic upon the speakers, Weller delicately singing, almost Dylan-esque at times, but in tune. Mayfly has a T Rex type opening, ‘I am waiting like a mayfly, cold and lonely waiting for daylight’, Hammond organ warming the song with the addition of slick guitar fills.

Singles Gravity, Aspects and Movin’ On are strong indicators of what you will hear with this collection of songs, track Old Castles is a jazz type number which would fit nicely on TSC Our Favourite Shop. There’s a track on here entitled Bowie which would appear to be named after the departed David Bowie, Weller sings ‘you were just mortal like me’, harking to Bowie going beyond the veil and leaving this earthly kin. There are further musical delights to warm the heart here. Books showcases Sitar guitar fabulously, Wishing Well has heart-warming vibraphone with Weller wistfully singing ‘there’s a girl down the wishing well, throw my change’, maybe harking to a time when he might’ve seen a reflection of one of this children in a wishing well, who knows, who cares when the songs are this good.

Final grandstand track White Horses opens with organ, then soft impassioned vocals welcomes in the listener with a catchy chorus finishing with a full band gallop. This album really is something to behold and should see many glories hitting the back of the Weller net again and again.

What do they say ‘life begins at 60?’. So it would seem with Mr Paul Weller.