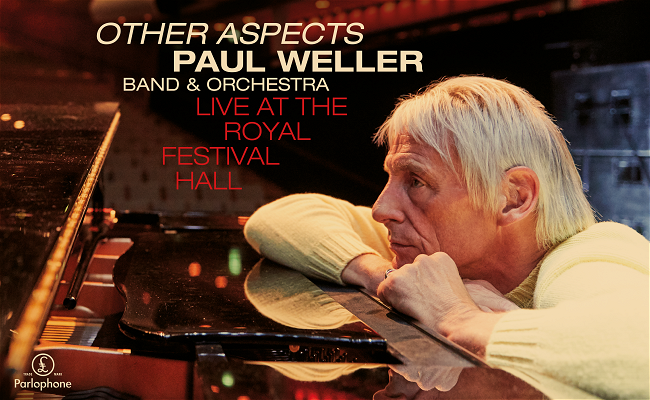 Following the release of Paul Weller’s acoustic masterpiece album True Meanings, Paul and his live band played some spine tingling live concerts with a full orchestra at the Royal Festival Hall in London. Other Aspects: Live at the Royal Festival Hall is the latest in a long line of stunning live albums by The Modfather which was released on 8th March 2019 by Parlophone records. Matt Mead reviews the album for Louder Than War.

Many of the online forums reported these concerts to be something probably never to be repeated that will live long in the memory of those parka wearing Jam fans, to the Pringle cardigan wearing Style Council fans and the younger boys/girls about town who were fortuitous enough to grab hold of a ticket or 2. Luckily for those that weren’t able to be in that same room as the favoured few the gigs were recorded for posterity and what a treat has be preserved.

Paul gifts the listener to a few surprises from his impressive back catalogue. The flamenco feel of One Bright Star from 2008’s 22 Dreams kicks the set off, with the delightfully delicate Where’er Ye Go doubling up from the same album, the rare groove of Amongst Butterflies and the stand alone Strange Museum make a subtle appearance from his debut self-titled solo album, finally the poetic Country from 1993’s highly lauded Wild Wood weaves its way into the night.

Some stand out additions to the set include Boy About Town taken from The Jam’s 1980 Sound Affects and Private Hell taken from Setting Sons from 1979. Boy About Town is set to a popular beat, as was the original, but this new version is refreshingly buoyant, possibly even more so than the original. Private Hell is special. When I say special it belongs long side the lasting legacy that has seen A Day In The Life, Waterloo Sunset and All Or Nothing grab the nations hearts. The new arrangement is a radical reworking of the original, jaw dropping even.

11 songs from the gorgeous True Meanings feature along with The Style Councils Have You Ever Had It Blue and A Man Of Great Promise with other solid favourites You Do Something To Me, Wild Wood and Tales From The Riverbank getting a run out in the squad. The orchestration is meticulous throughout, with Paul’s assured, soulful voice blending perfectly with his regular touring band, the fusion of all on stage is an impeccable. The release is out on triple vinyl + DVD/ 2 CD + DVD set. The DVD features the full concert coupled backstage rehearsal footage impressively detailed through a mini documentary with interviews with all involved who made the concerts feel so personal to all who will view the proceedings. If you decide to buy one live album this year, make sure Other Aspects is top of the tree.