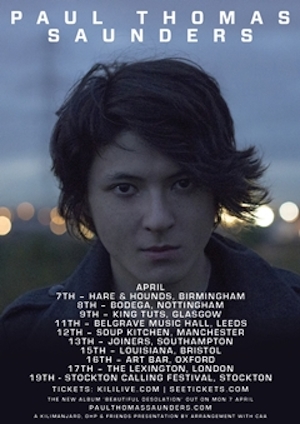 Paul Thomas Saunders brings his synth folk poetics to The Lexington and Keith Goldhanger is in attendance.

If the previous evenings entertainment in this part of the capital (provided by those Fat White Family chaps again) was a raucous and unruly drunken glorious mess, then 24 hrs later, a mile or so down the road, tonight’s gig is basically the complete opposite.

Paul Thomas Saunders is a likeble polite young chap who had just released an album – Beautiful Desolation – of utter beauty and refreshing brilliance. At one point tonight his in between song banter began by mentioning this album for reasons we’ll never now know since those in attendance let go of their partners hands put down their refreshments and just whooped and applauded just in response to the mentioning of its existence. How must that feel for anyone to have completed a piece of music and stand in front of a couple of hundred people and soak in that kind of appreciation?

We all appreciate, I’m sure that life isn’t just sountracked by the hollering shouty combo’s that are looking for their next pint before they’ve completed the present one. Some of us have to listen to stuff like this at 4am once insomnia has taken over our lives and some of us are still not tired of our Deserters Songs (Mercury Rev) album, or Sigur Ros back catalogs and will never apologise for such things.

This is a great time to see Paul Thomas Saunders perform in a venue like the Lexington. An intimate room full of people communicating with each other via the odd discreet whisper and paying so much attention to what’s going on up on this stage that there’s not even the site of the raised hand holding a camera which I’m sure you’ll agree is a rarity nowadays. Each song is full of pitch perfect echoed vocals, each song is one to be embraced and used as a foundation for a future that’ll interest the hoards currently heading to the venues currently hosting bands like Elbow and Coldplay to spend good money on with thousands of others.

The three peple behind him playing percussion, keys and additional guitar are equally as important as the young man however even a couple of acoustic tunes to send us all home are as touching and sublime as everything else that has proceeded the end of the evening.

Sigor Ros without the weird bits, the romance of Echo and the Bunnymen‘s Ocean Rain period, that tune that reminds at least one of us of Cockney Rebel’s Sebastien, a nod to Buckey, a bit of Radiohead (again, without any of the weird bits), a must for people who like to eat their dinner listening to Fleet Foxes and an album just released that’ll probably be up there with the all the other Mercury music prize nominations later this year that’ll have people arguing, cursing and claiming it not to be as good as the East India Youth one.

Paul Thomas Saunders, a pleasure to know your music sir.

A wonderful soundtrack for a diminishing hangover