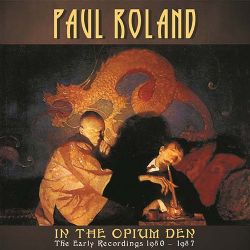 I first became aware of Paul Roland through his contributions to the old “Sounds” music paper, but his music is something I was only vaguely aware of. Seems to me on listening to this double CD assortment I’ve missed out big time. Reminiscent of his one-time Armageddon Records label mate Robyn Hitchcock and with a voice kind of like the Only Ones’ Peter Perrett (especially on the earlier “Midnight Rags” stuff), Roland specialised in a peculiar take on UK Psychedelia’s obsession with the late 19th century and other points in history in the far flung past, with his added interests in horror, folk devils and murder. So much so that he has been credited in some area with inventing “Steampunk Music” (whatever the Dickens that might be).

In suitably inscrutable fashion, this collection starts with the most recent albums first and works its way backwards. “Dance Macabre” is perhaps his masterpiece – Eleven sepia-tinted excellently constructed novellas wrapped in pristine Psych Pop, totally out of step with the modern world of music at the time and benefiting hugely from the fact. “The Great Edwardian Air Raid” is probably where the “Steampunk” epithet comes from – the story of an imagined airship raid on London which is beautifully detailed and related.

Also on “Dance Macabre” we hear love songs to ghosts (the beautiful “Gabrielle”), odes to the Witchfinder General and hanging judges, and a story of press ganging plus a nice cover of Pink Floyd’s “Matilda Mother” which cements the link to Syd Barrett that a lot of his work recalls without being merely a sound-alike.

“Burnt Orchids” from 1985 acts as a blueprint to the above, but musically suffers a little from a very “80s” drum sound/machine (I could be wrong but it does sound like it to me). It’s made up for by some good fiddle work on the title track and the stinging guitar and flute on “Captain Blood”. The sinister life on the ocean waves rears its head again on “Ghost Ships” and the scary tale of “The Puppet Master” would give one many sleepless nights if it wasn’t so darn catchy. This disc finishes with a couple of EP tracks in the fey foppery of “Beau Brummel” and a trip to the decadent German of the 1930s in “Berlin”.

Moving on to Disc 2 which begins with the “Werewolves Of London” LP that was originally credited to the Midnight Rags, though being all Roland compositions. It’s here that his voice most closely sounds like Perrett, but the horror stories and Edwardian era concerns were already in place (a tribute to actor Lon Chaney is particularly effective) plus a nice Garage Psych sound. At times this album could almost be superior New Wave pop like XTC or Magazine but it’s always pulling in weirder directions, witness the First World War “Flying Ace” and I can’t remember Gary Numan professing to be the “Blades Of Battenburg” (though I will stand corrected if that is the case).

The single “Hot George/Oscar Automobile” came out under the name Beau Brummel and featured Knox of the Vibrators along with the great Andy Ellison (stuntman and singer with John’s Children, Jet and the Radio Stars). These tracks reveal Roland’s long running obsession with Marc Bolan (he wrote a biography of the man entitled “Bolan Boogie”).

These early recordings are fascinating if a bit rough and they show an artist trying to find his own individual voice through experimentation with the sounds and singers he admired. Though at the developmental stage it’s clear that Paul Roland has a unique gift for song writing unlike anyone else and the imagination on display is formidable. There’s so much to enjoy – we clearly are in the presence of a master story-teller.

Overall there is plenty here to suggest that Roland is one of the UK’s best secrets – but why keep it so clandestine? It’s captivating to follow the career of the man from day one here and the recordings on these CDs show celebration has long been overdue and Roland belongs alongside great British musical eccentrics like Ivor Cutler, Robyn Hitchcock, Momus and Billy Childish.