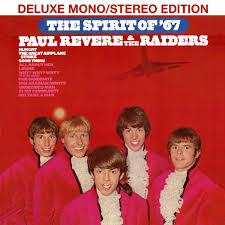 Paul Revere and the Raiders

CD release of the Raiders’ hugely successful sixth album, containing the US hit singles “Hungry”, “Good Thing” and the wonderfully titled “The Great Airplane Strike”. It is presented here in both stereo and the rare mono version and plus bonus three tracks. Ian Canty dons his frilly shirt and knickerbockers and finds out about local retaliation to the British Invasion……

Paul Revere and the Raiders had a long, long history before they got to this, possibly their best album. They had initially began way back in 1958 as an instrumental outfit and clocked their first chart hit in 1961 with “Like Long Hair”. Things really began to take off for them with the return of keyboardist Revere from his national service and him re-enlisting frontman/saxophonist Mark Lindsay to the group a year later. It has become a point of contention, who recorded “Louie Louie” first, the Kingsmen or the Raiders? Though it appears they both were at the same studio working on the same track at roughly the same time, the Kingsmen of course went onto have a big hit whilst the Raiders version stopped short outside of the Hot 100. But, come 1965, that was all forgotten…..

The “British Invasion” had changed everything in terms of music in the USA and of course a lot of the locals wanted to beat the UK contingent at their own game. Though the Raiders had been around a while and many artists of their vintage struggled to adapt to the rapid changes of the 60s, they shimmied right into the new scene with barely a misstep. It only really came off though in their homeland as they were more or less unknown over here (though across the border from the US in Canada they charted regularly), but in the States they were massive for many years.

Though by this time their recordings were “embellished” by outside musicians under the watchful eye of Beach Boys associate Terry Melcher, Paul Revere and the Raiders were always steeped in Garage band culture, from the slightly corny Civil War imagery and costumes (though on reflection I could go for one of those smart red jackets), to the full-on “party hearty” thrust of the music, to the fact that beneath the veneer of studio sheen there was always a raw, fuzz-ridden Punk attitude deep down in whatever context it was presented. We tend in this day and age to think of Garage as an “underground” phenomenon but the Raiders were on “Where The Action Is” pumping out that very sound five days a week on national television, whilst also undertaking the kind of gruelling recording and touring schedule that would render most of today’s bands unconscious.

Heralded by the skilful welding of Beach Boys harmony vocals to a tough punky sound of “Good Thing” (which American record buyers took to their hearts, launching it right up to number 4 on the Billboard charts), “The Spirit Of ’67” was unleashed on the public in November 1966 and became an immediate hit, going onto earn a gold record in the States. The singles are uniformly superb, with “Hungry” and “The Great Airplane Strike” also hitting the upper reaches of the chart with the Raiders built-in aggression shining through the elaborate arrangements. Lindsay even pre-empts Feargal Sharkey a tad with his squalling vocals on “Hungry”!

As for the rest of the album itself, it dots around all over the place in a most endearing fashion, with the changes of tack never removing their bite or knack for memorable tunes. The Raiders and their management always had an eye on what was coming up and attempted to graft any fleeting trends into the band’s sound, which of course set them up for charges of bandwagon jumping but was aurally irresistible. “Why? Why? Why? (Is It So Hard)” after a slow start, builds to nice mid-paced bit of Folk Rock, “In My Community” is the Raiders’ protest song and whilst “Undecided Man” may be a bit too “Eleanor Rigby” for some, “1001 Arabian Knights” transcends some iffy lyrics with comic backing vocals aping sitars and a fine bit of “We Will Fall” style Psychedelic moodiness.

The playing and singing is excellent throughout, but the polished performances never take away the Garage core values of Paul Revere and the Raiders and to that end we get tough rockers like “Our Candidate” and “Louise” plus the single cuts. It is odd but typical of the band that they did not take the “easy option” of using the ballads for singles, issuing the harder, rockier songs instead, but the courage in their convictions clearly bore fruit. Over the course of the record, the changes of pace and style knit together perfectly, resulting in perhaps the quintessential mid-60s US Pop LP. It is truly great, even listening to it 50 years on.

This new reissue brings together both stereo and mono versions, but not being much of an audiophile I couldn’t detect too much of a difference between the two (perhaps the Mono version sounded a little bit more punchy?). Both versions sound good and clear to me. Of the bonus tracks, the alternate version of “Hungry” features the “we can both stay stoned” line that the record company pretended had been erased by mistake to get around having to ban it! It has a bit of a different intro, but that doesn’t alter what was a very strong song to begin with. “(You’re A) Bad Girl”, a track that just missed making the album, has a nice Stonesy swagger to it and the mono single take of “The Great Airplane Strike” is not really discernibly different from the other two on this collection, but good to have in terms of completion.

After the release of this record the band haemorrhaged leaving just core members Revere and Lindsay. The winds of change from the hopeful mid-decade were turning towards the more cynical later 60s and the Raiders would be rendered unhip by the coming wave of full-blown Psychedelic acts. Typically, though not being viewed as remotely trendy anymore, they were resilient on holding onto their chart success, scoring hits right up to 1973 including their only number one in “Indian Reservation”.

Paul Revere and the Raiders may not be the trendiest 60s US Garage band, due to their high media profile, premeditated image and long-running chart success. Though focussed on 7″ inch singles they were more than capable of knocking out brilliant albums like “The Spirit Of ’67”, which are as good if not better than any cut by the more hip brigade in the same era. The Brtis missed out but yes, the Americans were coming, indeed. No true 60s maniac should be without it!