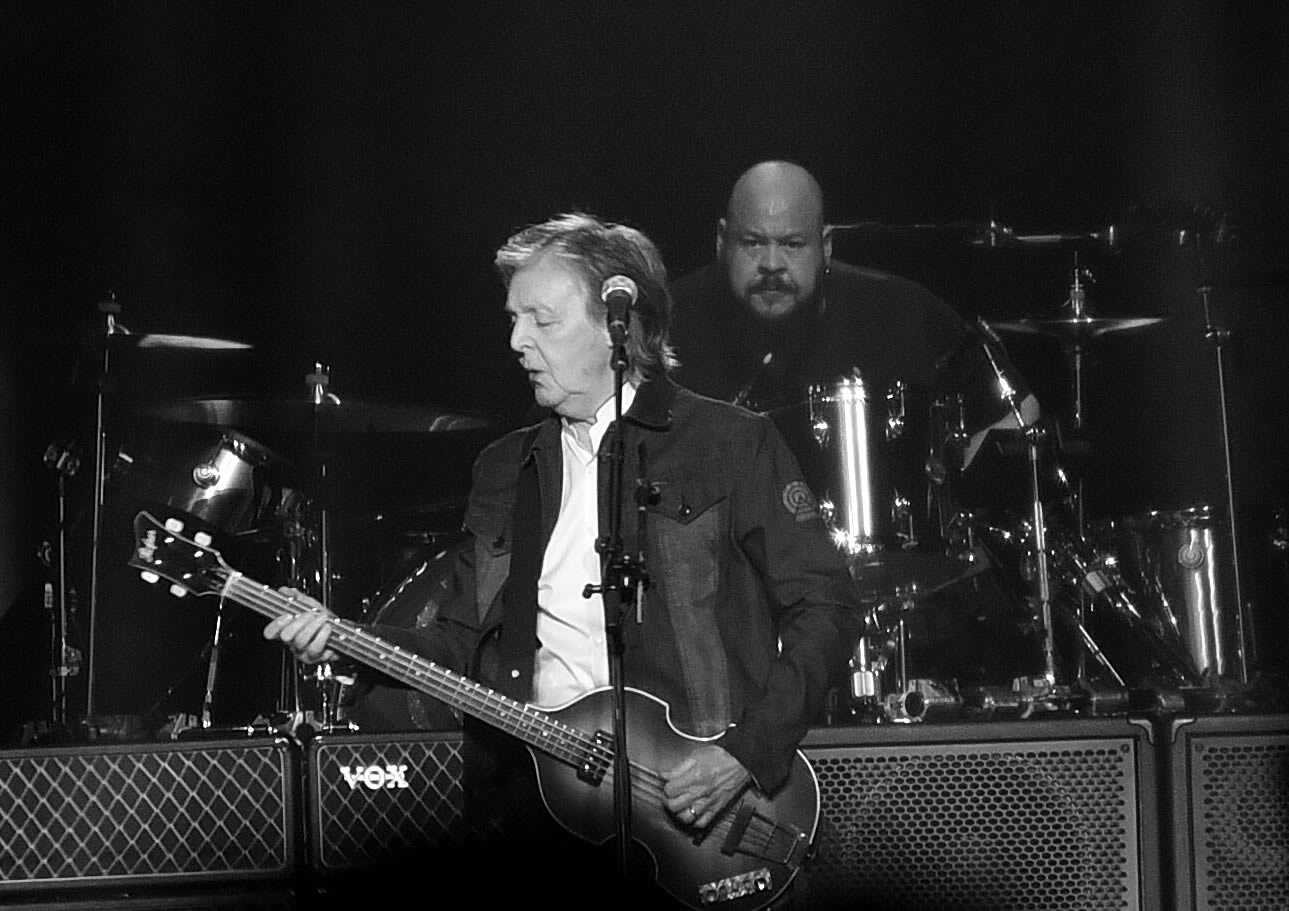 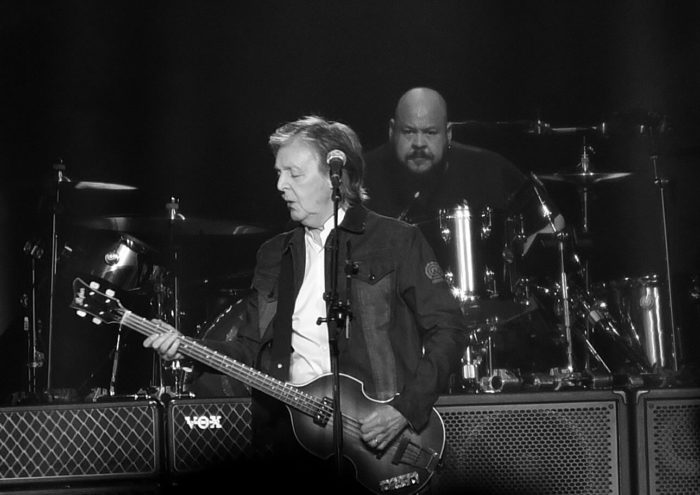 A man who needs no introduction, Paul McCartney brought his Freshen Up tour to the Liverpool Arena last night after a three-year hiatus. A slightly overwhelmed Nigel Carr reports back for Louder Than War with photos by Steve Hampson.

I stepped in at the last minute for this one and frankly never expected to be reviewing such an iconic entertainer, with possibly the most impressive back catalogue of any artist I have covered

It’s more than 60 years since a 16-year-old McCartney cut his first record in a booth in Kensington with schoolmates The Quarrymen. The Everly Brothers, a big influence on the young Liverpudlian were number one at the time with All I Have To Do Is Dream. One of the songs they recorded, ‘In Spite Of All The Danger’ plays centrepiece to tonight’s gig, where Paul explained how he had bought the original record back from piano player John Lowe after more than 20 years! (At over £250,000 it is now the most valuable record in the world!)

The stage at the Arena blasts out McCartney songs right back to his Hamburg days including track after track from the Beatles’ illustrious career, to a moving vertical backdrop of old photos of Paul and the lads. From their leather-clad rock n roll days through psychedelia and the later beardy years!

Opening with A Hard Day’s Night, the crowd are immediately on their feet, and it’s hard to believe that I’m listening to ‘a Beatle’ singing it. The crowd is packed with people from all over the world. The Japanese guy in front of me has been throwing his arms In the air all through the warm-up and literally goes mad when he sees his idol on stage! 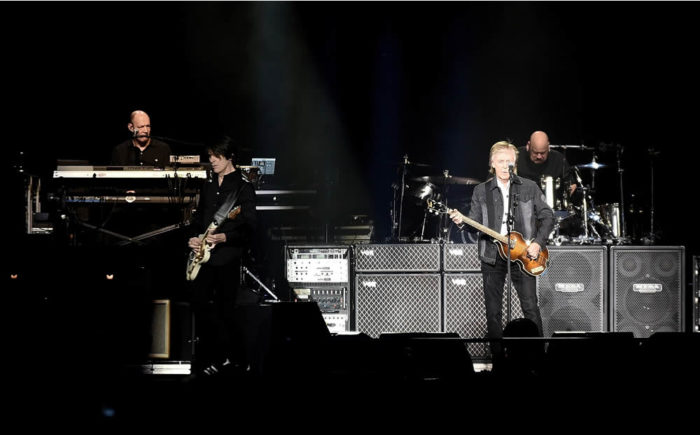 A rarely heard Junior’s Farm, the 70s Wings song gives way to All My Loving and it’s pure joy to see the backdrop of black and white scenes of the lads and Wilfred Brambell in the film, A Hard Day’s Night.

During Letting Go, the brass section appears halfway down the arena up one of the stairways, one of the many surprises to entertain us tonight!

In a set of forty songs, it’s impossible to go through each and every one but McCartney keeps the audience engaged throughout, relaying the history behind each of the tracks he plays. Who Cares, a song about bullying, and that scene with James Corden when he went back to the house where he lived in Liverpool and how the female custodian made them pay to get in!

He picks up a big psychedelically painted Gibson for Let Me Roll With It and tells the story of Jimi Hendrix opening his show with Sgt Pepper on the day that the album came out! Big solo in middle then – I’ve got a feeling … oh yeah – Paul’s rocking out with an extended close and solo! Showing he can jam with the best! Always the bassist in The Beatles, it’s great to see him him showing his prowess on lead guitar!

Maybe I’m Amazed is stunning, played to a backdrop of moving images from the back cover from his first solo album, with daughter Mary tucked in his fur-lined jacket. It’s quite an emotional moment, (*there were many) as it was taken by first wife Linda back in 1970.

For Blackbird, the now acoustic playing McCartney is raised up on a high platform in front of the stage as he tells us the background to the song. Apparently written at the time of the civil rights movement in the US, it now makes sense. He teases anyone in the crowd who has ever attempted play the song correctly (i.e. me!)

The hits just keep on coming, a mix of old, not so old and new, culminating in the highlight of the night, Live and Let Die! A piano playing Paul is left half deafened by the huge explosions and fireworks which go off front of stage. I don’t think anyone was expecting such loud bangs! It’s an epic track – it always was – and the band pull it off perfectly! 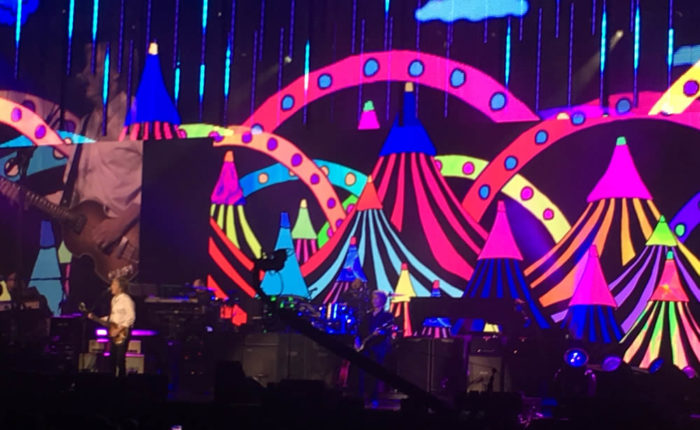 A tribute to Lennon, “Let’s hear it for John” shouts the singer before Here Today which is quickly followed by Queenie Eye, Eleanor Rigby, For The Benefit of Mr Kite and a fabulous Something with tribute photos to George Harrison flashing across the backdrop.

He closes the set with Hey Jude with half the audience holding up Na-Na placards, the other half draining their phone batteries with the camera lights twinkling around the arena. (A bit schmaltzy, but who cares? You rarely get to do this twice!).

He comes back for an encore and after another seven songs from Birthday through an appropriate Wonderful Christmas Time, Sgt Pepper and Golden Slumbers he finished with The End – the closing track from Abbey Road.

It’s a wonderful show and after 40 tracks, wham bam thanks you man, the crowd is properly sated! What an amazing homecoming!

Showing little sign of his advancing years and producing an act that would put a much younger man to shame, McCartney looked the epitome of youthful vigour. His portrait must surely be hanging in his attic because the way he pranced and jumped around this stage tonight was nothing short of a miracle. I remember my Grandad at 76 and he just sat in a chair moping!

He absolutely nailed it, his voice, not sounding overstretched or reedy and he put on an incredible show! Paul McCartney, an utter legend, keeping the Beatles’ flame alive. For how much longer we don’t know, but at 76, one must question just how many more years we will have the privilege of seeing this great man perform.

A Hard Day’s Night
Junior’s Farm
All My Loving
Letting Go
Who Cares
Got to Get You Into My Life
Come On to Me
Let Me Roll It
I’ve Got a Feeling
Let ’em In
My Valentine
Nineteen Hundred and Eighty-Five
Maybe I’m Amazed
I’ve Just Seen a Face
In Spite of All the Danger
From Me to You
Dance Tonight
Love Me Do
Blackbird
Here Today
Queenie Eye
Lady Madonna
Eleanor Rigby
Fuh You
Being for the Benefit of Mr Kite
Something
Ob-La-Di, Ob-La-Da
Band on the Run
Back in the U.S.S.R.
Let It Be
Live and Let Die
Hey Jude

All words and bottom photo by Nigel Carr©. More writing by Nigel on Louder Than War can be found in his Author’s archive. You can find Nigel on Twitter and Facebook and his own Website.

More work by Steve Hampson can be viewed on his website here and on Twitter where he tweets as @rangerpeg. Please note: Use of these images in any form without permission is not permitted.