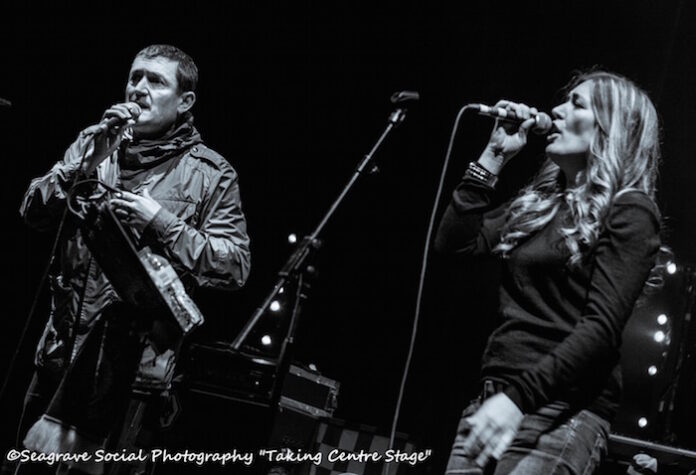 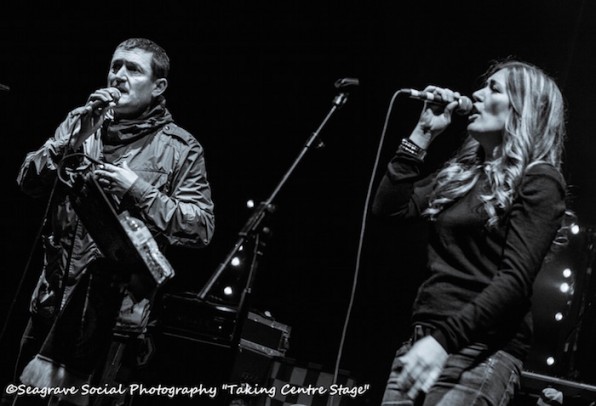 Picture of Paul Heaton and Jacqui Abbott Above, And All Others Here © Billy Seagrave

Since getting back with fellow Beautiful South vocalist Jacqui Abbott Paul Heaton has got his mojo back. With his old partner by his side he feels free to treat his audiences to a selection of treasures from a career that has stretched over the last 30 years.

Heaton has proved he is one of the finest songwriters of his generation. He’s always has a lot to say for himself and that’s what helps set him apart from many of his contemporaries. It’s the craft of songwriting beyond dealing in just rhyming clichés, the constructing of a song that can tell a story and make a point without it feeling contrived. 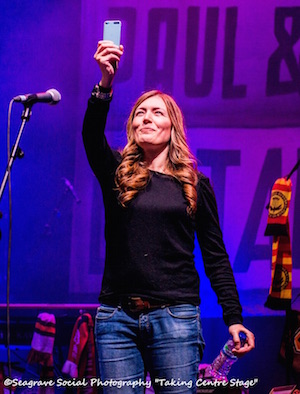 On his latest album with Jacqui Abbott, ‘What Have We Become’ there is plenty to suggest Heaton can still deploy his songs to give social commentary, witty observations and to talk candidly from the heart. Themes covered include social cohesion, national identity, our love hate relationship with booze, losing your youth and a broad swipe at Phil Collins for becoming a tax exile after topping the charts with a song about homelessness.

Jacqui’s vocals give Paul more creative options on how his lyrics are delivered as well as giving this album a broader sound, it gives him the opportunity to write from a female perspective. This record holds its own against other gems in Heaton’s back catalogue. So a gig three weeks before Christmas it Heaton’s adopted home town, in Manchester’s most charming venue (if you ignore the beer drenched sticky floor), what’s not to like?

Paul Heaton has never been shy of nailing his political colours to the mast and remains unashamedly a socialist. The giant backdrop for tonight’s gig is supplied by the GMB Trade Union and pronounces “Paul and Jacqui say Britain needs a pay rise” in Russian style type font. The graphic shows a worker holding a red flag with a football stadium, terraced housing and dark satanic mills in the distance behind. “We’ve all had low paid jobs in the past” Heaton declares as he thanks their sponsors.

The stage is also decorated with a wide variety of football club flags and scarves from clubs around the North and Midlands including Heaton’s team Sheffield United. However, the scarf that is tied to Heaton’s mic stand is that of Stockport County. Manchester’s two more ‘glamorous’ brands are conspicuous by their absence.

The footie theme continues as drummer Pete Marshall leads out the band in a Rochdale shirt. The band strike up ‘Moulding Of A Fool’ the second single from ‘What Have We Become’, it’s bright Motown style opening that is greeted like an old favourite by the crowd. 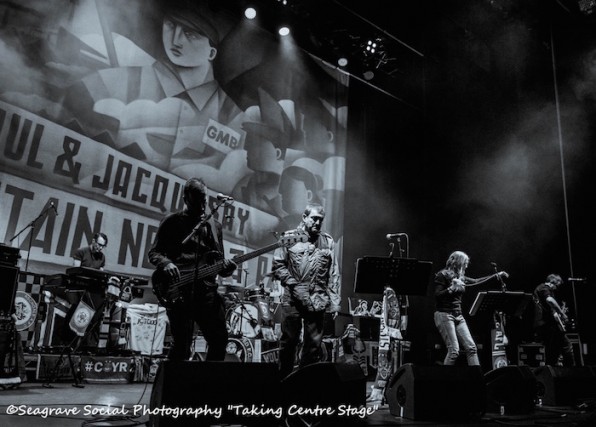 Paul walks on in a khaki bomber jacket, which he does not remove all evening; followed by Jacqui who is videoing the Apollo’s reaction to their walk on with her smart phone. She seems genuinely chuffed to be back in the limelight, spotting and waving enthusiastically at friends in the audience.

She has a gratitude to Heaton who she first met by chance when she was a teenager outside a nightclub, she sang a few lines from a song to him. She must have made an impression as when Briana Corrigan later left The Beautiful South in 1992 citing she wasn’t comfortable singing some of Heaton’s lyrics; Paul invited Jacqui to audition for the band.

Corrigan’s boots where big ones to fill but that is what Abbott did; making her debut on the band’s fourth album ‘Meow’ in 1994, she went on to sing lead vocal on some of their biggest songs including ‘Rotterdam’ and ‘Don’t Marry Her’. Seven years later she left the band to concentrate on family life. Her son Matthew had been diagnosed as autistic and she felt could no longer spend time away touring.

Her replacement in The Beautiful South, Alison Wheeler is now touring with the phoenix band The South (formerly The New Beautiful South) together with Dave Hemingway. It is no secret that The South do not have Paul’s blessing; he is none too pleased that his band mate since The Housemartins has teamed up with Wheeler to tour playing the songs he wrote with David Rotheray after he’d called time on the band.

So maybe it’s no surprise Heaton has turned to his second leading lady from The Beautiful South once again. She is after all his prodigy, he spotted and developed her considerable talent. He tells The Apollo how lucky he feels to have teamed up with her again, “I feel like the bloke who has just invented the hole punch and then in walks the lady who has just invented the ring binder”. The feeling is obviously reciprocated; both have a real spring in their steps and the chemistry is infectious.

Jacqui had not performed after leaving The Beautiful South until Paul asked her to get involved in The 8th, his project for the 2011 Manchester International Festival. She seems to be still pinching herself she is back on stage at a packed Apollo. She tells us how she got chatting to a Scottish lady would be out on the town in the hotel bar when they played Glasgow.
“What are you doing up here love?”
“I’m with a touring band”
“What type of music?”
“Have you heard of The Housemartins?”
“I ******* hate them”
“What about The Beautiful South?”
“Even worse!”
“What are you doing for them love?”
“Oh, mmm, I do the stage lighting” 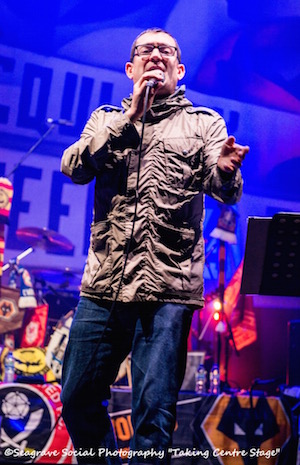 It’s not as strange as you might think that Jacqui mentions The Housemartins first when telling this toy. There are half a dozen Housemartin songs in the set, starting with ‘We’re Not Deep’.

Paul tells the tale of how The Housemartins won a Viking FM battle of the bands competition performing this song. The prize was £200 and the chance to support an international superstar at their Hull gig. The Apollo boos, laughs or jeers as Heaton reveals Gary Glitter was the top act in question. “Hindsight is a very clever thing.” Paul retorts, “He was alright in 1984…..well you know what I mean, you might of had your own suspicions but as far as we were concerned…..”

The band spent £200 on cassette tapes to flog to Gary Glitter fans but when they turned up at Hull City Hall to support ‘The Leader’ his people demanded £200 for the support slot , so they didn’t do the gig. “I’ve no regrets” laments Paul “I’ve taken a very different path to Gary Glitter since then.”

Half a dozen other Housemartins’ favourites are given an outing. The band has reworked the songs into the set seamlessly. If you were not familiar with Heaton’s back catalogue you’d be hard pressed to know which songs were recorded by which band. ‘Sheep’ is delivered with great energy and gusto, “Who bought that record” asks Paul….”You’re all liars, it only made number 56″ before suggesting the audience take a Jeremy Kyle lie detector test.

But the highlight of the evening is Paul’s powerful rendition of The Beautiful South ballad ‘Let love speak up itself’. He is so well thought of as a songwriter that his vocal ability is often overlooked. Here he shows he has lost none of his range or expression since he recorded the stunning ‘Flag Day’ back in 1985, (which is still to this day my personal favourite Paul Heaton song). Heaton completely nails the song and brings the house down before the band leaves the stage. “Don’t worry, we are only going around the corner” he quips.

Two encores follow. Jacqui has her turn to shine with ‘Rotterdam’ and then ‘Happy Hour’ gets the reception you would expect. Followed by a re-working of the duet ‘Perfect 10’ which has been rocked up or even punked up to the degree there is a cheer of recognition when Paul delivers the opening line.

The set comes to its conclusion as the band join Paul and Jacqui front of stage for The Housemartins capella classic ‘Caravan of Love’ which narrowly missed out on the Christmas number one in 1986. ‘Merry Christmas Manchester’ is Heaton’s parting gesture.

It’s been a triumph, better than you thought it could have been. I saw Paul Heaton support Madness on this very stage a couple of years back, and the difference is stark. OK it takes an exceptional support act to create an atmosphere this special but back then there was a Clash cover in the set; ‘Whiteman In Hammersmith Palais. As it happens he more than did it justice, but that’s not the point. Paul Heaton has a back catalogue that he should be celebrating and that’s what he’s done tonight.

Heaton may be the senior partner in this duo but make no mistake of the contribution that Jacqui Abbott brings. A talent in her own right, but she also brings so many more creative options moving forward on new material.

This partnership is working for everybody, Paul has his favourite leading lady back and they have a tight band behind them. Jacqui has given Paul the confidence to embrace his rich legacy and look forward with a renewed buoyancy. Despite both Paul and Jacqui’s considerable individual talents; together their sum is greater than it’s parts. Long may this partnership continue.

Paul and Jacqui are playing the Hope for Christmas benefit gig at Manchester’s Academy tomorrow, 12th Dec 2014 and have the following dates lined up for 2015:

Paul Heaton is on Facebook and he tweets as @paulheatonsolo.

Jacqui Abbott is on Facebook and she tweets as @atomic_box.