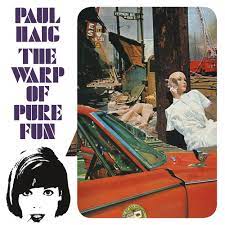 4CD boxset reissue of ex-Josef K frontman Paul Haig’s 1985 album, which was co-produced by Alan Rankine Of The Associates. The original LP comes with additional discs that feature demos, a “lost” album recorded in 1984, outtakes, remixes and rarities, plus a live concert from Japan. This represents an upgrade from the 2CD 2003 version. Ian Canty irons out the kinks…

When Paul Haig left Josef K, there was a certain amount of surprise in the music press with the direction that he took. He appeared to forsake the knotty post punk jangle of his previous band and aim squarely for a more commercial pop sound. His 1983 debut solo album Rhythm Of Life was released through Le Disques du Crepuscule/Island and didn’t quite make the breakthrough that was anticipated. It was a minor UK hit however, along with singles Heaven Sent and Never Give Up (Party Party), but even so Island’s interest quickly cooled. Undeterred Haig pressed on and put together a further set of recordings in 1984, but many of these tracks were abandoned when Island Records dropped out completely. This “lost” album makes up part of the second disc of this collection

Instead The Warp Of Pure Fun emerged on Operation Afterglow/Les Disques du Crepuscule in 1986 as Paul’s second solo long player. Alan Rankine of The Associates was in the producer’s chair for a record that was far better received that Haig’s first album and has endured the test of time. This set begins with the ten tracks that made up the LP and sets out its stall with the dramatic electro of Silent Motion and a very catchy Heaven Help You Now. There is plenty of guitar balancing out the synths here and though a few of the sonic methods bear the unmistakable “80s sound” for better or worse, it isn’t so intrusive as to hamper the material or performance. There is also the addition of some acoustic drums too, which helps to give the songs plenty of life. At times the sound achieved made me think a little of Ultravox! during John Foxx’s time with the band, which is a pretty damn stylish thing to resemble.

The graceful glide of Love Eternal is wonderfully accomplished and Sense Of Fun shapes up as a true raging synth rock monster. Scare Me is nicely edgy and downbeat and then Big Blue World follows in an amiable electrofunk/soul mode that comes complete with a catchy hook-line. This song was unsurprisingly extracted as a single and the next track The Only Truth was likewise issued as a 7 inch. The latter number was produced by New Order’s Bernard Sumner, Donald Johnson of ACR and Paul Haig himself. But even so this it fits in well with the rest of the LP and has a similar style to the previous piece, but perhaps with a little more guitar.

The stripped back sound of One Lifetime Away uses a simple keyboard riff to add atmosphere to the tune and The Warp Of Pure Fun itself ends with Love And War, a chilly but appealing piece of danceable futurism. The album represented a triumph after the problems with Paul’s debut and formed a highly effective combination of his guitar-wrangling past and the future.

There are seven bonus tracks added to this first disc and this part of the set gets underway with Haig’s rocked-up reading of Ghost Rider by Suicide and the very smart Endless Song, which tantalisingly harked back to Paul’s Josef K days. Dangerous Life takes us more towards punk funk stylings. I’m not sure who the singers who provides backing vocals here and on the album actually are, but they certainly do an excellent job.

The Executioner (Mix #1) was produced by Cabaret Voltaire, with Haig’s voice being just about heard amongst The Cabs’ manic funk cut-ups and samples. Closer Now does sound a bit dated though, but in its favour there is some excellent guitar work way down in the mix. The clattering percussion of Trust and the low-key electro with machine voices that is World Raw bring what is a very satisfying opening disc to its conclusion.

Disc two starts with twelve tracks that made up a demo recorded by Paul Haig at his home in March 1984. The sound is far more basic as a result, but that doesn’t have to be a negative. Starting with the driving electro plus samples of City Life, this tune has an austere synth sound and is as far away from Josef K as one could get. It is perky enough though and Judgement Coming, a vocal tune in a synthpop mode, is convincing enough to be able stand toe to toe with say The Human League. The Only Truth features in an early form with some good guitar riffing and the less cluttered production in truth has a positive effect on the piece. Heart Of Song was originally cut by Josef K for a Peel session and retains much of its scratchy grit, which scrapes alongside the electronics.

Then we go back to synth sounds for Crawling, but there is always the feeling that with having got the first album out of his system, Haig seems far more comfortable in his muse, ably balancing his past and future. One Lifetime Away is pared back further and it works in its favour and though these recordings have a lack of “big studio” polish, they certainly hit the mark with energy and imagination. Shining Hour glitters with low key electronics and guitar funk shapes and this section ends with the quite beautiful All Our Love, which will be a boon to any Josef K/Postcard Records fan.

The second section on this disc comprises of six tracks recorded for a project second LP on Island. These were subsequently abandoned as the Island deal fell by the wayside. Love Eternal, which made it on to The Warp Of Pure Fun, sets things going with a real joy to it. The material here is drawn from songs cut on the previously demo in March 1984 and the stomping pure pop of Shining Hour works reasonably well, though it has a few dated noises that probably seemed cutting edge at the time. Fear Of Dancing’s paranoid punk funk feels still a work in progress, but Love And War finishes this section of the set on a high with some sweeping dance moves.

We then come across disc three, which mops up various rarities, remixes and oddments. The 12 inch cut of Heaven Help You Now leads the charge and here it is very effectively lengthened for the dancefloor. This is followed by further 12″ versions of This Dying Flame, furnished a near-metal guitar break and The Only Truth. The latter of which also features in both US mix and instrumental forms on this disc and works really well on these alternate takes. The Executioner is here as Mixes #2 and 3# and both provide a good jolt of electropunk menace.

There are a couple of interesting rarities towards the middle of this disc. The utterly charming instrumental Scottish Christmas, one side of a 1985 seasonal joint single with Durutti Column, is an ace and Haig also has a go at the theme from The Persuaders tv series. He applies the correct amount of intrigue to this tune, as well as bringing it up to date. Change Of Heart, dating from 1983, was one of a few here that “slipped through the net” and it wouldn’t have seemed that out of place on Rhythm Of Life.

Dating from around three years later Work The System is also very synth-based and if the Mantronik mix of Heaven Helps You Now shows its age a bit, it is still a neat enough acid house/hip hop influenced sound. This section of The Warp Of Pure Fun ends with a very cool On This Night Of Decision, which originally appeared on the b side of the Justice single in 1983.

The final disc of The Warp Of Pure Fun yields a nine song live set taped in Japan on 4th May 1984 complete with a mid-gig interview, plus six more demos. Paul Haig candidly admits in the sleeve notes that playing live was never a particularly comfortable experience for him. However, after a spoken introduction Haig and a band of Rankine, Mike McCann and James Lock breeze into an excellent version of Scare Me. Though stage announcements tend to be a terse “thank you” or brief song intro, there is short interview section halfway through the set. This is understandably conducted through a translator. Here Paul says he doesn’t really do concerts in the UK and says just “mucks around” there. He generally comes over as an engaging and self-deprecating presence.

The sound quality is very good throughout the set and for the material for the most part comes from what was at the time the forthcoming LP The Warp Of Pure Fun LP. Only a neat take of Blue For You and Heaven Sent are drawn from The Rhythm Of Life collection. Haig covers Ghost Rider by Suicide well again and does a version of Magdalena 82 from frontman Alan Vega’s 1981 album Collision Drive too. It’s a finely paced and convincing set which is well worth one’s time. The songs thrive and can breathe in the live setting with less instrumentation, particularly Big Blue World, Heaven Sent which bounces along merrily with a bass like on a PIL record and Love Eternal.

Finally with have a selection of demos from the mid-1980s. The light jangle pop of Testimony and the more workmanlike Wrapped date from 1986, demos for a possible EMI deal that never came to fruition. The last four tracks made up a 1986 session, with Eastworld, a pretty electronica piece and In-Flight Entertainment later being re-recorded for 1991’s Cinematique LP. Reach The Top was later sung by Haig’s friend Billy Mackenzie, but features here in an instrumental form. Bridges’ tremolo sound and drum flourishes finish off the set with a profound sense of mystery.

This collection is housed in an elegantly designed box with a detailed booklet including revealing comments from Paul himself about the album and it songs, the 1984 demo and the Lost LP. Also there is a relevant interview extract from producer Alan Rankine. This all helps to give a real feel of depth to what is a quality piece of work all round. The Warp Of Pure Fun represented a turning point for Paul Haig after major label hassles, where he found himself again and seemed reenergised and focused. The audio quality is great and tunes and performances really burn. This reissue rounds up everything a Paul Haig fan could wish for, bar a live appearance (one can hope). The Warp Of Pure Fun 4CD is an excellent and thoroughly compiled set by a label that clearly loves Paul Haig’s sterling work and treats it here with total respect.