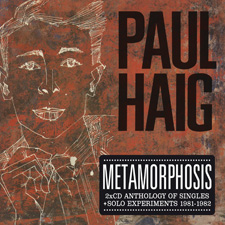 Compilation of the single tracks, rare recordings and live performances by Paul Haig in a variety of guises after his split with Josef K, taking in the start of his solo career and his dalliance with the Rhythm Of Life outfit…..LTW’s Ian Canty looks at what came next for Postcard’s coolest blade…..

I think it took me all of about 15 seconds to become a fan of Josef K and in turn their leader Paul Haig. It was the frantic intro to “Fun N Frenzy” that did it for me, from the LP that everyone else seemed to hate but I loved “The Only Fun In Town”. Therefore I was somewhat dismayed to read soon after that the band were no more so soon after I had discovered them (in fact I think the general dissatisfaction with the LP may have played a part in that). Malcolm Ross soon joined fellow Postcard travellers Orange Juice and the others hooked up with Nick Curie in the Happy Family, but Haig struck out on a solo career that seemed determined to get away from the scratchy, literate Punk of the K and into something more concerned with the advancing technology of the early 80s. This 2CD comp documents that early period and aurally dots around all over the place, which is part of its charm and also an accurate portrayal of the restless artist at work that was Paul Haig in the two year period featured here. “Metamorphosis” is a very apt title of course, at once tying the whole thing back to the Kafka roots of the Josef K name, but also meaning the radical change from Velvets influenced guitar mayhem to a more synthetic and less combustible sound.

The first track here “Chance” is exactly how the 15 year old me would have hoped he would have advanced on hearing that he had decided to explore synthesised sound. The perfect electro-update from Josef K still with that nagging rhythm guitar and added angst that made them so entrancing. It wasn’t all going to be that way, I may have thought “unfortunately so” at the time but now I can see the need for a wider scope. His cover of Sly Stone’s “Running Away” showed his eye for the pop charts and he could count himself unlucky for missing out – difficult though it maybe to equal the Family Stone’s original, it is also pretty hard to completely ruin such ingrained beauty and Haig’s version is nice enough. A lovely summertime piece of pop.

Though obviously not having Billy Mackenzie’s amazing voice Haig’s work in the electronic field of the time does share a similar spirit of adventure to the Associates work – playful, and decidedly human, set against the Numanoid-type robot posturing of a few years previously (which is not to slag off Gary Numan himself as “Cars” was and always will be a wonderful record). Despite the largely synth backing, Haig still on occasion evoked his long-standing influences from his Josef K days, i.e. Television (“On This Night Of Decision”) and the Talking Heads (on “Luck”). “Christiania II” is chaste, rather courtly but beautiful too and bearing in mind the duff “Swing” craze of about 10 years or so ago it is a bit of surprise to see that Paul Haig was there quarter of a century before with substantially more inspiration than the Sinatra wannabes (we shouldn’t forget the great Vic Godard was also doing this kind of stuff around that time)! “The Song Is You” has a natural bounce and energy that negates any qualms about the stylised bobby-soxers vibe of 21st Century Swing. The five songs from his “Swing” EP are a bit of a jolt but fun and you have to admire the scattershot approach of a kid in a candy shop that Paul showed after forsaking the Indie Rock straight jacket. The first disc ends nicely with the spy theme/dancefloor killer “Mad Horses II”.

Moving onto the second disc, I must confess the Rhythm Of Life tracks were a real point of interest here that intrigued me from the off – I hadn’t heard them prior to this and although I’ve really enjoyed Paul’s solo work it was interesting to see him in a kind of “group” situation once more so soon after the split. The first two singles sides that begin disc two are of a lighter construction than Josef K, sharing the kind of bright Pop Funk sound of the Jazzateers (“Summertime” hints at the pre-Goth Cure too) but the follow up “Uncle Sam” is much more uptight and direct, though the guitars are pared down in comparison with his recent past they still hit home.

The first take of “Mad Horses” acts as a bridge between these more pop tracks and the very experimental recordings taped on a C30 called “Drama” by Haig with electronics and samples in 1981. This struck me as perhaps a similar situation as when Pete Shelley worked with an oscillator in 1976 and with the Tiller Boys later one in tandem to his work with Buzzcocks, with someone who was mostly identified in a rock context looking at an area of sound far away from the traditional. When you consider that around the time this cassette emerged Haig was viewed as trying to push on with a seemingly commercial Pop career, these often discordant selections are a bit of a shock. “Drone” is as close as it gets to his officially released recordings of the time, a low-fi version really, but the rest lead by the three part “Drama” are much more conceptual. This all goes to prove what a prolific character he was over this period and how willing he was to explore different areas. The set ends with four live tracks recording in 1982 with his touring band of the time, which are heavily synthesised with a lot of slap bass too but are engagingly low-key and fun.

Though by necessity this is a grab-bag of wildly different noises, it does add up to a fascinating portrait of an artist trying to develop anew away from the Postcard scene he was intricately linked with, to show that his creativity was not really limited to a one note approach. Though not everything quite came off, all of it was interesting enough and the broad spectrum displayed only serves to enhance the enigmatic charm of the talented Mr Haig. A thorough and thoroughly intriguing compilation.