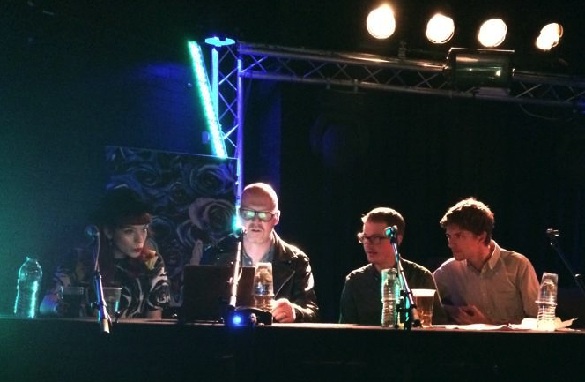 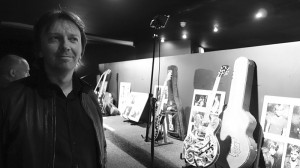 Saturday’s Mansun convention saw 500 fans descend on Chester to  celebrate the legacy of their favourite band. The sold out event  culminated in what Mansunites have waited over a decade for – the  first playback of a Paul Draper solo song. That song is “Feeling My Heart Run Slow”. Our man on the ground, Martin Leay, reports.

There can’t be many bands that inspired the level of devotion to justify a convention eleven years after splitting up. Mansun were exactly that kind of band.

Saturday’s event in the band’s hometown of Chester was a monumental success. The Mansun-packed day included a “Wide Open Mic”, panel discussions focusing on all aspects of the band’s career and a charity auction that raised £2,000 for CLIC Sargent.

Tribute acts and DJs kept the party in full swing until the early hours and a fantastic time was had by all. Fans were delighted when former Mansun frontman, Paul Draper, turned up to support the event. All credit to Andy Lyth and his team of organisers who worked so hard to make it such a fantastic occasion.

The convention came after a roller-coaster year in which Paul Draper has gone from never wanting to hear his voice on record again to agreeing to make one of his songs available for fans to hear at Saturday’s event, with the intention of now releasing his solo album. I had the great pleasure of introducing “Feeling My Heart Run Slow” on Saturday night, which was filmed and shared by Richard Murray of the Paul-Draper.net fansite and can be heard below:

Mansun fans have waited eleven long years for this. Everyone who was there on Saturday and many more who have listened online since agree that it was absolutely worth the wait; every second, minute and hour.

It has everything you could possibly hope for from a Paul Draper song. It combines the fuck-off rock vibe he first described to me last year (interview here) with the more electronic feel of some of Mansun’s other material. The song has developed dramatically since the rough demo Paul first recorded in America over ten years ago.  It started out as a rock track provisionally titled “Cracks In My Ceiling” but morphed into a rock-electronic hybrid all because Draper picked up a new Prophet 12; his favourite type of synth.

The beats and bleeps evoke comparison to the Perfecto Remix of “Wide Open Space”, yet it sounds totally fresh and of the moment – the kind of smash hit that Calvin Harris and Rihanna would kill to have at their disposal. To my mind, the guitar solo at the end is as good as any Mansun committed to tape.

The lyrics provide a revealing insight into Paul’s frame of mind after Mansun’s demise, when disillusionment with the music industry and his time in the band ultimately led him to scrap his solo record. This is essentially a song about being at the lowest point possible but clawing your way back from the brink. The theme of “Spooky Action At A Distance” is explored – the central strand of the record – Draper struggling to make sense of, and move on from, past events in Mansun.

The euphoric backing track is matched by an incredible vocal which shows that Paul Draper’s voice has not lost any of its impact. That unmistakable falsetto lifts each brooding, pulsating verse into one of the best choruses I have heard in years. 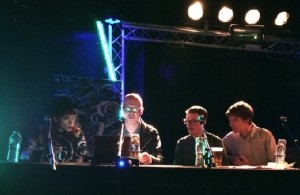 It was a great honour to share the stage on Saturday with journalist Paul Lester (who toured Japan with Mansun), Matt Davey (who compiled “Kleptomania” and “Legacy: The Best of Mansun” while at EMI) and Catherine Anne Davies (who is ‘The Anchoress’ – the figurehead of Paul’s other project).  Together we formed “The Legacy of Mansun” panel.

“Feeling My Heart Run Slow” was written, arranged, produced and mixed by Paul Draper. Jon Barnett and Stax from The Anchoress made up the rhythm section with all other instruments played by Draper.

Paul recorded a couple of tracks for the convention in case one didn’t work out.  He liked them both, so recorded three more.  This means he is already half way through recording “Spooky Action”.

It is remarkable to think that the solo album we had almost given up hope of ever hearing is now going to be released. None of this would have been possible without the fan-led petition for Paul Draper to release his long-lost solo album.

Paul doesn’t know how long it will take to finish “Spooky Action” or what format it will come out in. Independent labels expressed interest before hearing a single note and surely the bootleg video circulating cyber space will have caught the attention of others.

Alternatively, Draper told me when I caught up with him in his London studio before the convention, that he might record the album on a single acetate and invite people to bid on it – with all contributors then getting a digital copy of the album. This is how “Caustic Window”, the unreleased Aphex Twin album came out earlier this year.

Other options include setting up a Kickstarter project or simply putting it out himself; either by resurrecting the Sci-Fi Hi Fi label that released the first ever Mansun single, or simply selling it directly to fans online like My Bloody Valentine with “MBV”.

There are many ways in which we could get to hear “Spooky Action”.  The crucial thing is that we will get to hear it. “Feeling My Heart Run Slow” is outstanding and bodes extremely well for the album. This song will appeal to Mansun fans but is relevant and vital enough to attract a whole new generation of fans – including those who are into bands such as Pulled Apart By Horses, Blood Orange and Menace Beach who have all declared their love of Mansun.

It is great that Paul Draper is back with The Anchoress and in his own right. All of this and Saturday’s convention goes to show that the legacy of Mansun is very much alive. However “Spooky Action” is released, let’s hope we won’t have to wait another eleven years to hear it.

All words by Martin Leay. More work by Martin on Louder Than War can be found here.