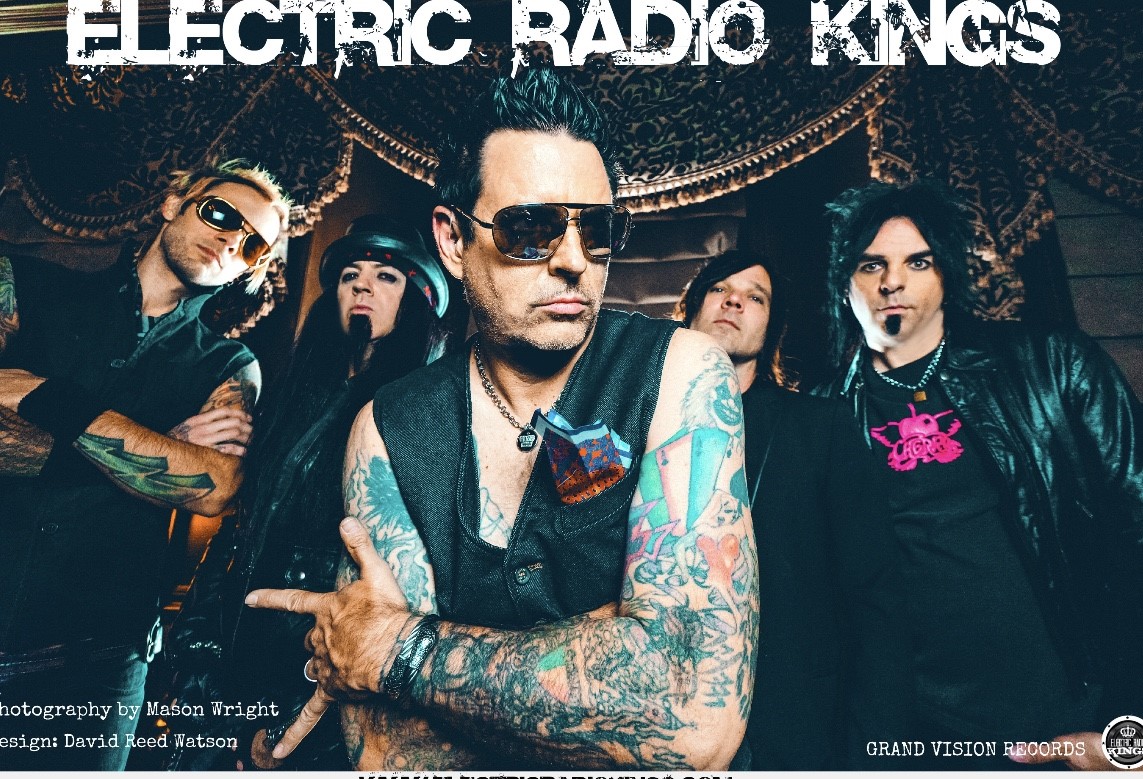 For those who depend upon rock for their ultimate survival, cast your senses upon the “Electric Radio Kings.” Spawned from the likes of the iconic Jim Morrison and The Doors, Stone Temple Pilots, Aerosmith, Guns n Roses, and Cheap Trick, “Electric Radio Kings” have a vibrant, effervescence presence, and a decadent rock ‘n’ roll sound, that deserves a genre of its own. “Orgasmic Rock” seems to best fit lead vocalist Paul Christiana and “Electric Radio Kings” who have already charted on Billboard’s Top 40, coming in at #35, with their hit “Back to Back”, a remake of the Amy Whinehouse hit, and that’s only the beginning. 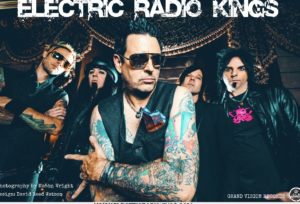 Set to release their new album, “Purrr”, on April 28th via Grand Vision Records, the new album is inundated with hard driving, explosive “singles” as opposed to track fillers. What ensures this band’s success and divides them from the norm is their ability to write catchy message minded, radio ready songs with a dazzling and edgy alternative and diverse mix of rock n’ roll.

Bringing back the exciting era of The Doors, The Rolling Stones, and Billy Idol, with a hint of Stray Cats, the Las Vegas based faction manages to remain modern, relevant, and super authentic. The band features: Paul Christiana, the vocalist who writes his heart out, yet can cover Jim Morrison, no problem. National song writer and recording artist Stacey David Blades is showcased on lead guitar. Keith Horne also plays lead and rhythm guitar, while former A&M recording artist Johnny Rude plays the drums. Finally former member of “Sex Slaves”, Del Cheetah is featured on bass.

The band has already gained endorsements from icons such as Alice Cooper who featured them on his worldwide, syndicated radio show, “Nights With Alice Cooper.” He described their song “Sympathy For Me” as “a fun no frills, back to bar, rock n’ roll song.” During his segment “Deja New”, Alice stated, “The Kings are the real deal with their no frills, in your face, back to basic blues with a 90’sish feel.”

I spoke with Paul, who was a complete blast, musically sensitive, and honestly candid, regarding the “Electric Radio Kings”, their music and soulful inspirations….

Louder Than War: What actually inspired you to form “Electric Radio Kings?”

My wife and I talked about my longevity and physicality of playing, going out and actually playing and trying to be in a band. I told her to give me until December, and that was in 2017. I went and recorded with Stacey on our own terms. I wrote some songs and sent them to Stacey and he thought they were cool as hell, and then he put his guitars on it. That’s how we write. I play guitar so I write the music on guitar. I basically send it to him and he arranges it and puts in some guitar parts, and then he’ll send it back to me and we will add a little drum machine to it. We did three songs and when they came back he asked me to come and do a show. I’ll never forget it was on December 7th, 2017, and I flew in and we practiced and we played the show. It was pretty packed. The rest was history. We love each other. We love our band. We actually decided we were going to keep writing and writing. So the writing is never a problem. I am a writer, it’s my strength. We don’t have a problem with writing good material and I think we’re going to follow up with some really good strong material.

Yes, you have to keep on going today.

Yeah. Everybody is telling us you have to have your singles. That’s longevity. When one dies out you have to follow up with something.

If you could have an ultimate stage fantasy, what would need to happen?

I can tell you exactly what it would be. It would be the scene that you see in Wembley in the movie Bohemian Rhapsody, which I actually saw the original in 1985 when they did Live Aid. You open up that curtain and walk out to 100,000 people all knowing every word of your songs. That’s my ultimate stage fantasy.

That’s a good one.

It’s not the fame that I seek. It’s the love of the music that I seek. I love to see people love what we do. You know what, fame doesn’t make the soul of who you are. The musician never changes.

If you could have me ask any question in the world, what would you want me to ask you?

Why do I write music?

Ok, why do you write music?

I write music because I like to interact with people and give them a vision and an outlet for something they can relate to. Also, to express myself because in some form there is something inside of me that believes that you can create and be creative and also be honest at the same time. That’s why I write music.

What inspires you to write music, especially one song after the other?

My wife inspires me. She’s phenomenal. Everybody loves Lee Ann. I think she’s a big part of the love songs. Then one other thing that inspires me is musicians who basically I channel through. I listen to them and then gain their inflections and their soul that comes out in my music. So that inspires me a lot. Humble Pie, Rod Stewart when he was with Jeff Beck, Bad Company, Led Zeppelin, The Stones, The O’Jays, Jackie Wilson, James Brown, Barry White, Randy Rhoads, I take pieces from all of it. John Waite, I love the Baby’s, I loved John Waite. We do “Head First” live. A huge inspiration for me and one of the biggest influences for my singing is Jim Morrison. I’m a huge Jim Morrison fan. I think what Jim Morrison taught me was don’t be inhibited on stage. Say what you mean and mean what you say. Kick ass and don’t worry about what people think. Don’t offend anybody if you don’t need to. Just say what you mean. When you go up there if there is something on your mind, say it. That’s your moment, that’s your microphone, that’s your time. Say it. I’m not political on stage. I don’t need to talk about the negative. I’m more of a positive person. I don’t want to hurt or offend anybody. Getting up on stage and saying things to offend somebody is not something you’re going to see out of me. Will I speak the truth? Yes. I might say something that somebody might not like hearing but I’m not going to use that podium and take away from the focus of what people came there to do, which is hear good rock ‘n’ roll music….and have a great time doing it.

I can’t wait to see you in person on stage.

You can tell it’s my play-land.

Yes I can, a million percent. You love music so much. Do you feel that music can change the world?

I definitely do and I think it’s affected people. For instance, Michael Jackson, I think that he solely as an artist took music to portions of the world that never had it. That I know for a fact because he had such a listenership in countries that people really probably smuggled music in to find out who he was. I do think music can change the world. What people have to have as an open mind and an open soul to allow it. Sometimes I think government and politics stay in the way of actually allowing music to be a part of people’s lives. Take for instance North Korea or China, they don’t allow certain aspects of YouTube. YouTube is the largest music platform on earth. It’s what everybody goes to when they want to see a band. It’s the best service to get your music out there. Some countries don’t allow you to. They have their own version but it’s watered down. I am not a big fan of censorship because how can somebody really be creative as a musician if they have to be censored? Within reason, I mean I don’t want to talk about killing someone. But if somebody is living in a country and that’s what’s happening in their country for example if they were a reggae band and they’re singing about something that happened in their country, that’s different. But condoning something that brings harm to others is not something that I believe makes the world a better place. Musically that’s something we try to never do. Most musicians are kindhearted people. They don’t breed hate. The ones that do we don’t seem to gravitate towards. For me if somebody came and asked me to sing about slaughter for $1 million I would tell him to save the million dollars and put it into something a lot more creative and positive towards people. It’s wrong to take money from something that’s totally wrong. I can’t do it. I wouldn’t take money from something that would harm people.

You have to be able to live with yourself.

I was just thinking that, you have to wake up every day. I can’t imagine making millions of people upset. If you can’t say something nice don’t say it……I forgot to tell you another artist that inspires me… Tom Jones. I love him.

The Tom Jones? I wouldn’t have pinned you as a Tom Jones person.

That’s what makes it so crazy. His singing, “Delilah”, “Green, Green Grass of Home”…Tom Jones was a bad-ass singer in the day. I mean he still can sing at 80.

Billy Idol…I love singing Billy Idol. That’s kind of influential in my singing. Actually that voice…. I go to vocal lessons. I have an excellent vocal teacher. I’m a baritone singer. My favorite singers are baritone singers, like Van Morrison. I love music and I’m not stuck in one genre, thank god.