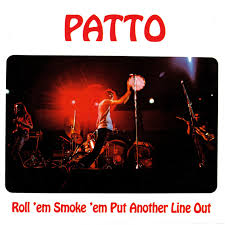 Cherry Red via their Progressive imprint pursue their reissue of Patto’s back catalogue. Louder Than War’s Craig Chaligne reviews.

For an excellent account of the first two reissues of Patto’s four LP’s please read Ian Canty’s excellent review of the reissues of their self titled debut and its follow-up “Hold Your Fire”. This second batch sees the quintet on a slightly declining mood, after all the love and care that had been put into “Hold Your Fire” for little success commercially, the band went for a more spontaneous and zany approach on “Roll ’em Smoke ’em Put Another Line Out”, a decision probably enhanced by a slight lack of completed songs when they entered the studio. “Flat Footed Woman” with its solid rhythmic backbone showcases Ollie Halsall’s piano skills extensively. “Singing The Blues On Red”  starts with a groove slightly reminiscent of James Brown but closes off with a typically left-field Patto outro. The band’s Python-esque side surfaces on the accapella “Mummy” while Halsall’s guitar pyrotechnics are at the fore on “Loud Green Song”.”Turn Turtle” belies it title and turns out be surprisingly melodic with some excellent piano work again and gorgeous harmonies. The sleazy groove of “I Got Rhythm” could have been underwhelming from a less technically proficient band but Patto makes it work. There is another comic track with “Cap’N ‘P’ And The Atto’s (Sea Biscuits Part 1 & 2)” sung by Halsey which turns out to be part folk tune and sea shanty with a spoken intro. The album closes off on a more conventional note with a slightly glam-rockish stomper (“General Custer”). Alternate versions of “Flat Footed Woman” and “Singing The Blues On Reds” are added as bonus tracks. 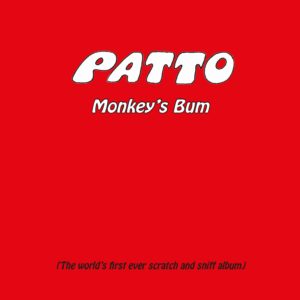 By the time Patto started recording “Monkey’s Bum”, singer Mike Patto had started penning his own songs opting to take the band into a more commercial direction (a move that was backed by John Halsey). However Ollie Halsall wasn’t keen on Patto’s material and left the band halfway through the recording sessions. With an album to complete, the band drafted in saxophonist Mel Collins to fill in the gaps left by Halsall’s departure on the songs. Island deemed that Patto without Halsall wasn’t a great idea and decided against releasing the LP, a crying shame as “Monkey’s Bum” is a great record that turns out be the band’s most accessible piece of work. “My Days Are Numbered” uses its musical contrasts very well with ultra melodic verses featuring masterful arpeggios by Halsall and some cool bass lines courtesy of Clive Griffiths. They tackle a Randy Newman composition with gusto (“Last Night I Had A Dream”) and the brass heavy “Sugar Cube 1967” penned by Mike Patto grooves along nicely. Ollie Halsall’s “I Need You” harkens back to the Patto of old with impressive keyboard and guitar solos by its composer. “Good Friend” drags along a little but the boogie of “Get Up And Dig It” is most effective with the added pleasure of Mel Collins’s sax thrown in the mix. Halsall proves a more than able vocalist on the ferocious “Sausages” while the goofy “Hedyob” ends up with another superlative Halsall solo. “Pick Up The Phone” has a slightly Kinksian feel (think “Face To Face- Something Else” era) while the band choose to have another go a “General Custer” to close the LP. Three tracks from a 1973 Peel session are included as bonuses.

More info on Patto can be found on this excellent fansite: www.pattofan.com