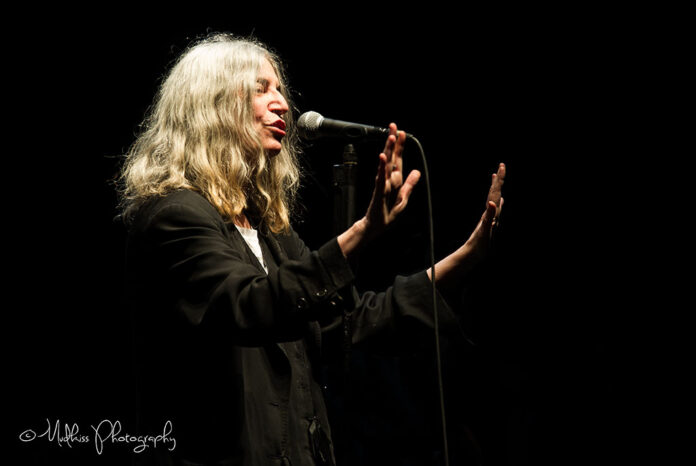 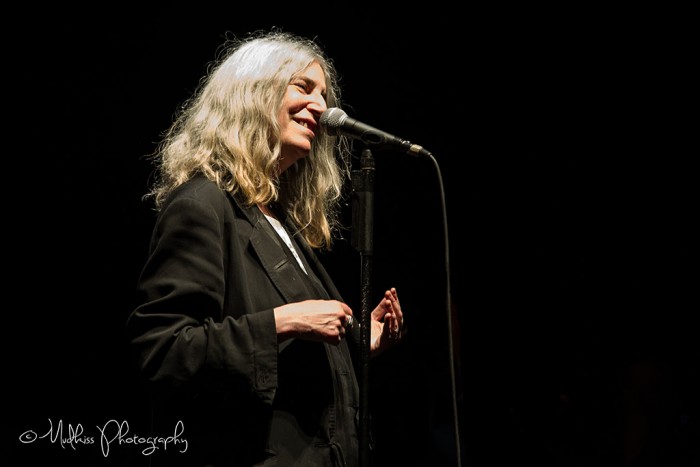 Photo of Patti above © Melanie Smith, see a full gallery of Patti Smith photos from the Manchester  show here.

As Patti Smith’s ‘Horses’ tour hits Glasgow, Gus Ironside finds out if the visionary rock ‘n’ roll poet still has the power to take an audience to another level.

And so, to Glasgow. Louder Than War readers will already know the script for this tour, having read Nathan McIllroy’s review of Patti Smith’s triumphant Manchester gig on Monday night. Arriving in Glasgow just as summer made its first appearance, the first part of the show rendered Smith’s deathless 1975 debut album, ‘Horses’, in its entirety. Tony Shanahan had been handed the onerous task of filling in for the late Richard Sohl on piano, a role which he performed with aplomb. Tom Verlaine’s keening lead guitar part on ‘Break It Up’ similarly proved no hurdle to Jack Petruzzelli, and original Patti Smith Group members Lenny Kaye and Jay Dee Daugherty displayed all the fluid creativity that has been the group’s hallmark since its inception.

Smith’s voice was astonishing. Rich and powerful, even stronger than it was in her most celebrated years. Lenny Kaye, the man who single-handedly defined the garage rock genre with his ground-breaking 1972 compilation ‘Nuggets: Original Artyfacts from the First Psychedelic Era 1965-1968’, was similarly impressive, cascading guitar lines that were as much influenced by free jazz as British Invasion rock ‘n’ roll.

‘Free Money’ has always been a spiritual, and so it was tonight, many of those dancing to its euphoric surge surely empathising with its theme of freedom from economic shackles. ‘Land’ was even more intense and transporting than it is on record, but ‘Elegie’ was the emotional heart of the evening, as Patti listed some of those who have left us too soon – Johnny, Joey, Dee Dee, Johnny Thunders (huge cheer), Mapplethorpe, her brother Todd and the original rock ‘n’ roll poet, Lou Reed (another massive cheer).

A litany of People Who Died; that could almost have been a cue for a Jim Carroll cover, but instead Smith invited us to think of our personal lost loved ones as the band unfurled the concluding track from ‘Horses’.

The second half of the set was a looser, more celebratory affair; ‘We Three’ was one of the highlights of the entire show, Patti’s finest vocal of the night. Lenny then introduced a medley by the ‘Greatest New York band of them all’, pitching straight into a funky cover of the Velvets’ ‘Rock ‘n’ Roll’ and digging deep into the choppy rhythms of Sterling Morrison’s guitar style. Segueing seamlessly into ‘Waiting for the Man’ and ‘White Light/White Heat’, the guitarists took turns at lead vocals as Patti took a back seat, temporarily.

‘Dancing Barefoot’, a song which had a profound influence on Kurt Cobain and Polly Harvey, was warmly received by the enraptured audience. While the Glasgow crowd had to be coaxed a little to wave their hands to ‘Because the Night’ and ‘People Have the Power’, the beauty and sincerity of the songs’ lyrics hit home all around the concert hall.

Returning for a well-deserved encore, the band delivered a pounding ‘Beneath the Southern Cross’, once more channelling the Velvets as they transformed the song into a Cale-dark relative of ‘Black Angel’s Death Song’. Announcing “an English folk song’, Patti and her monochrome-attired band then tore into a reckless, punk take on The Who’s ‘My Generation’.

‘I love your hair!’, a voice cried out, drawing a bemused ‘My hair? You can have it!’ from Smith. There were many grey hairs on stage and in the audience tonight, yet right in front of the stage most of the dancers were young women, eyes wide, smiling and laughing in recognition of what they were witnessing and what Patti represents to them. In an age when mainstream female artists embrace and proselytise the gospel of self-commodification, and new technology drives a deeper, darker strain of misogyny, it was a joy to see the baton being passed to a new generation prepared to kick against the pricks.

On the stage tonight, Patti was Sister Rosetta, Simone de Beauvoir, Kim Gordon, Kathleen Hanna. As she wrenched the strings from her Fender Stratocaster in the white noise, auto-destruction denouement of My Generation’, the sheer joy and abandon of Smith’s warrior-poet performance left us defenceless.

Patti held aloft the mangled holy relic, echoing the words of the sensational Alex Harvey as she declaimed “Behold, the only fucking weapon we need!” Squint a little and you could make out the singer’s late husband Fred Sonic Smith, the MC5 guitarist who led the charge in Brother John Sinclair’s guitar army, standing by her side once more.

Smith’s pivotal role in the development of rock ‘n’ roll in the 70s places her alongside those other great survivors, Bob Dylan, Neil Young and Iggy Pop.  If Iggy’s work represents a carnal liberation, visceral evidence that the soul resides in the body, then Patti’s oeuvre extends this philosophy into carnal spirituality. It’s all about intent with Patti, co-opting and re-aligning religious belief systems not for iconoclastic shock value, but as a means of expression, enriching our understanding of ourselves and our relationship to our fellow precarious souls, clinging uncertainly to the Raft of the Medusa.

Tonight, Patti Smith didn’t fuck much with the past, but she fucked plenty with our future. Patti held infinity in the palm of her hand and offered it, gently, to us all.

“I must create a system, or be enslaved by another man’s. I will not reason and compare: my business is to create.” William Blake.

For a full photo gallery by Melanie Smith go here.

All words by Gus Ironside. More writing by Gus at Louder Than War can be found at his author’s archive.