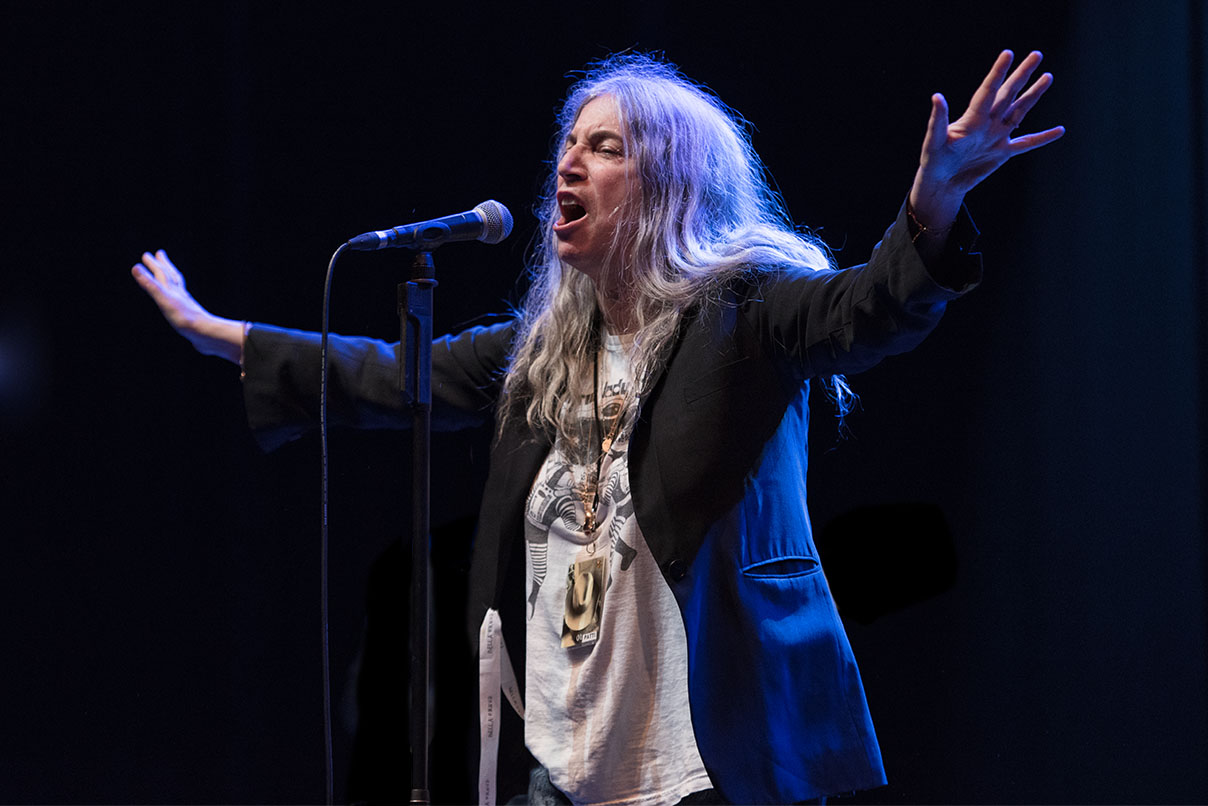 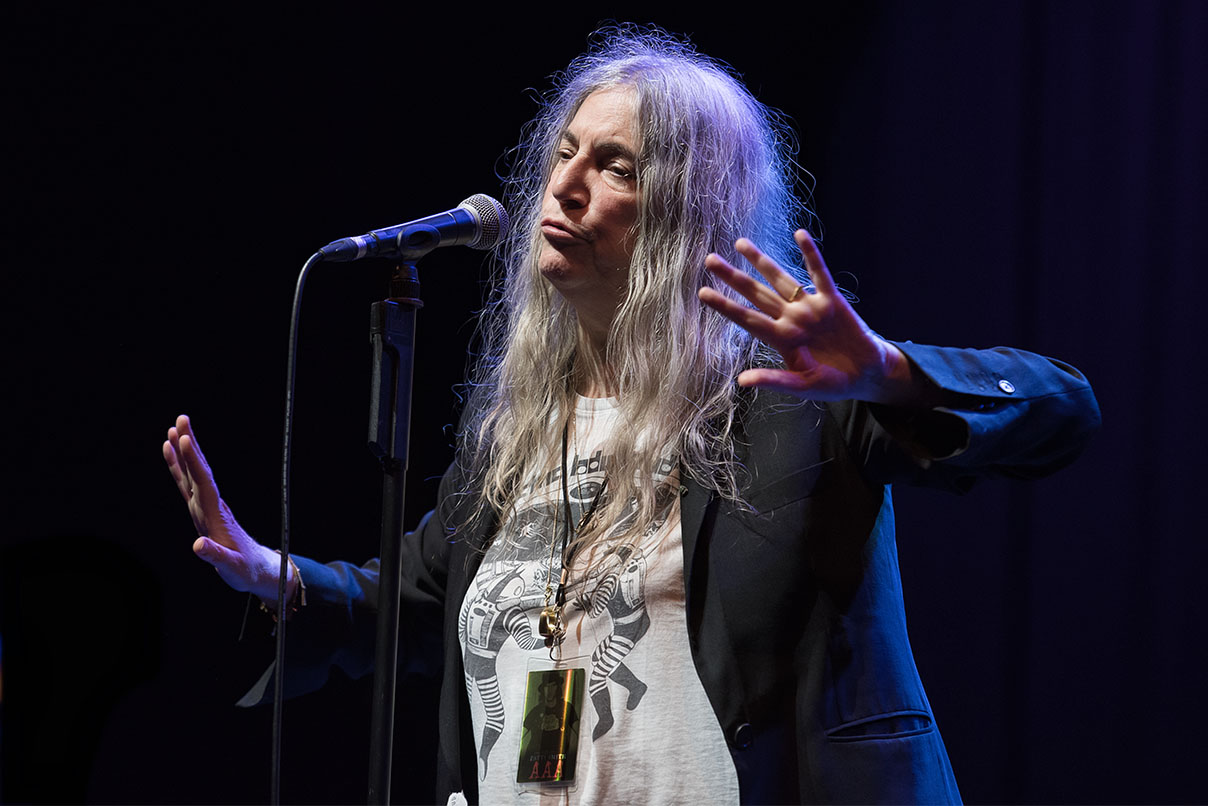 Louder Than War photographer Melanie Smith captures the legendary, enigmatic Patti Smith and her band at O2 Apollo, Manchester as part of her European tour.

Two huge rock n roll performances took place in Manchester this evening, with the Rolling Stones over at Old Trafford and influential American punk poet Patti Smith at the Apollo. For me it was a no brainer that I chose to photograph one of my all time favourite artists Patti Smith, who still managed to pack out the theatre despite the classic rock band being in town. 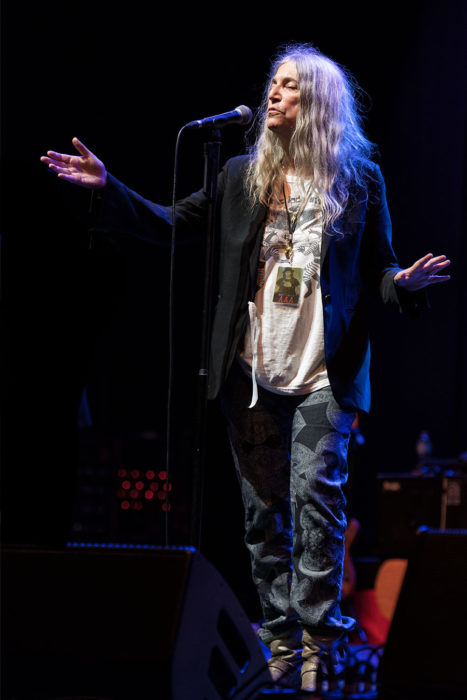 Arriving on stage a few minutes late she apologies to her attentive audience for keeping them waiting, it seems she was devouring an Indian meal, then looking for her toothbrush. The band, who comprise of original band members guitarist Lenny Kay, Jay Daugherty, Tony Shanahan and even Smith’s son Jackson Smith, start up Redondo Beach and she is full swing, it’s obvious Patti is loving playing the Apollo. In fact this is the 3rd time I have witnessed Patti’s show at this venue and she always has the crowd in the palm of her hands, she never fails to stir the emotions and has an air of cool as fuck about her.

Patti informs us that the Rolling Stones are playing tonight and she’s not too bothered as she saw them back in the 60’s, but tonight she is going to attempt to do a Stones song in tribute, she brings out her lyrics sheets, puts on her glasses and thunders into Paint It Black. Quite a few fluffed lines follow, but she is forgiven and she isn’t phased at all, in fact its all part of her charm, she is laughing and communication with the crowd, totally immersed in the experience.

As my photo contract states two songs only in the pit this was my time to exit.
Patti you are a true legend and an inspiration to all women everywhere. 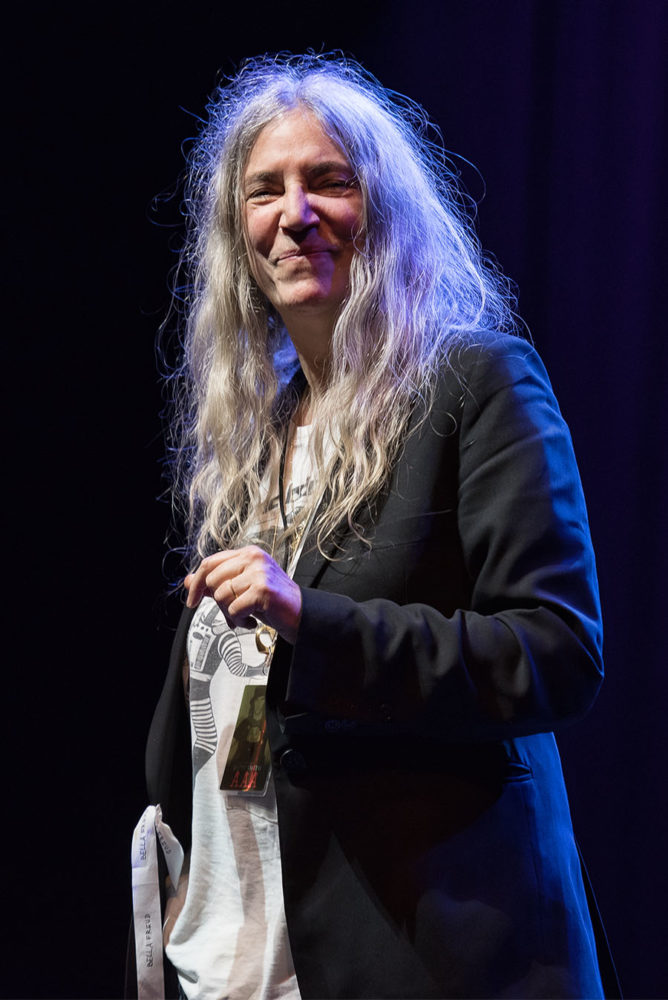 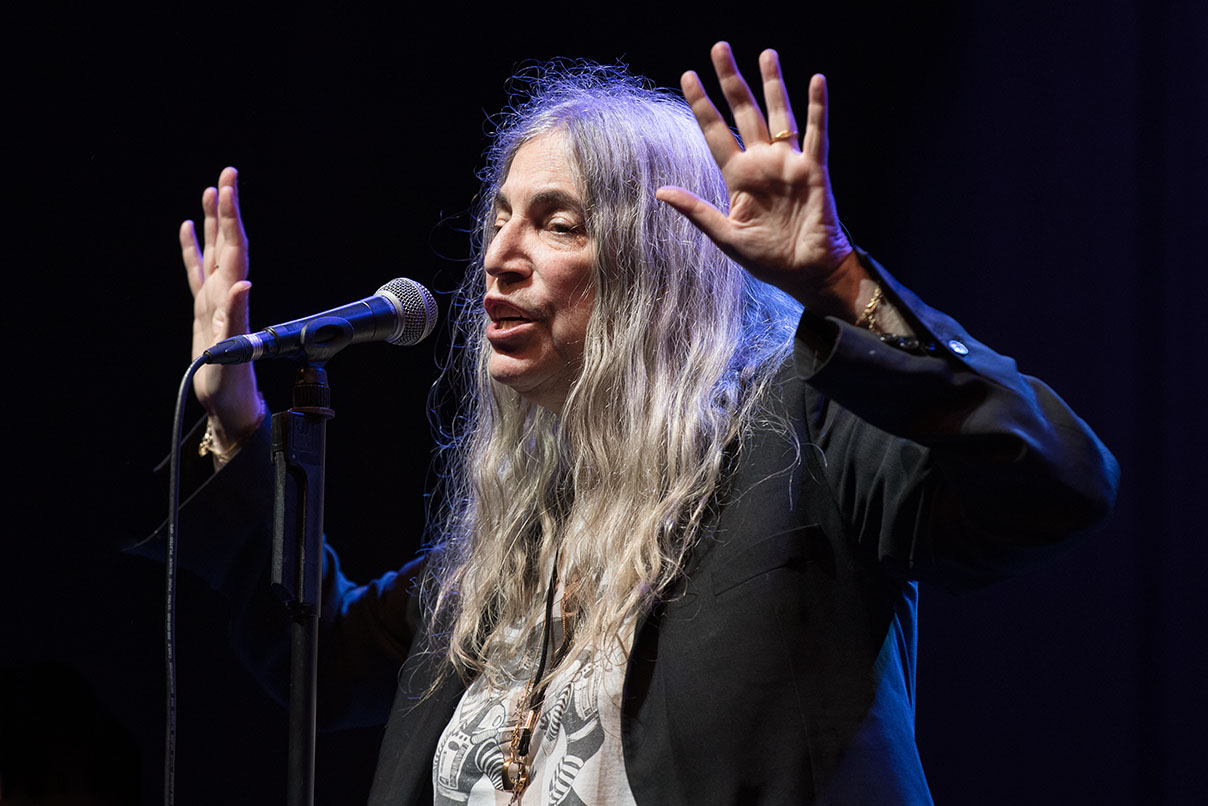 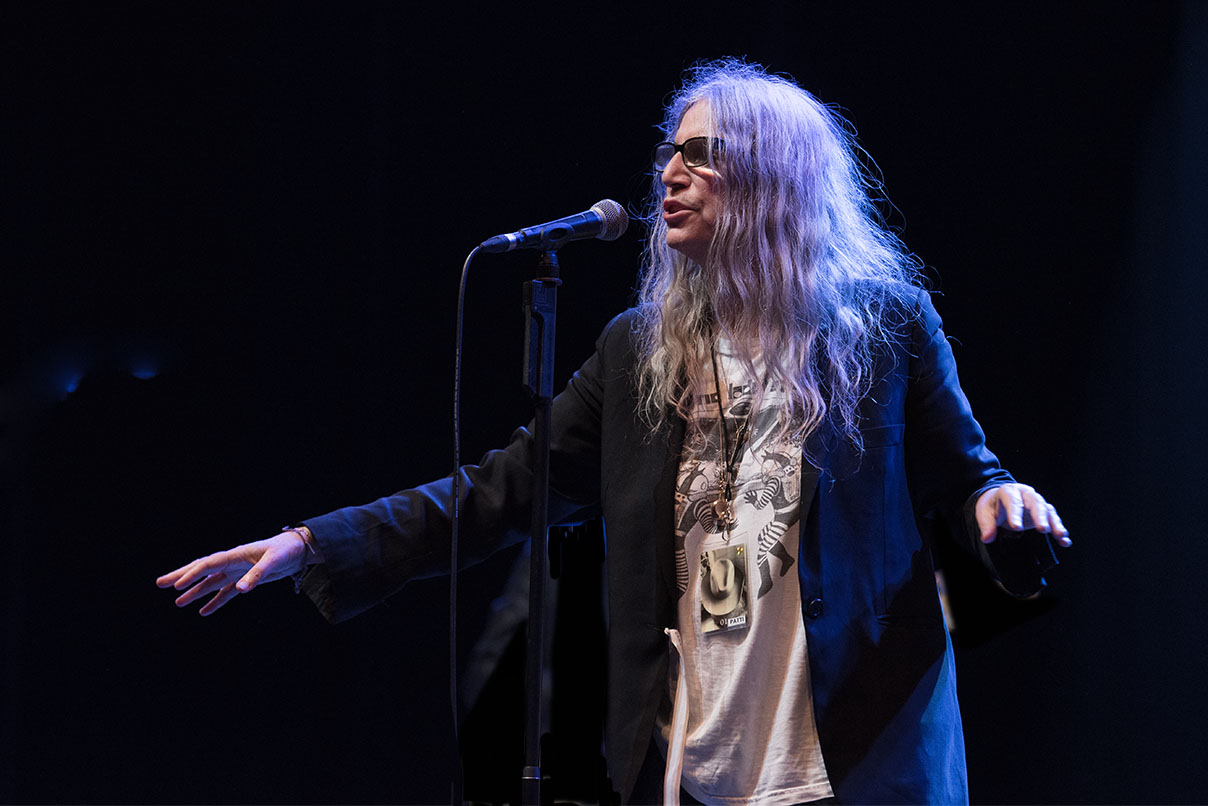 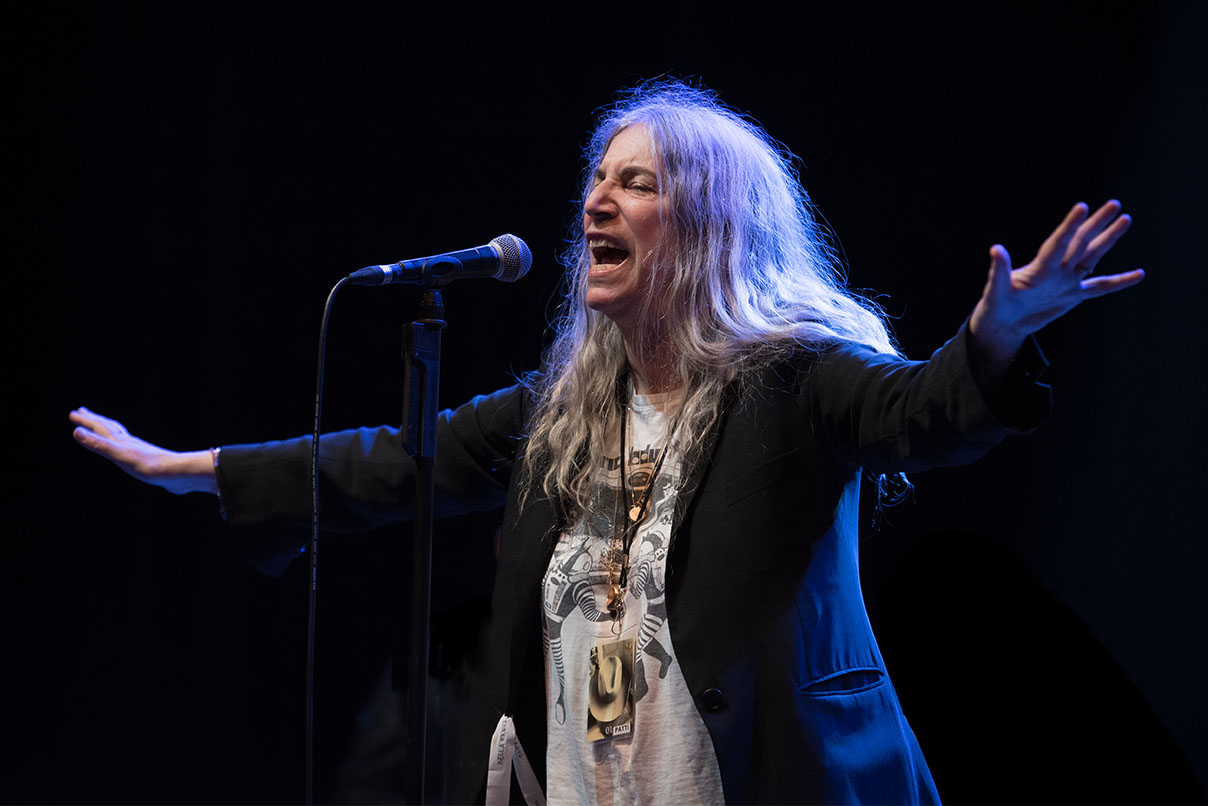 Can’t Help Falling in Love
People Have the Power