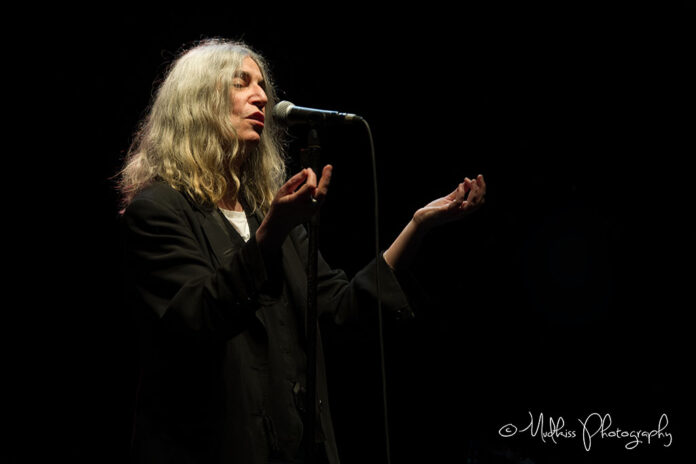 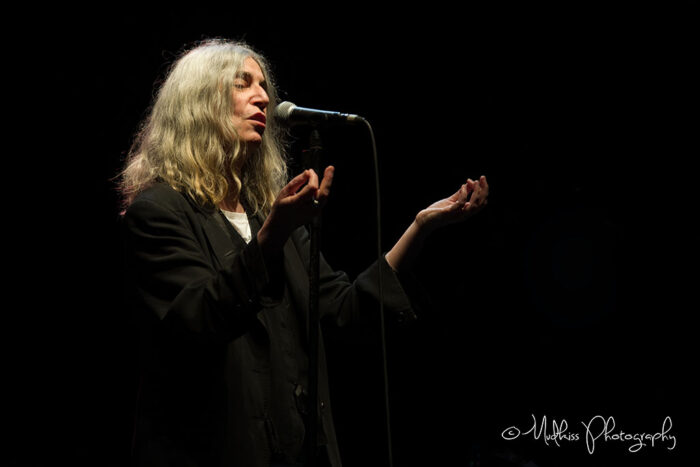 Photo of Patti Smith above and all others on this page © Melanie Smith.

Nathan McIlroy was lucky enough to be in Manchester’s Apollo last night where he was mesmerised by the legendary Patti Smith. Here he reports back, with a full photo gallery supplied by photographer Melanie Smith.

Patti Smith is on shamanic form tonight. Like her hero Arthur Rimbaud, she pulls words from the cosmos and channels heat to the soul. Her debut masterpiece Horses was released forty years (!) ago and tonight’s show manages to breathe new life into this undisputed classic. Witnessing Patti, Lenny Kaye et al, perform these songs is more striking when you realise that there mustn’t have been any studio trickery required to make the record sound so good. Even John Cale’s famously minimal production technique does not prepare you for how brilliant the band are and how passionate Patti’s voice is in the flesh.

‘Birdland’ moved people to tears – a stream of consciousness masterpiece that would sit comfortably alongside the Beat Poets on the page. ‘Free Money’ seems more pertinent in the wake of the financial crash with the refrain of ‘Why don’t we dream it?’ typical of Patti’s inclusive attitude to her fans. She was warm and poignant throughout, half show-woman, part preacher and yet fully herself at all times. 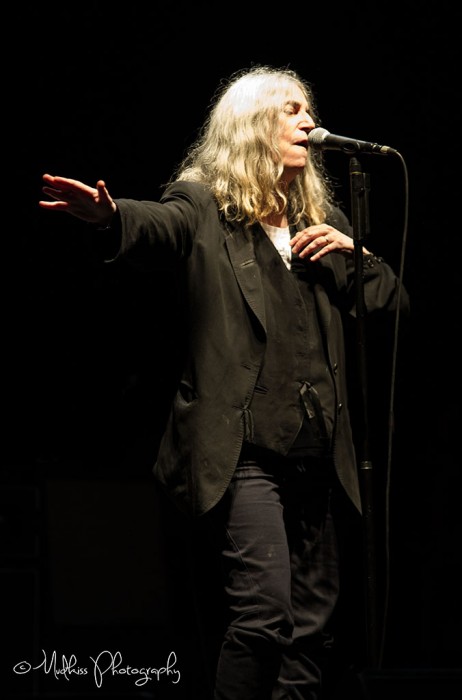 Usually, when an artist revisits a ‘classic’ album from their heyday they do so out of financial necessity which saps the soul out of the subsequent money spinning tour. Tonight’s powerful recital of Horses was anything but going through the motions. It is a brilliant, reaffirming feeling when a live show makes you fall in love with an album all over again and when it happens, you can feel the room become charged with emotion and memories. The audience spanned across generations illustrating the ongoing appeal of this timeless record. Older people were transported to their youth and youths were transported to the cigarette burnt carpets of the Chelsea Hotel.

Age should not factor into an artist’s performance but it should be said that Patti is of an age where some people would struggle with a flight of stairs. Despite this, she had boundless energy throughout. Not in a patronising ‘isn’t she doing well for her age?’ way either. She was putting twenty year olds to shame and you can imagine her shaking her hips in much the same way when playing Motown 45’s with Robert Mapplethorpe when they were both starting off in New York in the late 60’s.

For the second half of the show she played tracks from throughout her career including ‘Because the Night’ and ‘People have the Power’. The latter is often dismissed as being too saccharine and naïve but it was testament to the rest of the show that she managed to get a venue full of misanthropic Mancunians to forget their inhibitions and sing along. She does not give a fuck and this is part of her enduring appeal. 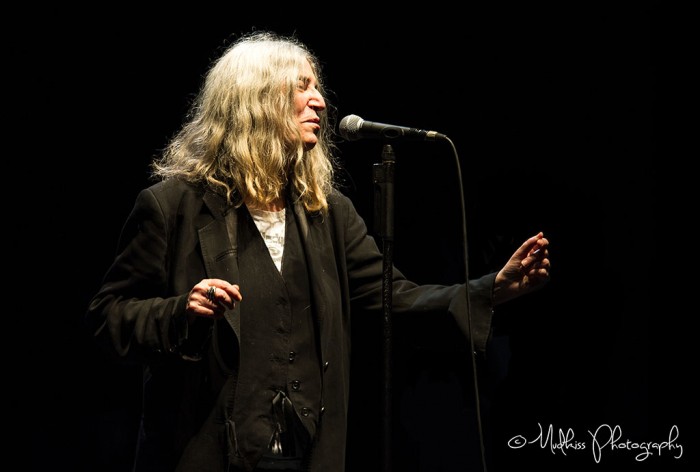 On a personal note, whilst people were shouting for requests I managed to raise my voice loud enough to shriek ‘Piss Factory please!!!!’ To my amazement she recited a few stanzas of what she could remember which made the night even more special. As people who have read her book ‘Just Kids’ will agree, her music and writing is of the same high calibre and Piss Factory is a lyric worthy of its poetic status.

Whilst dedicating Horses last track – ‘Eulogy’ to the ‘people who are no longer around’, people spontaneously began to scream names of beloved artists, writers and even family members. Their catharsis was palpable. Patti Smith inspires responses which are usually reserved for religious figures. This could be a fair comparison – the only difference is that nobody will die for her sins. They just feel more alive.