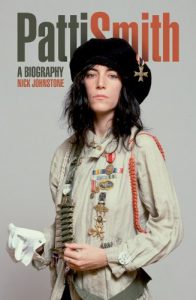 Early on in tonight’s set Patti recalls living on the outskirts of Detroit in the 80s with her late husband MC5 stalwart Fred \’Sonic’ Smith, she reminisces about the neighbouring river regularly flooding their home – the ongoing damage, the lost possessions, sandbags and struggles. Indeed, the wash of troubles endured by Hebden Bridge and neighbouring Todmorden and Mytholmroyd this year, and how these communities rallied together to retrieve some semblance of normality has not only brought Patti to the Trades Club for this intimate flood benefit show but has also informed her entire set.

Plainly Patti is a masterly performer â€â€œ tonight she dances effortlessly between rapturous anthems, plaintive acoustic numbers, relevant readings, candid anecdotes and unrehearsed new songs and arrangements. She is in sensational voice and hinges her performance on tales of resilience, rebirth, community and remembrance â€â€œ pitch perfect for the occasion and thoroughly captivating from the get go.

Joined by Tony Shanahan her collaborator for the past 15 years or so, we are treated to vibrant duo takes on a trio of tracks from \’Banga’ her fine new long player. \’This is the Girl’ is a touching slow swing paean to Amy Winehouse, whereas \’April Fool’ is a catchy piece of playful pop and brings out a big voice from the small audience to join in on the choruses. Title track \’Banga’ an ode to canine loyalty (Banga is Pilate’s dog in Bulgakov’s \’The Master and Margarita’) recalls the metronomic drive and grit of \’Citizen Ship’ from 1979’s \’Wave’, and once again the crowd are hollering along â€œSay! Banga!â€Â

We hear \’Pissing in the River’ from 1976’s \’Radio Ethiopia’, which loses none of its drama when stripped to a core of voice and piano, and elsewhere a breathtaking \’Because the Night’ rouses the Trades Club audience again – â€œMy Greek chorusâ€Â says Patti. It’s worth noting that in most situations singalongs can be uncomfortable, tune-free, mawkish affairs, but not today, not under these circumstances â€â€œ it’s an irrepressible community joined.

Patti and Tony are clearly loving every second of the show, and Patti explains how captivated she is by this small part of West Yorkshire – she’s undeniably moved to have found Sylvia Plath’s grave in nearby Heptonstall, and a shared love of Charlotte BrontÃƒÂ«’s \’Villette’ will bring her back next year alongside her sister to visit the village of Hawarth.

Later Patti recollects on her youth and romance with Robert Mapplethorpe and reads from \’Just Kids’ the tender memoir that she promised him she’d pen just days before his death. A selection from \’The Coral Sea’ Smith’s book of metaphorical prose telling the story of a dying man on a journey to view the Southern Cross constellation, again honouring Mapplethorpe, is stunning, and links perfectly with a poignant version of Crosby, Stills and Nash’s \’Southern Cross’. But Patti can flip the mood on a beat, jumping from heartfelt prose to a funny recollection of the couple in their unfurnished Brooklyn apartment and her being able to spot Mapplethorpe on acid because he’d chosen to soundtrack his trip with longwinded, 60s psychedelic peddlers Vanilla Fudge.

Closing with \’People have the Power’ may seem like a given of course, but it’s delivered with such brazen intensity and received with such exhilaration it’s impossible to imagine any other finale – it’s thrilling to experience in close quarters. Tonight, as with the set as a whole the song feels like an extraordinary work of empowerment and bravery.

You can donate to the Calderdale Flood Emergency Fund here: