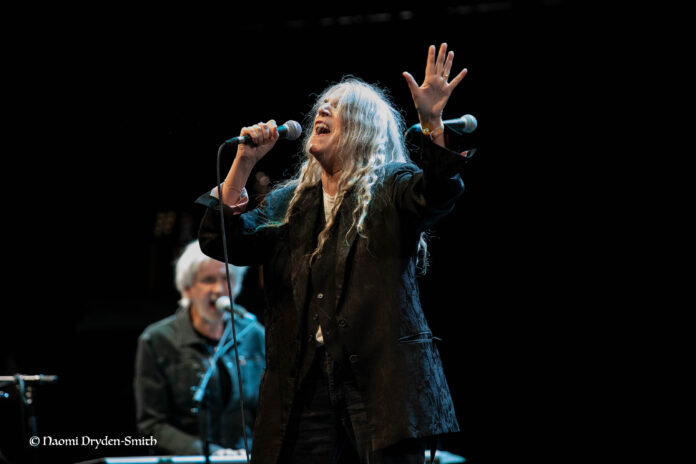 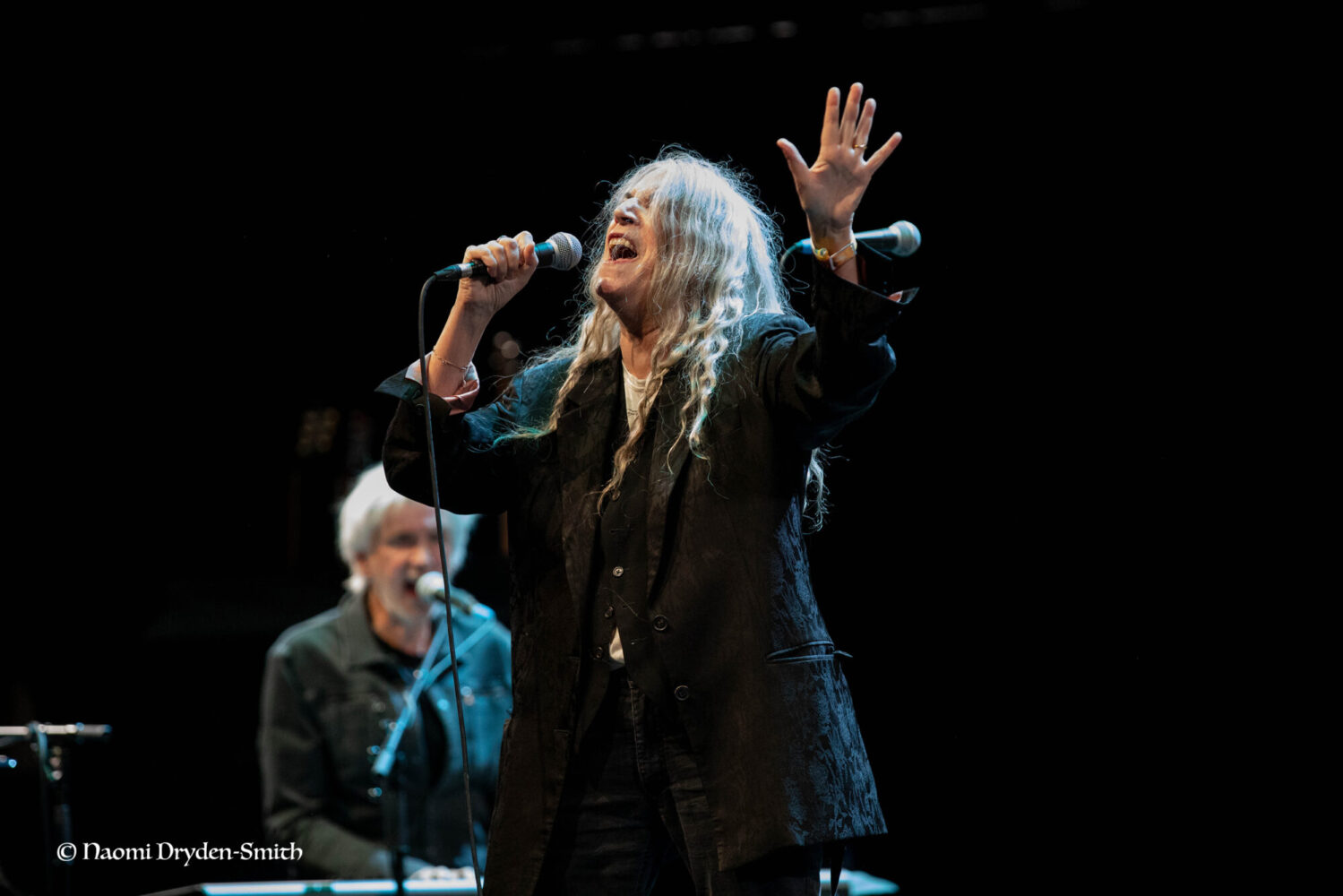 In the same week of the Labour Party conference there’s a whole world more socialism and togetherness on show at Patti Smith’s kick-off of the European leg of her world tour. Elfyn Griffith is awestruck, Naomi Dryden-Smith shoots from London…

‘My first indoor job in 19 months!’ says the living legend that is Patti Smith as she takes the stage at the art-deco Forum in Bath to rapturous applause, clad in a fringed suede Western-style jacket which she sheds midway through the set to reveal a customary black blazer. ‘Back to my old punk self…’ as she puts it.

This is big, this is emotional. We’ve been denied this kind of life-affirming, blood-rushing, experience since the Bug came upon us. So, there is expectation aplenty, genuine excitement, a sense of occasion.

Of course, a troubadour like Patti Smith isn’t going to disappoint, and she doesn’t. At the age of 74 her voice is still incredible, clear and strong, her energy undimmed. The acoustics of the Forum bring out the sharpness of the band. There’s still Lenny Kaye on guitar and Jay Dee Daugherty on drums who have been with her forever, veteran US musician Tony Shanahan on bass and keyboards and her son Jackson Smith (from her marriage to the late MC5 guitarist Fred ‘Sonic’ Smith) on guitar. 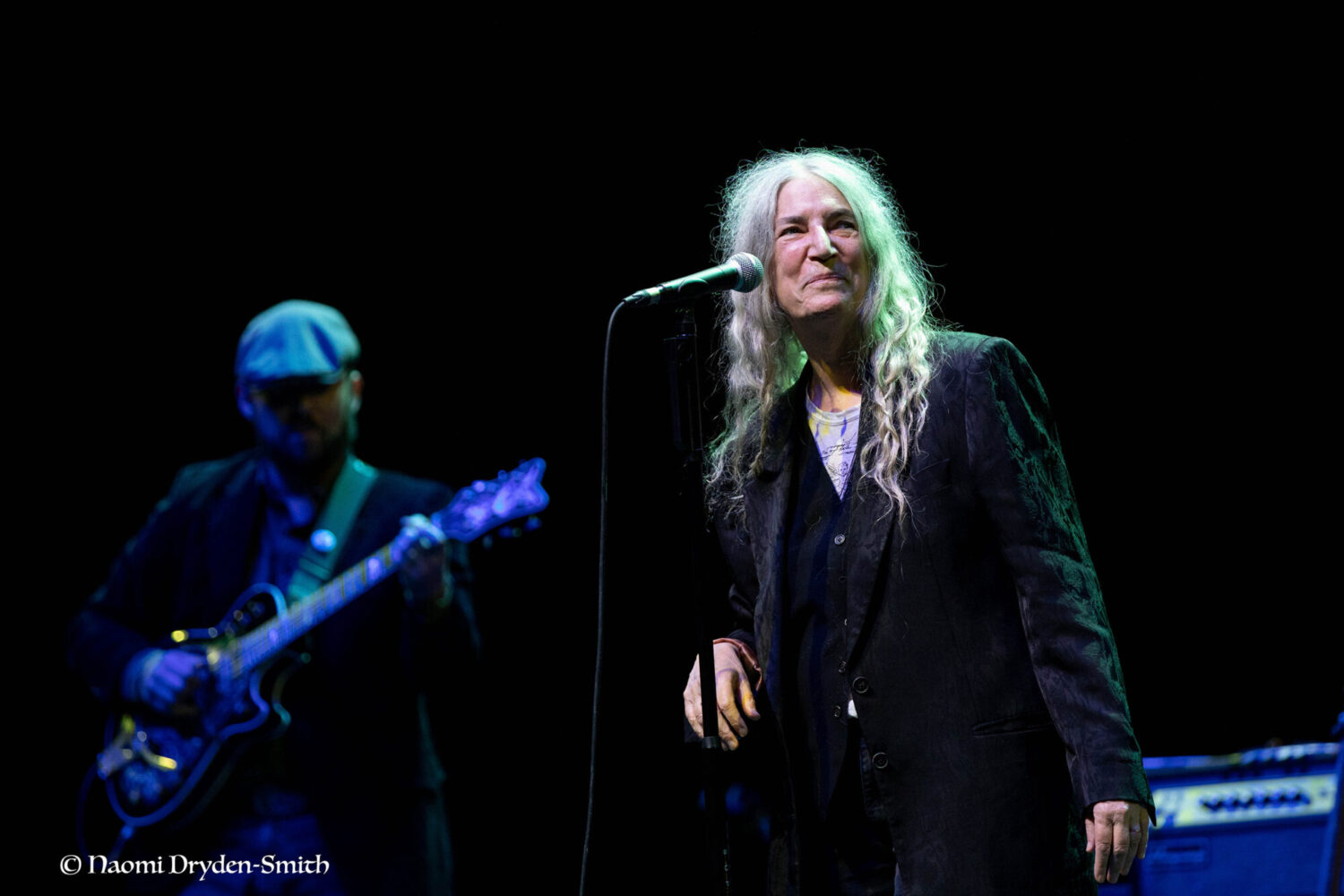 And this New York rock royalty know how to deliver. From the slow-burning opener Grateful through to the fist-clenching encore of People Have The Power this is a flawless, joyously emotional performance.

Her 1975 debut album Horses is obviously delved into for its nuggets of gold: the gentle reggae pulse of Redondo Beach – dedicated to the late great Lee Scratch Perry – the touching beauty of Free Money, and the absolutely coruscating bliss of Land: Horses segueing into Gloria before the encore.

Pissing in A River is a stately build-up with Smith riding the emotion of it at its climax, Dancing Barefoot a blistering gem, her best-known song, the one she wrote with Springsteen, Because The Night a solid stone crowd pleaser. Smith herself straps on a guitar for the four-guitar Television-esque powerhouse of Beneath the Southern Cross, dedicated to our NHS workers.

There’s also a dedication to Charlie Watts with Kaye taking over vocals for a cover of The Stones I’m Free, a tease of Lou Reed’s Walk On The Wild Side thrown in, and lovely versions of Stevie Wonders’ Blame It On the Sun and Bob Dylan’s One Too Many Mornings.

‘We are standing at the crux of an environmental pandemic,’ says Smith before the Horses/Gloria rush, one of her many calls for change, solidarity and unity tonight that have always defined her humanistic beliefs. The aisles fill with bodies joining her in the watusi, the boney maroney, the alligator and the twist…. Yes she can still do it like that!

After the huge rallying cry of People Have The Power, she winds down with The Crickets’ Fade Away, her memorable line ‘I forgot the fucking words’ fitting in perfectly when she does exactly that…

You’re only human Patti, beat punk poet laureate. But one of the best. 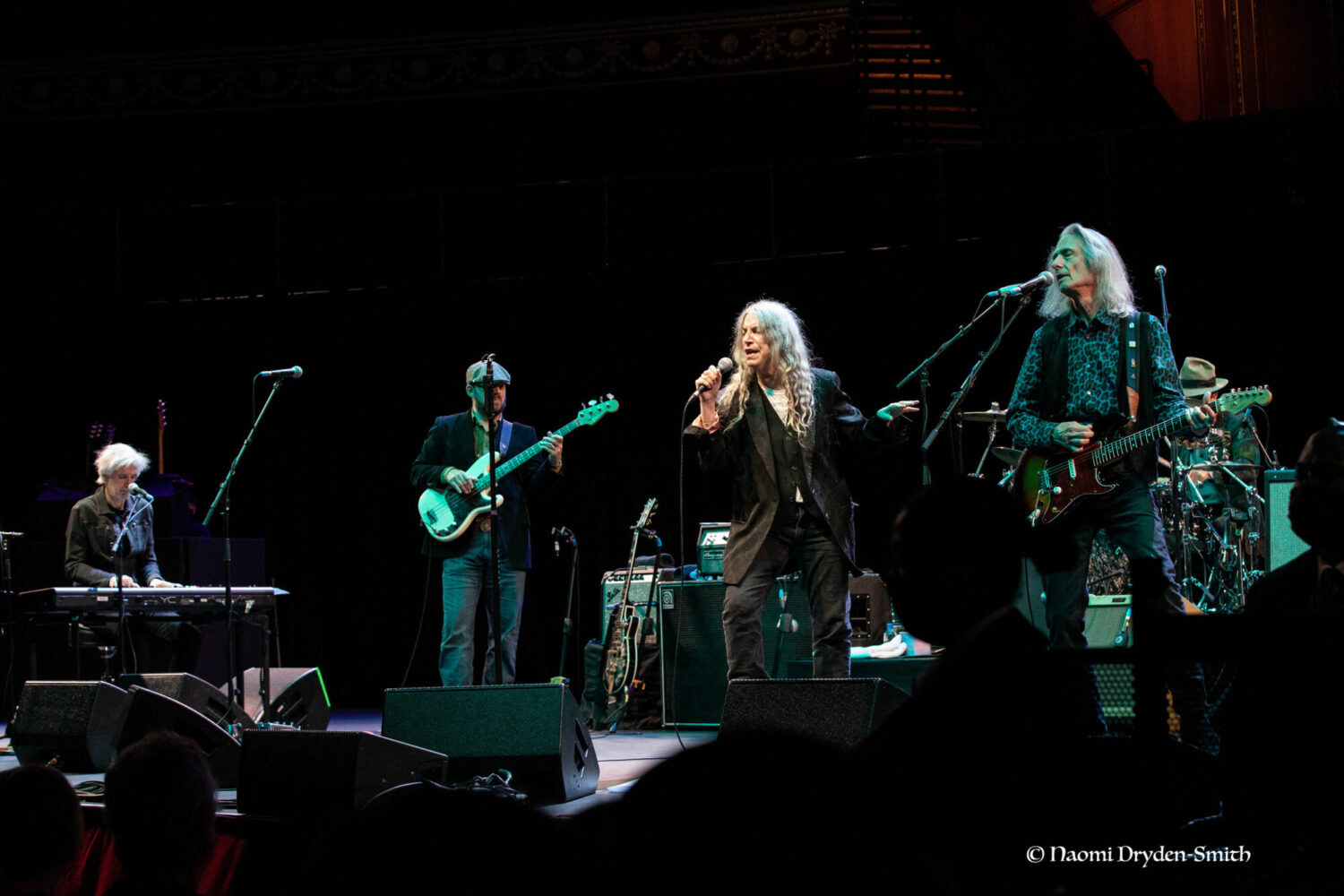