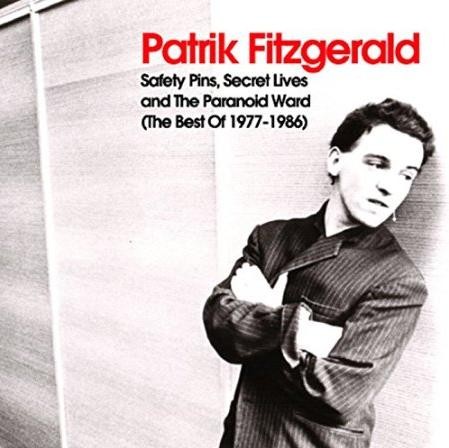 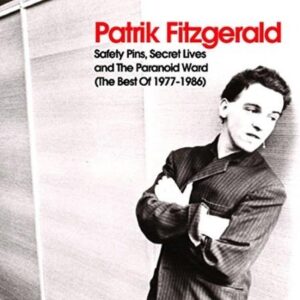 Punk Poet, “the Punk Dylan”, short bloke with guitar and a painfully blunt honesty. Patrik Fitzgerald, The Most Punk Rock Solo artiste there was… and still is.  Ged Babey likes him.

“You, above all others, taught me that the most PUNK anyone can be is to lose the amplifiers, lose the guitars and the laddish inclinations, and just present yourself, no bullshit.” Everett True on Patrik Fitzgerald ( addressing him)

Everyone knows Safety Pin Stuck In My Heart yeah, (in the same way as everyone knows Another Girl, Another Planet… )  but there’s much, much more to Patrik FitzGerald.  One of the most quietly influential and under-appreciated artists of his generation.

I love Patrik. I’ve met him a couple times. And his wife.  Thing is.  Sometimes his oeuvre, his songs, I find so fuckin’ depressing, I just can’t listen to them. And I say that as a fan of his work.  The bleakness, desperation and brutal honesty in his work just makes me… ugh!    Hence the delay in getting this review done.

The stuff about how life is so shit, so loaded against you, the fact that you sometimes seem condemned to endure the bollocks from church and state and law and do-gooders and rule-makers and jobsworths and cow-towers and teachers and coppers and social workers.   You know what I mean?   You just don’t need to hear it sung back at you.

Everyone was a target for the young Patrik (1977-86); the state, the media, families,  trendys, babysitters, doctors…. these songs are based on his experiences of life in the 1970’s and things are probably just as bad nowadays for people who find themselves in the same position. Which is the depressing thing perhaps.

So why should we buy a double-album of his best work ?  Well, because no-one else was saying these things, no-one else was quite as astute and as darkly comical yet cutting-thru-the-bullshit.  And they are good songs. They can make you laugh, make you cry and make you want to punch the walls but they are real.  Full of truth, bitterness and anger and sardonic observations.  They are also full of great little musical and lyrical ideas and inventiveness.  They have a dark romantic streak and a resilience.  I guess that they are ‘the Blues’ without actually being anything like the traditional/what everyone calls the Blues.  These are gritty, urban, monochrome punk rock black & blues.   They are a played on battered acoustic guitar but they are not ‘folk’ either.

Ragged Generation (For Real) is arguably one of Patriks songs which inspired the Protest/Anarcho Wing of punk in both style and content .

Live Out My Stars namechecks Bowie from whom Crass also took their name of course.  There is a distinct connection between Patrik and Crasstafarianism and not just due to Chumbawamba covering Safety-Pin (in a barbershop quartet style in their latter days).

He was always refered to as a punk poet, despite the fact he actually sings, unlike JCC but I guess that songs like Conventions of Life, Little Fishes, Optimism/Reject and Buy Me Sell me are constructed very much like a punk rock haiku.

But there are times when Patrik gets it wrong, making him all the more human and fallible, but not particularly likeable.   In ‘Tonight’ there is a line where he ‘kicks the dog and breaks its nose’ and also listens to the neighbours ‘screwing’ to get his kicks. Irrelevant Battles is also a surprisingly popular song as it slates liberals for worrying too much about peoples suffering abroad than those in your own back yard, and highlights a selfish and narrow viewpoint.  It was written decades ago though and there are plenty of other Irrelevant Battles it could be updated to include.

Pop Star, Pop Star is one of the saddest and strangest songs I’ve ever heard. An Art-School alternative to Career Opportunities where reluctantly the narrator has no choice but to become a Pop Star. It’s all the more ironic today I guess with the X-Factor This Means So Much To Me/ Living The Dream attitude being all around.

There are fifty-two songs on these two cd’s and more than half have been available before on previous compilations but of the later ones, the Gifts & Telegrams and Drifting Towards Violence stuff has been difficult to track down, so it is good to have a comprehensive collection which includes the best of Patrik FitzGerald -the First Nine Years. It goes from the primitivism of Banging and Shouting and Wire-like haiku punk to longer, challenging almost avant-garde stuff with sax, piano and homemade electronica.

Maybe not the most happy-go-lucky singalong double CD set you’ll ever get but an emotional journey in song where only the truth, honesty and dark sense of cynical humour are your guide, sat-nav and passenger

A remarkable artist is Patrik, and a one-off.