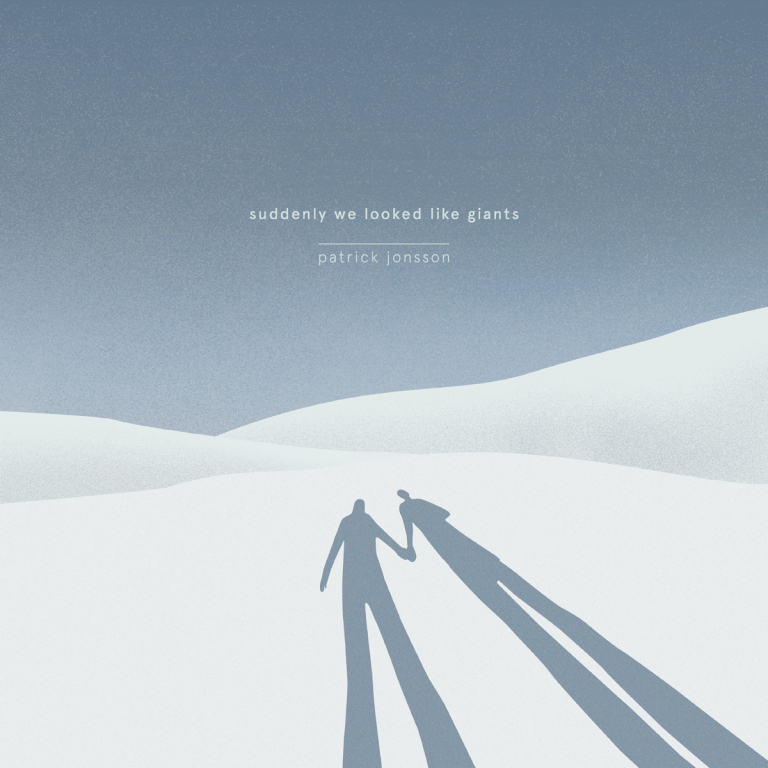 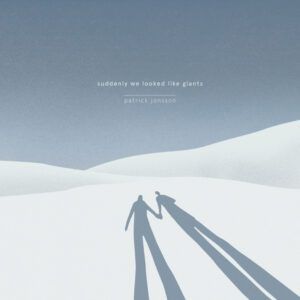 Released digitally last August on Phases, Patrick Jonsson’s Suddenly We Looked Like Giants is now issued on vinyl for the first time.  Lee Ashworth ventures out on a cinematic journey that seeks to explore parallels and interplay between human nature and the natural world.

Emmy nominated composer Patrick Jonsson has been scoring film and TV for some time and it is no surprise to discover that his debut album is beautifully constructed, each composition manifesting itself as another moment spurring the listener on throughout a subtle, abstract narrative arc.

Inspired by his childhood home in Sweden, the album is replete with observations and reflections on place and experience of both the inner and outer varieties.  The title track, as shown in the cover art, is a reference to the long shadows created in the north by the low, slanting winter light, interweaved with our emboldened sense of ourselves, growing larger, ready to take on the world when we are younger.  The track begins with an ambient emanation, evolving, gaining in intensity, raising our sense of expectation before strings and piano eclipse the atmospheric electronica.  You can see your own shadow darkening ahead of you, leaning out into the long metaphorical winter nights.  But there is nothing maudlin in this piece, instead, in keeping with the central metaphor, I can hear Charlie Hunnam as Bosie in Cold Mountain squinting over his gun into the light and screaming about possessing the advantage of the “confidence of youth!”.  This theme clearly sits prominently with Jonsson as it is reprised later in the track Hubris.

Elsewhere, on tracks such as Yrsno a vortex of strings zip around us conveying the storms without and perhaps also within.  The percussion also comes to the fore here, often absent or minimised in modern classical, ambient and the more experimental meanderings of contemporary electronica, but here they are used with a strident confidence, deepening the drama.

Suddenly We Looked Like Giants is refreshing for its changes of pace that culminate in an album with a distinctive profile.  So often such works present a textured atmosphere and sustain it with satisfaction but minimal variation, whereas here, Jonsson’s storytelling power, coupled with his love of rich, warm strings conjures a musical experience that is very clearly defined.  It is fitting that now Jonsson is making music that is not set to moving images, cinematic scenes are so readily formed in one’s mind’s eye when listening.

Something shimmers, reverberating during the fade out of closing track And Then The Sun Was Gone.  Our shadows have become obliterated by the darkness, utterly absorbed.  Like we knew they would.  And in the absence of the warmth of these compositions, the ensuing silence is cold.

Working with Alex Kozobolis, Patrick Jonsson recorded and filmed a beautiful video for And Then The Sun Was Gone at the Angela Burgess Recital Hall at the Royal Academy of Music.  As Patrick says, “We wanted to capture a sense of transience through light and darkness as a visual parallel to the themes of the track, which is about loss and serves as a bookend to the album’s title track.”  Check out the video here: