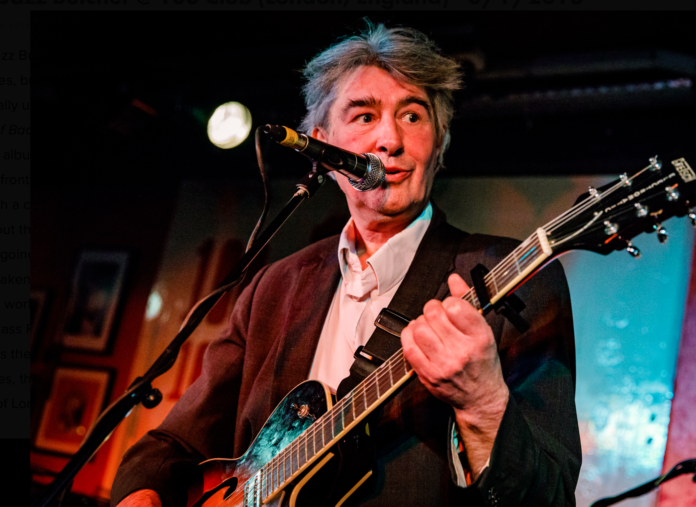 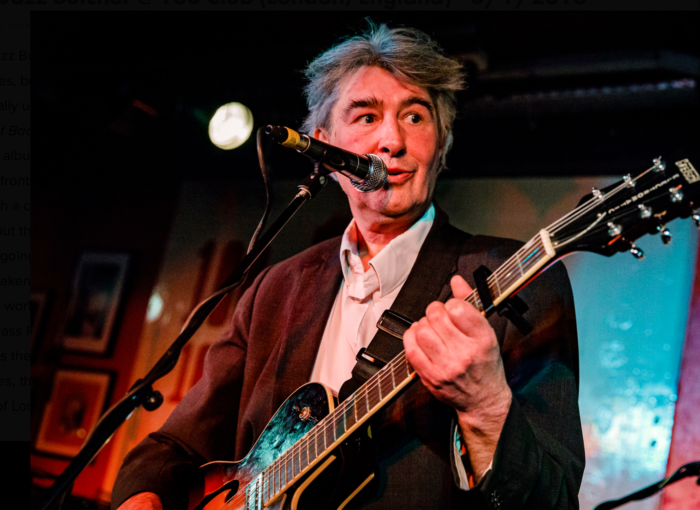 Photo by Matt Condon
Farewell to the Last of the Gentleman Adventurers.
Pat Fish aka The Jazz Butcher has died.
by Alex Maiolo

Sometime around 1987 I walked into a house in Greenville, North Carolina, where a collection of art students and characters bunked. A band I barely knew, called The Birthday Party, was on the stereo making an unholy racket, and I recall seeing a Scratch Acid album at the top of a stack. I gathered my friend who lived there, an absolutely wonderful artist called Paul Friedrich, had cool housemates who were way into noise rock. Scattered amongst the platters was an LP by a band called The Jazz Butcher Conspiracy. “Wow,” I thought, “a band that butchers jazz? What kind of crazy No Wave outfit is that?” We didn’t listen to it, but JBC was officially on my radar.

Weeks later I walked into the local record shop and saw a used copy of Distressed Gentlefolk, by the same band. I bought it, headed home, and immediately put it on the turntable.
Imagine my surprise when I heard the first song was a country tune. It wasn’t unusual for bands to go there. Punk and country were sometimes bedfellows, but certainly the next number would good n’ butchered.
Yeah, really butchered, I’ll bet.
Nope, it was pop. Not noise pop, or art pop, just pop. Then a kind of dream pop thing. Then some sort of hand jive situation. To my horror some of the songs were actually… jazz.
Seriously, when the fuck was the butchering going to happen?

It wasn’t always easy to get Jazz Butcher releases here in the U.S., but luckily I also found a used copy of A Scandal In Bohemia a year later.It marked the first time I’d hear a song living up to the gnarly promise of their name, in “Caroline Wheeler’s Birthday Present.” Bauhaus’ Kevin Haskins and David J. were on this record.
This seemed impossible to me, but also hinted at future discoveries of hard to believe connections.

I cherished these LPs and listened to them constantly. Through each release, and the personnel changes, I followed what The JBC were doing. I bonded with the person who remains my closest friend, to this day, over Cult of the Basement. I started using “Pat Fish” and “The Jazz Butcher” interchangeably, assuming anyone else playing with him was part of The Conspiracy. I finally got to see the band in Chapel Hill, North Carolina, around the time of Condition Blue. The show was so mind-blowingly good, and it was the first time I had a what-the-fuck-is-wrong-with-people-this-band-should-be-huge reaction. The first of many, really.

As the years rolled on, the legendary status of this man only grew in my mind. He was releasing records on the impossibly cool Creation label. He referenced Pynchon, and obscure films. He wrote a song comparing Mark E. Smith to the pope, and assured us that at least an interminable party is “better than a cold bath with someone you dislike.”  There were the side projects, like arty Black Eg. He was connected to great indie bands like Close Lobsters, The Blue Aeroplanes, and The Woodentops. He hosted TV programs. His band consisted of people with peculiar names like Kizzy, Felix, Pascal, and Dooj. He’d studied at Merton College, Oxford, but also ran around with messy, drugged up miscreants like Spacemen 3, having been an early champion of the band, attending their earliest gigs in the piss-soaked pubs of Rugby. He was good looking, elegant, seemed to be everywhere, and connected to everyone who was cool in indie music. It became clear that Pat Fish was a kind of rock n’ roll Zelig, minus the commonplace part. When Jazz Butcher fans gather, this is often the first thing that comes up. He made smart music that didn’t take itself very seriously, and it was played by the best musicians.

Heads were always keen to have the departed Max Eider return to the fold, and I finally got to see him play with The JBC at the turn of the millennium. The newly formed Death Cab for Cutie supported on that tour. It seemed correct that some kids who’d named their outfit after a Bonzo Dog Doo-Dah Band tune would be on the bill. That night was the first time I met Pat, and he was as charming as a fan of the band could have hoped for.

With the rise of social media The Butcher was able to connect with his admirers in a new way, and it was pretty inspiring to see him out there, doing it, not having gone the way of the rock n’ roll also rans. He was great at sharing remembrances and recounting odd happenings. He did online shows which got a lot of us through the lockdown.

About seven years ago, after a few pleasant exchanges in a music chat, I got a friend request from Pat, because that’s the era we live in. In another exchange, many years later, I shared with him it had just occurred to me that I’d never bought a new JBC record, only used. They weren’t always easy to find, over here, so the bins were the best bet. Nevertheless, it meant I’d never given Pat a dime, beyond concert tickets and merch. Feeling like the shittiest fan in history, I gave thanks for the online tip jar, and vowed to use it during the online performances. To my delight, other people seemed to as well. There would always be some message from Pat about how generous people had been, and then maybe something about his black cat Raoul. These eventually became a regular Sunday occurrence, billed as Live From Fishy Mansions.

This past Sunday Pat went live to tell his viewers that he felt like shit, and he just couldn’t play. He seemed truly bothered that he was letting people down, but assured everyone he’d make the show in Bristol, Thursday.

Max Eider wrote “very sad to announce that my old friend Pat Fish died suddenly but peacefully on Tuesday evening. Pat rocked my world in every way and his death leaves a big hole in my life and in my memory, much of which was only stored in his outsized brain. Goodbye mate and thanks for everything. I’m going to miss you.”

Patrick Guy Sibley Huntrods, aka Pat Fish, aka The Jazz Butcher made a lot of people exceedingly happy with his art. He abhorred the fash as much as he adored his cat, and loathed a bigot as much as he loved a pint. He seemed like the kind of guy who would somehow drink and smoke his way to age 97, rather than leaving us at the way too young age of 64.