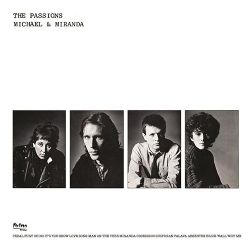 Though The Passions made their main impact at the tail end of the New Wave boom with 1981’s “I’m In Love With A German Film Star” (concerning ex-Clash/Pistols roadie Steve “Roadent” Connelly’s appearance in a German TV film), their roots lay firmly in an earlier time; to wit, the pre-Punk Ladbroke Grove Pub Rock scene.  Clive “Evil C” Timperley was famously a key member of Joe Strummer’s Clash-forerunners the 101ers.  But also Barbara Gogan and drummer Richard Williams had links to R’n’B squat rockers the Derelicts, Williams as a band member with Gogan’s sister Claire (the other participants in the Derelicts eventually became post punk also rans Prag Vec).

The Passions originally alternated between male and female vocals with Mitch Barker as co-lead singer, but by the time of this LP he had left (Barker is the featured vocalist on first single “Needles and Pills” included here, which was on the Soho label that was also home to the Nips and the Inmates releases) leaving Gogan as the band’s focal point going forward.

Timperley’s sometimes choppy, sometimes glacial guitar lines tend to dominate but on this record they most resemble the Au Pairs sound-wise of any other band.  Occasionally there’s a slight Ska or Reggae feel, but the sparse and disciplined backing provides a good back drop for some old fashioned chill-ridden storytelling. It’s a quite scary record.  “Man On The Tube” is perhaps the best example of this; a female counterpoint to “Down In The Tube Station At Midnight”, portraying all the paranoia and real fears of the late night tube ride home.  You go every terrifying inch of the way with the song’s protagonist and the feeling of tension would not be out of place in a Hitchcock film.

If “Obsession” mirrors Poly Styrene’s take on identity crisis’s, gender politics tend to dominate the subject matter; “Why Me” nails it, showing clearly the phoney liberalism of the post-Hippy era for the joke it was – “to be prostitute or wife” still seemed the only choice despite supposed equality. In “Oh No It’s You” familiarity breeds contempt as love turns to passive loathing – the circle is complete but the contradictions keep coming as the perfect love is revealed as a pipe dream and relationships a snare.  It’s despair written large but the Passions get away with it because the singing, the playing and tunes are lithe and live, juxtaposed with the downbeat nature of the lyrics.

“Michael and Miranda” excels at presenting the quandaries of the time in a perfectly realised way with the kind of clear thinking that can only come from minds a little older or at least wiser.  The claustrophobia, suspicions, terror and uncertainty of late 70s life is there for all to see.  They were called the Passions for a reason.

I’ve perhaps made it sound a little bleak, with the subject matter it’s difficult not to, but even so it’s an enthralling and enticing listen and an unjustly forgotten gem, the grimy underside of the New Wave dream a million miles away from “New Pop” to come  but no less enjoyable for that.  Think you’ve heard the best sounds that 1980 Post Punk has to offer – if you haven’t heard this think again.