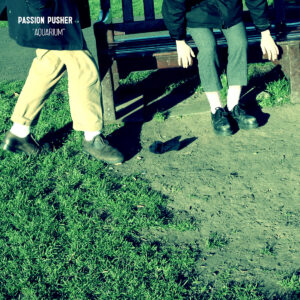 Louder than War’s Ioan Humphreys has a listen to more quirky lo-fi madness from Song, by Toad’s roster in the form of Passion Pusher.

James Gage, aka Passion Pusher started his obsession with music at the tender age of 15, with recordings on various four or eight tracks. By 19, he had uploaded over 220 EPs, albums and demo tapes on Bandcamp! At around the same time Gage adopted the moniker of Passion Pusher. Pretty soon what started as a bedroom project evolved into a network of collaborations bringing together a cast of characters like Cal Donnelly, Sean Armstrong and Jack Mellin from Spinning Coin and Eilidh from Breakfast MUFF.

James soon attracted the attention of Song, By Toad’s Matthew Young, who’s stable of acts on his soon to be cult label have been reviewed by Louder than War several times. After agreeing to put out Passion Pusher‘s first official cassette release, Gage got an offer to record an album in the Song, By Toad home studio, where the entire LP was finished in just three days.

The resulting LP is a ramshackle masterpiece that at times isn’t easy listening, but is bursting with riffs, ideas, gorgeous lyrics and a sensitivity that is rarely seen these days.

Opener Life in The Aquarium has minimal percussion, but is accompanied by a sumptuous organ. A lovely piano riff comes in and Gage’s often strained vocals suit the mood perfectly. Gage’s vocals have a playful and childlike quality in the way that tune (he often sings out of tune) is second to the melody and the effect he is wanting to get across. He is eventually joined by some female harmonies that lift the track to a beautifully simple level.

Conventional Artist has a drum machine backline then noisy guitar improv. The vocals are ‘phoned in’ like early Guided by Voices and are seemingly bellowed down the line.

Pizza Club has a bigger sound than the previous tracks and seems to utilise a full band, albeit a band sounding like they are playing toy instruments except for the electric guitar accompaniment. I like the effect. The track has a great melody and Gage’s often baritone (and out of tune) vocals are delivered in a laconic drawl that is very infectious.

My Guy has a great guitar riff that sounds like very early Pavement EPs. Again, lovely female vocal harmonies join in to give it a contrast and a very Moldy Peaches feel. It is noisy, clamouring and chaotic. I love it.

Both Good Thoughts and Really Wonderful are again like early Guided by Voices and have great riffs and melodies to die for. Again they are chaotic, but you can always find the ‘song’ or ‘tune’ in these compositions and that is what I like about Passion Pusher. It’s may not be easy to find them, but sometimes music isn’t easy and you just have to try that little harder!

Lead single Sauchiehall Street has a repetitive, yet playful riff with Gage’s pained vocals creating a lo-fi racket. Yet, it’s a melodic racket and seeps infer the skin. Follow up Bad Character has a again great guitar rock aspects and influences that show the myriad influences that Gage has.

Sex Cult has lovely melodies and gorgeous chord progressions and the laid back vocals suit the sound just perfectly.
Final track Sleep Standing in a Country Back Park is the only track to have the vocals high in the mix and the closest you would get to hi-fi ‘normal’ production. But yet again it has the ever present melodies and song structure that many bands would give their right arms for. Gage seems to have this talent in spades.

The whole album is ramshackle, with ideas for songs coming fast and furious. They are all short songs and barely any of them reaching the 3 minute mark. The feeling you get from Passion Pusher is of an artist borne from the outsider artist style of Jandek or Daniel Johnston, with elements of the New York Anti-folk movement (The Moldy Peaches, Kimya Dawson, etc) and also the lo-fi alt rock of Truman’s Water, early Pavement, Loobiecore and early Guided By Voices. I think there are probably loads of artists out there who would love to bottle what Passion Pusher has. This ability to produce a prolific amount of songs that have structure and melodies (albeit put together in a lo-fi way) is very rarely seen and I would include Gage’s abilities to craft songs way up there with Robert Pollard.