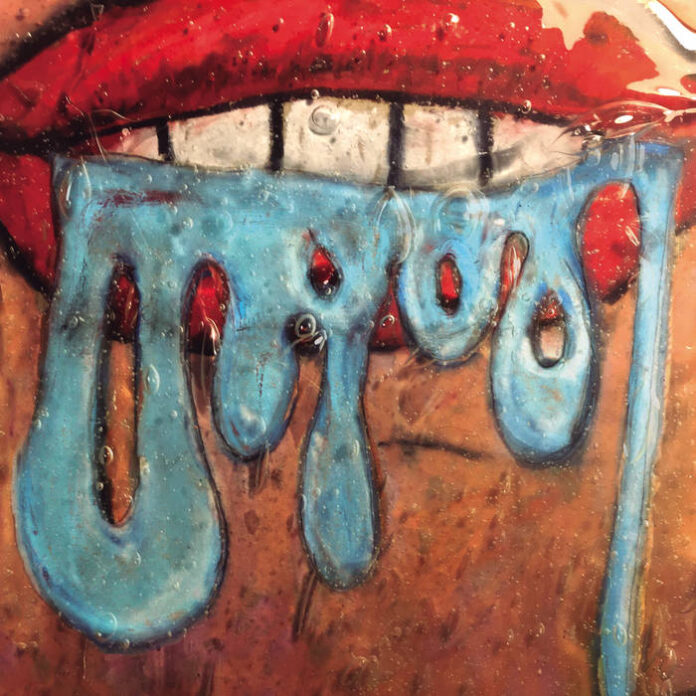 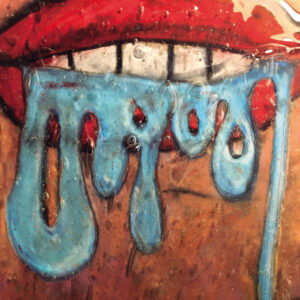 The legendary Part Chimp return from the dead with an album of riff-heavy noise-rock. Andy Brown sets his inner ape free and gives Drool a listen for Louder Than War.

I think it was sometime around the mid-two thousand’s that I first saw Part Chimp. Memory can be a tricky customer when it comes to live shows from a long time ago yet I can clearly recall two things about that gig at The Brudenell Social Club: it was a genuinely exciting performance and it was extremely LOUD. The London-based noise-rock legends had a reputation to uphold so weren’t about to turn in a subdued set. Fast forward to 2021 and the primitive, pedal-worshipping primates are still enamoured by noise. Drool stands as the bands fifth LP and it isn’t here to mess around.

Back From The Dead sets the tone for the album with a raw, unrestrained blast of ROCK. Yes, I’m aware of my gratuitous use of capital letters yet Drool demands such reckless and unsightly over-punctuation. The music contained within the band’s latest offering is unremittingly and unashamedly larger-than-life. Head Chimp Tim Cedar has described the record as, “the stupid amounts of fun you can have with very loud amps, stupid tunings, weird pedals and weird people”. As tagline’s go, it’s a pretty enticing one. It isn’t rocket science: Part Chimp play loud, cathartic and satisfyingly raucous rock.

A track like One In The Eye emphasises the band’s strengths; Cedar and his band of apes take a big, fat riff and play it until their fingers bleed. A punishing sludge-fest worthy of the ever-mighty Melvins. Drool is undoubtedly an album that will translate particularly well when played live; it’s there that this barrage of disgustingly heavy riffs will ultimately hit the hardest. Just take the sneering brilliance of the album’s title track and it’s endlessly propulsive riff. Close your eyes and you can just about picture a room full of noise-rock aficionados nodding along in time. Gleefully appreciative faces smothered in sweat and drool. Man, I’m almost salivating just thinking about seeing Part Chimp perform again.

There’s not a huge amount of variety to be found on Drool yet that’s not necessarily what I’m after from a new Chimp album. It’s not that they do anything that hasn’t been done before it’s just that they do what they do incredibly well. Take a track like Dirty Bird: it starts as creepy, subdued art-rock before exploding into the bands trademark wall-of-noise. A ridiculously satisfying take on the reliable quiet/ loud Pixies dynamic. No frills yet thoroughly thrilling; Part Chimp know exactly what they’re doing. By devoting themselves to the persuasive power of a fuzz-laden riff the band fill a rock shaped hole in my grateful heart. And thank the gods of noise-rock that they exist because Drool is exactly what my anxious, pandemic-ravaged soul has been screaming out for.

Drool manages to capture the band’s undeniable power in all its ragged glory. Jon Hamilton’s excitable, hard hitting drumming thunders behind a sheer wall of unruly feedback and blistering riffs. Joe McLaughlin and new member Robin Freeman bring the bass, adding further depth to the sonic sludge. The twin guitars of Cedar and Iain Hinchliffe hit like a tsunami. A tidal wave of drool. It doesn’t sound like the work of a band laboriously recording take-after-take, it sounds spontaneous and wild. There’s something wonderfully unkempt about the whole thing. There’s an undercurrent of chaos here that reminds me of acts like the terminally underappreciated Truman’s Water. Vocals that strain to be heard over the noise and a feeling that everything could fall apart at any second.

There’s a nod to their contemporaries with a guest appearance by Tim Farthing of fellow London-based noise-rockers, Hey Colossus. It’s True, Man is one of the fiercest tracks here; a cantankerous, spittle-speckled slice of first-class filth. Both acts started around the early two-thousands and it’s great to know they’re still producing tunes of this calibre. The album’s 38 minute bombardment comes to a close with the mind-blowing Worms. By this point the needle isn’t simply in-the-red, it’s snapped clean off and set the entire room ablaze. A fantastically ugly, confrontational dirge of frazzled riffs and frayed tempers. With the UK cautiously opening up again and with live music on the horizon, it’s high time you broke the bars and unleashed your inner chimp!