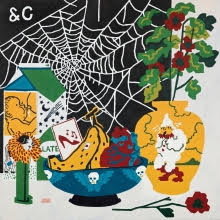 The enigmatic social media shy Parquet Courts return with an album that’s as diverse as ever. They’ve piled up the funk and disco, delved into Krautrock and even gone all Eighties on our music junkie minds! Wayne AF Carey dives into album number seven from the New Yorkers who like to push the boundaries…

For a band that have never shied from experimenting with different sounds, this is an eye opener of a record. Rodaidh McDonald, producer of Hot Chip, The xx and David Byrne takes the helm with A Savage coming down from his trips (literally) in Italy armed with a bag of acid laced tunes full of groove. Take the first track Walking At A Downtown Pace which is pure Parquet Courts in sound and lyrics about Savage’s speedy walking on an unmasked empty avenue in New York, a funky laid back stoned guitar riff laced with a cool bass groove and an anthemic PC by numbers tune. Don’t let this fool you. Black Widow Spider chugs along with a cool as fuck fuzz guitar and lo fi drums that change pace throughout and it’s a song that treads on the subject of capitalism, a large bugbear of the band. Marathon Of Anger goes all Screamadelica and totally changes tact with the sound going all dub funk. It’s got a very Talking Heads feel a la Remain In Light era, a sliver of dark funk that was written with the George Floyd outrage in mind and the feelings on the street at the time.

Just Shadows is a country like ditty which talks about people control and curated life from the higher echelons. Sounds sinister yet the song is a floating mantra full of nervous joy. Plant Life started as a forty minute jam that was stripped down to ten minutes, then halved for this album. It’s a slow vibed funky as fuck tune with samples floating in and out and it just chills you out. A proper head nodder that makes you wish you’d witnessed the forty minute jam with a fat spliff. Application Apparatus is a cracking tune that harks back to real eighties industrial electronica with a hint of Pink Floyd thrown into the mix. A foreboding bass line, a pulsating krautrock beat and lyrics about alienation that build into a cacophony of robotic sounds that dance through your eardrums with a monotonous dirty riff.

Homo Sapien is the closest you get to classic Light Up Gold era Parquet Courts. A straight up slow paced lo fi punk jam that doesn’t fuck about with a cracking little simple guitar riff. Sympathy For Life brings out the funk with an addictive bass line backed with some cool as fuck drumming and a Doors-esque bit of keyboards that bounce around for effect. It’s all about the bass on this. A proper bit of disco boogaloo going on here! Zoom Out is in a similar vein. A funky guitar riff that brings Nile Rogers jamming with Frantz and Weymouth to mind with that great rhythm section. Trullo is another laid back funky jam full of zany ideas that keeps you interested before the excellent closer Pulcinella, inspired by a souvenir of the masked Commedia dell’Arte character of the same name. A beautiful track that’s so laid back it’s horizontal. A mellow track with a lovely riff that accompanies A Savages New York drawl and hits you with that note that sends shivers up your spine. A great tune that catches you in the gut.

Another great album from the band that keep giving and won’t be going away too soon with this standard. Why I’ve always looked forward to every release. A big (but not too big) departure from the party of Wide Awake!, yet the funk and groove is still flowing with a darker element hidden between the cracks of A Savage’s trippy sidewalks…