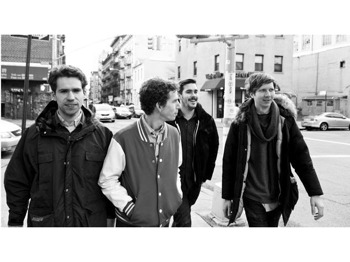 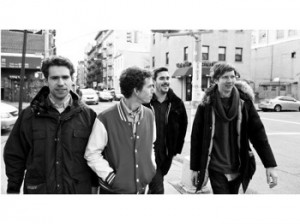 “What better way to spend Valentine’s night than in the company of two of this years most hotly anticipated bands, Eagulls and Parquet Courts?” Ask Louder Than War’s Simon Kvalheim.

The house full signs were up at Concorde 2 for this gig which, considering the awful weather, shows that live music is indeed alive and kicking.

First up, Eagulls are one of the bands rightly touted as one of this year’s ones to watch. The Leeds based five piece have their debut album out soon and judging by this it’s going to be a great recording. Lead vocalist George Mitchell is a lanky beanpole of a frontman bringing to mind Ian Curtis and Liam Gallagher in his mannerisms and sounding not unlike early Robert Smith. Indeed, the band remind me of early The Cure mixed with Joy Division and The Psychedelic Furs. A good pedigree.

Highlights of the set are the latest single Nerve Endings together with Moulting and Coffin from the earlier EP. Unfortunately the set lasted for just under thirty minutes and with no encore they were gone too soon. As I said, one to watch – I’ll definitely be looking out for the album.

Parquet Courts, from Brooklyn, released one of the great albums of 2013 in Light Up Gold and most of the set is drawn from it. Guitarists  Andrew Savage and Austin Brown share the lead vocals and the band sound like a cross between Velvet Underground and The Modern Lovers with a smattering of Television added in for good measure.

Opening with a new tune, She’s Rolling, they play an hour of great music with an excellent sound and soon have the Concorde 2 bopping along merrily. Highlights include Master Of My Craft with its surf guitar intro, Borrowed Time, which gets the throng moving with it’s stop/start motiff, N. Dakota with its throbbing bass intro and Stoned And Starving which makes you want to visit Ridgewood, Queens and has a great instrumental break.

You’ve Got Me Wondering Now keeps things moving sweetly with another William Reid guitar break and Descend [The Way] is a class three chord punker. Yonder Is Closer To The Heart has a great bass intro before descending into madness and the set ends with another rocker, Light Up Gold, before another new one, Sunbathin’ Animal.

A great time was had by all. My first gig of the year and I bet I don’t see too many better before the end of 2014.

Parquet Courts are a great band and judging by the new tunes should carry on that way into the future. The only bad point was no encore, but maybe that is as it should be. Catch this band if you have the chance.

All words by Simon Kvalheim, read his Louder Than War archive here.