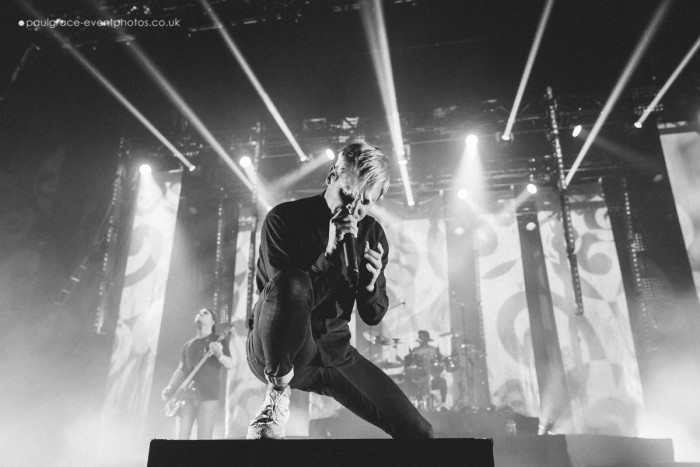 Parkway Drive’s Ire tour stopped off in London last weekend – Paul Grace was there to see the boys from down under tear the roof off the Brixton Academy.

Australian metalcore rockers Parkway Drive are fast approaching the end of a European tour to promote their acclaimed album Ire, but not before a stop in London last weekend for a sell-out show.

There was already a long queue snaking around the Academy as I arrived, just after the doors opened.

First up were fellow Aussie deathcore group, Thy Art Is Murder, who played a quick-paced set underpinned by heavy tribal percussion and satanic vocals. Probably a bit dark for my liking but most of the audience seemed to love them and sung (screamed!?!) along with a lot of the tunes.

Southampton’s Bury Tomorrow were on next. Definitely easier on the ear but with just as much passion, their sound more melodic and with a good mix of metalcore/clean vox. Singer Dani clearly knows how to work the crowd – I can see these lads are destined for very big things. 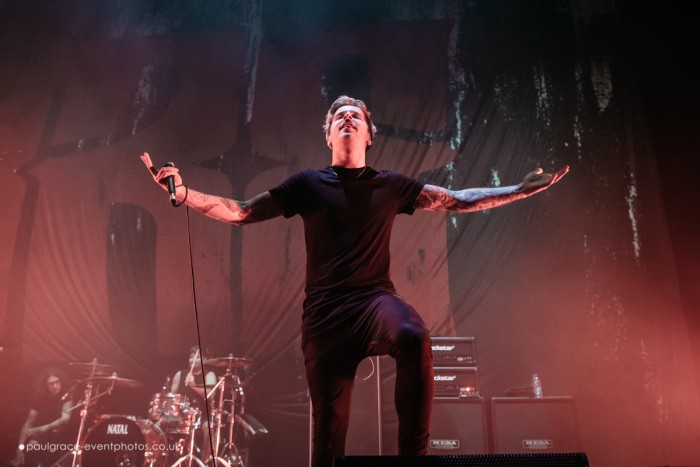 Parkway Drive finally hit the stage just after 9:30pm. Front man Winston McCall initially appearing in silhouette behind a giant screen while the opening guitar riffs and pounding drumming intro of “Destroyer” filled the room. The curtain finally dropping when the song fully kicked in, triggering a huge explosion of blinding lights and confetti canons.

And from that moment on Parkway Drive had the fans in the palms of their hands, their heightened levels of infectious energy immediately over spilling into the moshing and surfing crowd.

Indeed, due to the very “enthusiastic” nature of their devoted followers, we were warned in advance that we might be pulled out of the photography pit depending on how rough things became. Fortunately I managed to stay in there for my full 3 song quota but not without receiving a couple of frenzied kicks for good measure.

Musically Parkway Drive’s sound is a fresh mix of classic metal riffs, growling lyrics and catchy choruses. McCall is a fitting lead – devilishly handsome, bouncingly effervescent and with a voice so powerful it could floor an ox. In between tracks McCall offered wise words such as; “Whatever you do in life, be happy”. Simple advice but delivered with meaning and very much straight from the heart.

Understandably most of Parkway Drive’s 13 track set consisted of songs from last year’s Ire. “Vice Grip” with its yeah-yeah-yeah sing-along chorus was a personal highlight and predictably caused an eruption. The band still played a solid selection from their 4 previous albums though, and were joined half way through by Formula 1 racing driver Daniel Ricciardo, who was guest vocalist on “Deliver Me”.

Throughout the gig, the super slick production ensured the atmosphere reached regular fever pitch peaks with carefully timed CO2 blasts, mind-mangling lighting and enormous fire balls. The fans sucked it all in (myself included!), many of whom appeared to be experiencing the effects of a 90 minute long orgasm! 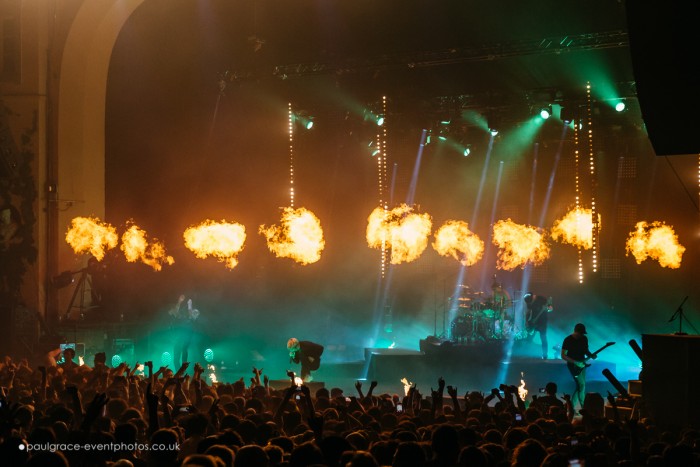 After such an exhilarating set, it was only right that Parkway Drive returned for an encore. The emptiness of the break was abruptly filled with a druid-style drone indicating “Crushed” was to follow, McCall atmospherically standing on the front of the stage beneath a single spotlight and holding a burning flare for its intro.

Parkway Drive closed with a scorching rendition of “Home Is For The Heartless”, their departure punctuated with a spectacular stage-wide cascade of fire and sparks.

A truly stunning show performed with drive, confidence and awesome production, and giving clear indication that 2016 is going to be a huge year for the boys from down under.