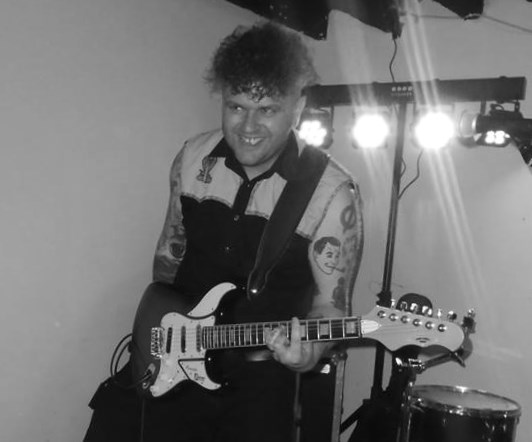 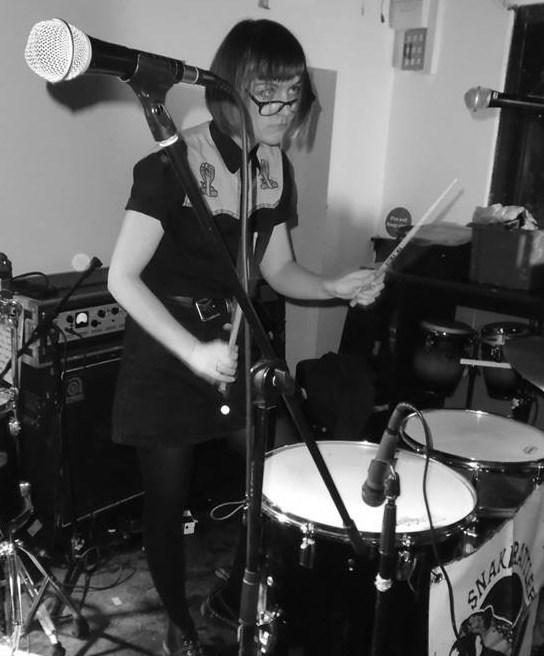 The Parkinsons, Snakerattlers, the Glorias -the Old Barn, Southsea

A Chris Abbot production at the venue for many a boozy punk rock’n’roll gig in Southsea (the cool part of Portsmouth).

I shall review this night in reverse order… probably because I remember more about the start of the night!

Last time I saw the Parkinsons was 2003.  I went home with a massive black eye and was covered in bruises.  The singer , Afonso didn’t mean to do it. He was just hyper-active and a whirlwind of sweat and muscle.  We had a little dance.  I was approaching 40 and he was half my age and a lot fitter, so I ended up a battered wreck.  Maybe I shouldn’t’ve done a ‘wanker’ gesture at him, when he harangued the audience for being too lazy to move.

Fifteen years on and I was confident the Parkinsons would be a bit less manic.

Boy, was I wrong.

After a couple songs Afonso is just wearing skimpy shorts and trainers and jumping into the audience, climbing tables, gurning, flexing, giving 200%.  He is a fuckin’ rock’n’roll athlete! Now a tattoo-ed motherfucker he barely looks a year older, let alone fifteen, but is more a skinny Henry Rollins moves-wise than the Stiv Bators-inspired kamikaze frontman he was.  They still are a Maximum Rock’n’Roll band and great fun to watch.  Despite having a keyboard-player now, they are still total punk rock’n’roll energy – MC5, Stooges style.  Even though they must be getting to the end of their Thirties, the Parkinsons are still the youngest people in the room -which doesn’t go un-noticed – and the mickey is well and truly taken by the wirey singer.

Because they are just such a manic spectacle… afterwards you have trouble remembering a single song ( title, tune, chorus..)  It seems to be all about the performance and the songs take second place. ( Bad Girl  and So Lonely stick in my mind – and no, neither are covers…)   Maybe I’m just trying to explain or justify why I’ve never bought a single record by them.  The documentary movie (available on DVD) looks bloody brilliant though and I wouldn’t hesitate to see them live again…. and maybe I should invest in some recordings.

The Snakerattlers I have heard loads of good things about and they didn’t disappoint. Portsmouth and the band were made for each other.  Quiffs and twangy guitar have been ever-present in the city and an unpretentious get down and dirty attitude.  Dan Gott is a bear of a man , the Blutto to Naomi’s Olive Oyl.  She is the coolest stand-up drummer since Mo Tucker.  With specs and bobbed-hair she looks like a shy librarian or swotty book-worm but she is possessed with the evil spirit of rock’n’roll and can actually kill a man with one hard-stare over the top of her glasses.   Daniel (born in a lions den, lived on raw meat as a child…) can do a fantastic man-insane, teeth-gritted look too… in-between picking out twangy tunes that reverberate and echo as if they were coming from the bottom of a well… or indeed the depths of hell.

(Phil Newell reviewed This Is Rattlerock last July –have a read for detailed info about the songs…). Link Wray, the Cramps and so on are influences, but Snakerattlers are a fully-formed one-off of a band and a beautiful thing to see, a husband and wife completely devoted to each other and to the dark art of primitive rock’n’roll.

First on were local heroes, The Glorias who apparently played badly at their previous gig.  Also they are still without their drummer, Den Barry due to ill health ( get well soon mate)  so Steve Kirk (UK Ramones, Night of Treason… all-round good bloke) fills in.  There doesn’t seem to be any foldback or onstage sound.  It all looks like its gonna go a bit Pete Tong (again)… but somehow they end up being bloody great.  They sounded just like Johnny Thunders at the Mudd Club. with  feedback,  hollerin,’ slip sliddin’ guitar – cranked up.  Nish grand-standing, pointing his bass neck to the ceiling. Their hardcore of fans  dancing and cheering….  Ending on a slamming version of  Brand New Cadillac, they were just perfect.  A great start to a brilliant night.

The only sour note was the new management at the adjoining pub locking out the gig-goers and ripping everyone off with over-priced cans as there was no draught beer in the Barn.  Credit to the punters for not ‘kicking-off’ about it, but then again, they were too busy enjoying three heroic bands, playing what was probably the best gig in Pompey for some time.

Thanks to Jackie Cooper for use of her photos.