Home Music Bands Parker’s Band: If I Had A Therapist – video premiere 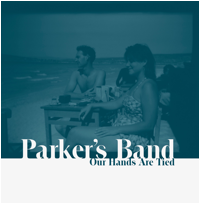 On 2 March 2018 Green Nova release Our Hands Are Tied, the debut album by Parker’s Band.

Parker’s Band is fronted by Owen Parker, who is joined by his wife Emily on vocals. As well as the family name, the band is also named as a tribute to the Steely Dan song Parker’s Band.

It’s the debut album from a major talent who has written and worked with artists including: Pet Shop Boys, Simple Minds, Peter Gabriel, Blondie and Peter Green and produced by multiple Grammy-winner James Brown.

Get a taster of the album with an exclusive premiere of the video for If I Had A Therapist here:

The result of all that musical stealth-work, Our Hands Are Tied is an album that finds bright airy spaces in which to display the emotional complexity of the songs that inhabit that space. The earliest fragments of the album date back as far as 1999 – Yellow Stickers started life as a chorus and melody that Owen wrote in Studio One of Abbey Road at 2am, although it was in 2014 that, after reading Mark Ellen’s memoir Rock Stars Stole My Life that he was finally moved to write the lyrics.

Because Our Hands Are Tied draws from all areas of Owen’s life, it’s only natural that there should be a song or two on there inspired by some of his experiences as a jobbing songwriter, acting as midwife to the half-formed ideas of the A-listers he has, on occasion, been tasked to work with. Spidering out over incongruously hymnal chords, You And Your Confidence is a reflection upon those with the ability to make a little talent go along, the sort of characters with titanium self-belief. You’re Not Invited To My Wedding Anymore draws on Owen’s professional experience, albeit in a more oblique capacity, being in part inspired by binge-watching The Wire and the strange parallels you can draw between local government in Baltimore and the business of being in a touring band!

Perhaps the most striking thing about this debut offering from Parker’s Band is how  easily the whole thing coheres. The exquisite air of gauzy longing that unites these eight songs is, in part, thanks to Owen’s childhood friend and producer James Brown. Working from his upstate New York studio, James really went to town on the songs sent to him, adding extra harmonies, textures and instruments, in the process becoming the third member of Parker’s Band.