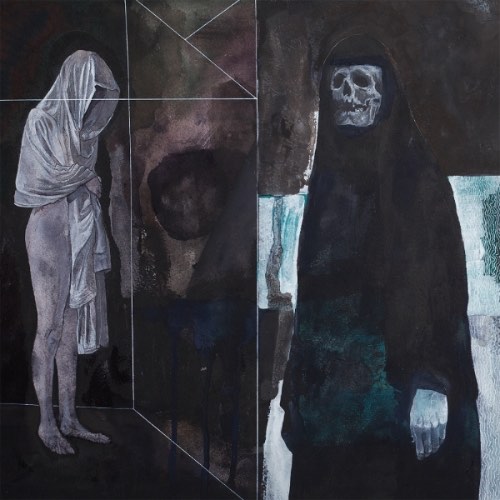 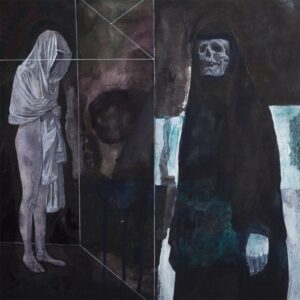 We recently ran an interview with members of UKHC / UKPHC (that’ll be “UK post hardcore” if you were wondering) bands Pariso and Svalbard, an interview which largely centred around talk about this, their recent collaborative album, which Ben Tansey reviews for us today.

Pariso and Svalbard, two of the UK’s leading names in heavy music, have combined forces on a powerful new LP, bookending the record with collaborative tracks that add something new to each band’s sound.

The split LP opens with the metal-influenced “Floating Anchors”; there’s some classic dropped-tuned chugging and even some harmonised guitar lines here, but cheesy teenage pop-metal this ain’t. The vocals are howled with pain and passion; huge, throat-splitting cries that engulf each song and make them as captivating as they are occasionally unsettling. The riffs fall more on the side of dissonant hardcore, unrelenting and sometimes brutal, focusing more on feel and emotion rather than actual melody. The LP’s closer, “Faceless”, follows more of a hardcore path with a much faster tempo, some gloriously intricate drumming halfway through and a thundering, dramatic breakdown at the end. There’s the briefest splash of guitar melody, but the majority of “Faceless” delivers pummeling, face-crushing riffs competing for your attention with those guttural screams.

For those of you who – like me – are new to these two bands, London based Pariso play a ferociously heavy brand of hardcore that’s fast, unforgiving and straight to the point. Despite contributing one more song than Bristol’s Svalbard, they clock in at a full three minutes less. By comparison, Svalbard – much newer to the scene with only a few EPs to their name – bring a more melodic but no less weighty approach to songwriting. Their material unfolds slightly slower, whilst Pariso like to hit you round the head with short bursts of aggression.

Having said that, “Helios, The Demise” breaks this rule with its mid-tempo stoner groove and slinky melodic guitar lines.

Of course it’s heavy as hell, but it doesn’t quite deliver the same bludgeoning as the other three tracks. It’s the sound of Pariso taking their time and letting their riffs grow and develop organically. A gloriously sludgy, doomy guitar underpins the whole song, propelled by some comparatively restrained drumming (although we’re treated to some thundering double-bass-pedal action right at the end.) Soaring lead lines are scattered throughout. For me it’s a standout track and the direction in which I’d point people unfamiliar with heavy music and unconvinced of its ability to incite a good satisfactory head bob to go in.

It’s not even quite ten minutes worth, but these four songs have got me looking back through their earlier releases to see what I’ve been missing out on. I suggest you do the same.

Svalbard turn in three full-bloodied slices of what their Bandcamp page calls “post-genredefinition-core”, which may or may not be a joke, but to these ears they mix elements of hardcore and various metal styles (did you know that every minute a Scandinavian invents a new sub-genre of metal) to create a cacophonous wall of solid riffage and screams.

“Ripped Apart” is the most hardcore of the three, tearing along at break-neck, snare-punishing speed whilst slow-burner “Allure” unfolds gradually, leading off with clean guitar and building to an ungodly mountain of delayed lead lines, crunching riffs and crashing cymbals.

“Grayscale” is the highlight here, erupting out of squeals of feedback and propelled along by militaristic snare rolls. The overall feel is a pretty anthemic one; the guitars grind out soaring, sprawling post-rock melody lines which leave the bass to rumble away underneath. “It’s never who you want it to be / You’ll always be betrayed by desire” singer Serena Cherry cries, summoning every ounce of conceivable angst. Many of the tracks on this album come to a fairly abrupt ending but “Grayscale” winds down with a euphoric instrumental finale and fades out as the song descends once more into feedback.

I strongly recommend anyone with even a passing interest in metal, punk, hardcore and alternative rock check this one out. It’s available to download orto hold in one, or both, of your hands on vinyl now.