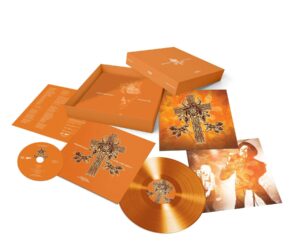 The follow up release to last years Adverse Reality (Pt1) has finally arrived and it’s well worth the wait. Starting back in the early eighties the Dublin crew are still around and releasing some fucking good shit as usual in their own anarchic way. This collection focuses mostly on the pandemic yet also preaches familiar topics that have always been on the PV agenda. The release of this has been held back for obvious reasons, yet the timing is even better when you listen to the songs contents. PV provide me with a rundown on each track while I try to describe the sound…

A great start to the album is Slimy Member, a proper punk rush of a track with a sneering vocal attack full of vitroil spitting out at the right wing racists.

“This is about the rise in right wing attitudes in politics, it focuses in on our own country, but the references to Trump, Mogg, Foster and Johnson illustrate that world leaders are complicit and responsible for this rise. Ireland is a country that has flooded the world with immigrants from the moment travel was available, so for a politician to take negative stances against immigration is utterly unacceptable. Its unacceptable in every form and in every nation, but we take it into our own territory to illustrate the point with better information.”

“Again… the rise of the right is a source of concern for all. This song tells the story of Paulie. Basically, the German war planes took a wrong turn and thought they were bombing Livrpool but hit Terenure in Dublin. The only casualty was a parrot (fact!). The song is a glib reminder that fascism and nazi-ism causes harm to innocent people. And to prevent the rise of this power again we must all be on alert and must stamp it out as a matter of urgency, before more innocents…parrots and people… get killed.”

Ignostic is a one minute plus spoken anti religion rant with a few name checks thrown in subliminally… honest.

“A self explanatory nod towards JCC. Its about not actually caring whether there is a god or not. If you cut that facet out of your life it has no hold or bearing on your future.”

H20 is another punk stomper, slow and menacing, nice little bass line and snares to kick off with that snarling vocal war cry “H20!!”

“Two years ago, despite having an official policy showing that road tax and general taxation was to cover water rates, Ireland tried to introduce them again. The double taxation proved to be a bridge too far and there was absolute uproar until they withdrew the tax and the water metres lay dormant. Its a great display of people power. Taxing natural resources is unacceptable!”

In my opinion this is the best track on the album. Back To Normal is pure ear worm stuff that veers toward Dead Kennedy’s meets The Damned territory. Clocking in at over six minutes would once be called hippy. This is 2020 folks, no punk vs hippy bollocks on my watch! A cracking guitar riff that cranks up the noise, it chugs along with a great repetitive mantra, snarling vocals. The bastards have got me with this. It won’t go away. Do we really want to go back to normal?

“Written and recorded during the lockdown (as was all of side 2), Back To Normal highlights how the world…albeit quite concerning…is a better place. Its the only situation in living memory when the super rich are on an even keel with the rest of us. Its not a virus that can see the class system, and everyone is on a level playing field. Over here private hospitals were taken over by the HSE, waiting lists for tests were on a symptomatic scale, everyones life was put on hold. A lot of us had the time to reassess our worth and reassess our lives and lifestyle… one hopes that when we all come out of the other side of this, as a nation and as a world we may be a bit less polarised and a bit more humble about our place on the planet”

Isolation is the most unlikely track you’d hear from Paranoid visions. A haunting track with ghostly vocals, maudlin, yet a thing of beauty that chills you out in this lockdown state. A nice break to begin side two. Lovely stuff.

The Frying Pandemic is another spoken word piece with dark overtones, similar to Ignostic, a preachers take on food manufacturing as it is now. Donald Trump should be immune from CV19 if he consumes his disinfected chicken burgers. Right kids?

“Genetically engineered food fed to livestock… eaten by people who interact and socially mix with others… and people get surprised when a dormant virus jumps species…..”

The Spinning Wheel cranks it all back up, excellent double drumming, those venomous vocals going a bit Evil Blizzard, matched with some excellent punk dynamics. All together now… “Spin me another yarn, Spin me another yarn” Nice little punk guitar solo popping up in there without going all metal. Proper tribal stuff. “Drop me another bomb…”

“A serious pandemic, hundreds of thousands dead, millions infected, millions out of work…. suddenly there’s billions and trillions of pounds/euros/dollars available for bailouts… because for once EVERYONE is affected. And yet ministers insult us by putting their own spin on it, scoring points on the popularity board, lying about reactions, casting shadows of blame at innocent sectors, favouring commerce over lives….”

Bonus track Art Is A Hammer goes all dub on us with the same sinister spoken word message. Dark and brooding.

“I’m an artist, not a vandal” proclaimed St Bono when he defaced a wall in Justin Herman Plaza, San Francisco…. “arts a hammer, heres a picture… I’m a vandal not an artist” proclaimed not-so-saintly Deko on the track vandals in 1988. This track picks up on that statement… art is a beautiful facet of our lives and it comes in many forms…even occasional U2 songs…”
A sign of our times. Lots of bands and artists are trying to put there mark on pandemic themes, yet Paranoid Visions do it with ease. They have that extra long finger on the pulse being no strangers to writing about things how they are. The leader in punk politics stride forward with this next episode in the Pharmageddon series. Bring on Part 3…
Things you don’t know about Paranoid Visions:
11 singles and 9 albums in 13 years
Appeared on the East and West coasts of America, Canada, Japan, and all over Europe at headline shows and performing at some of the biggest festivals in the world (Rebellion, Riot Fest, Punk Rock Bowling, ’77 Fest, Amnesia to name but a few)
Featured in 3 films, 3 TV programmes and had track 2 of this release used on The BBC News
Paranoid Visions
Facebook
Twitter
Words by Wayne Carey who writes for Louder Than War. His author profile is here