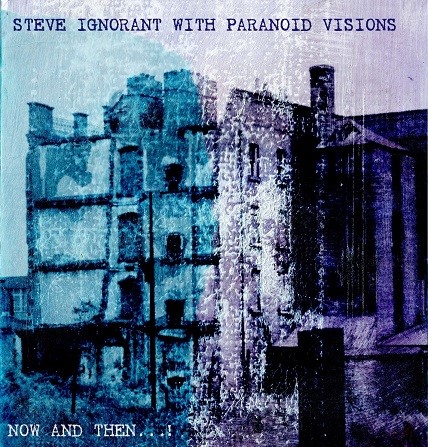 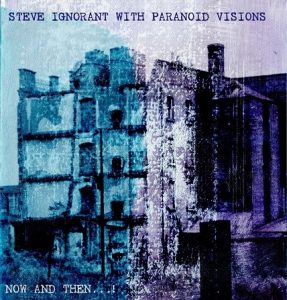 Steve Ignorant & Paranoid Visions have announced the follow up the hugely successful 2013 LP “When…?”, a commercial and critical hit, with the album “Now and Then….!”

“Now and Then….!” will be released via Overground Records (OVER152) in all formats including a limited edition vinyl pressing (purple vinyl with CD / booklet), standard CD and Download editions on the 30th September 2016.

The 10trk album was recorded in both Ireland and England (Dublin and Norwich) throughout the winter of 2015 / 2016 – “Now and Then…!” is the sound of a collaboration that has grown together and artists that are more confident about their abilities. In 2013 when the announcement was made that Steve was returning to recording with a bunch of Irish reprobates, some were sceptical, not least the band themselves…but the resultant deliberately lo-fi angry slab of vinyl sold very well and garnered a lot of support. Three years on, with gigs ranging from pubs and clubs in the UK to festival slots in America and Canada, the band have recorded “Now and Then…!”. The material is a combination of new songs and reworked songs from Steve Ignorant’s post-Crass days and Paranoid Visions unreleased or underplayed material.

Musically ranging from the Gang of Four-esque “Look Mummy Clowns” or “Bleak Town Revisited” to the Ramonesy(sic) “Loudmouth” , the dark “Fan the Flames” or speed punk of “Something More” shows the band as creatively adept and eclectic as ever. But the powerful recordings of Schwartzeneggar’s “Art and Craft” , Stratford Mercenaries “No More Running” and “Where is Love” demonstrate a passionate vocalist who still believes every word he said and believed at the time they were originally released.

“Now and Then…!” has already spawned a limited edition red vinyl 10” ep (including a remix by the Damned’s Rat Scabies) “The Height of Ignorance”, which sold out on prelease, and is now only available on CD.

Recent gigs have been at the high profile Riot Festival in Chicago, Gramercy Theatre in New York, Amnesia Festival in Canada and Rebellion Festival in Blackpool.

The album is being launched with headline shows at the legendary 100 Club in London on 30th September (Tickets) and the Hanger in Dublin on October 8th (as part of the We Shall Overcome initiative).