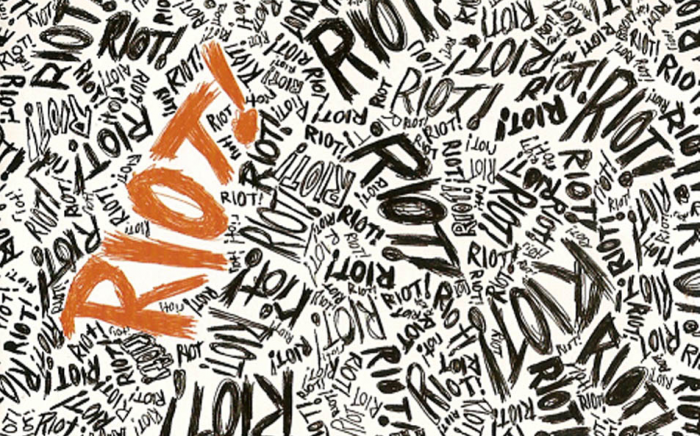 Before they switched lanes and became multi-coloured purveyors of alt pop, Paramore were the darlings of emotionally-charged emo. Two things have always remained, however – the energy and power of Hayley Williams and a lingering sense of drama. Sam Lambeth looks at their crossover record, Riot!, as it turns ten.

To say Paramore have had dramas is to say Better Call Saul is slow-moving – throughout the band’s tenure, they’ve endured a seemingly endless stream of court cases, interband arguments and general malaise. It’s no surprise that the Nashville natives, led by Hayley Williams, have frequently considered throwing in the towel. Ten years ago, things were no different, but from the jaws of defeat they snatched a victory that has made them one of alternative rock’s biggest bands.

From the start, Paramore had trouble. Original bassist Jeremy Davis left, casting a shadow over their debut record All We Know Is Falling (quite literally, from the cover’s point of view). Even when he was bought back into the fold for the recording of Riot!, he still found himself temporarily expelled. To add to the woes, second guitarist Hunter Lamb handed in his notice. Add all this to a troublesome blog that just wouldn’t go away and 2007 almost became the year Paramore imploded for good (something that would be repeated ad infinitum).

However, from such misery came, well, misery. Riot!’s lead single Misery Business was a clear break from the more introspective emo the band had previously peddled. Out went more ominous and crushing chords and in came sleek, but still jagged, swaths of punky riffs and Williams’ own soaring snarl. Throughout the album, Williams’ confidence soars as much as her voice – with the bombastic fretwork of Josh Farro providing the anchor, Williams was able to articulate her boundless energy and enthusiasm over songs that gave the band a clear calling card – even if Riot! was a product of its time, it was clear Williams had real staying power.

Farro wanted songs that had more brio for their burgeoning live act, and he delivered with the pummelling opener For A Pessimist, I’m Pretty Optimistic. Despite its title sounding like a poor man’s Fall Out Boy (who, in song titles, were a poor mans Smiths, lest we forget), the song’s urgency and Williams’ howl have ensured it remains a staple of their setlist today. Equally as potent is Crushcrushcrush, a disco-tinged slab of strident power chords which became another hit single, while Let The Flames Begin took their debut’s moodiness and bathed it in stadium-sized scuzziness.

Riot! could have easily fell in danger of becoming an anachronism, but the band’s way with a hook ensured that many of its songs were more than just a teenage fever dream. That’s What You Get is easily one of the best songs the group have put to tape, an emotionally-charged stomper with a reflective, but rollicking, chorus that’s as simple as it is devastating. When It Rains was equally as introspective, but its more stately pace allowed Williams to show more emotional depth, while Fences was a sparkling indie strut.

With healthy sales, magazine covers and a slew of successful music videos (propelled by Williams’ era-defining orange locks, which spawned a generation of wannabe Williams’ across the globe), Riot! propelled Paramore into the major leagues. They fine-tuned the formula with the bullish Brand New Eyes, but it was their 2013 self-titled album that provided the most surprises. The Farro brothers were gone in acrimony, but once again from despair came brilliance – they traded in pop-punk for a Pandora’s box of pop, rock and more.

Their 2017 record After Laughter looks set to continue this trend, as well as arriving in a storm of drama. If the latter part is sadly part and parcel of Paramore, Riot! remains an equally pivotal part of the band’s back catalogue.

All words by Sam Lambeth. You can find more from Sam in his author profile on LTW here.