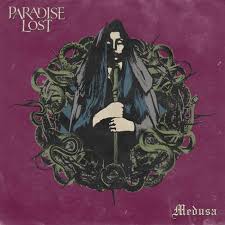 Most people will know Medusa as the Gorgon from Greek mythology; she is the infamous beast with venomous snakes for hair who will turn anyone that dares to look into her eyes to stone. It is this hideous creature who Paradise Lost have chosen to be the figurehead for their 15th studio album.

With their last album, The Plague Within, Paradise Lost returned to their doomier roots and Medusa firmly picks up the torch with eight compositions that are expertly put together to create an incredibly impressive album.

Having formed in Halifax in 1988, their music defined the gothic subgenre and raised doom metal to a new level – they are also considered pioneers of an entire musical generation. Vocalist Nick Holmes, guitarists Greg Mackintosh and Aaron Aedy, along with bassist Steve Edmondson have always formed the main body of the band with line-up changes only occurring behind the drum kit.  Their new drum prodigy is the 22-year-old Finn Waltteri Väyrynen,

Many of the tracks on Medusa take the more orthodox tempo of doom metal. The epic Fearless Sky opens up the album. Clocking in at close to nine minutes, the organ that introduces the album feels completely sinister before the band smash into the album and set their stall out with a trudging tempo and weeping guitars. Although Medusa is largely on the doomier side of the spectrum, Paradise Lost mix up the album with slightly more up-tempo sections and the distinctly pacier tracks in Blood And Chaos and the ferocious From The Gallows.

The Longest Winter opens up with a monolithically heavy guitar and pounding drum before Holmes vocals evoke that immense grief that has become synonymous with Paradise Lost. The same can be said of the title track as cleaner vocals traverse with deathly growls that plunder the depths.

Layers are added to the music with subtle piano work, again on the title track, that helps build to an epic guitar solo to bookend the track. Until The Grave closes the album, and again, extra choral flourishes are added in the introduction that educe the gothic manner of the music.

Jaime Gomez Arellano, who has worked with Ghost, Ulver and Cathedral has produced the album. The production value on the album is one of the key ingredients of a truly monstrous, nihilistic and gloom ridden album.

Paradise Lost are clearly masters of this particular genre and they have returned with an unquestionably great album that doesn’t waste a note in its duration. It is clear, succinct and crushing throughout.