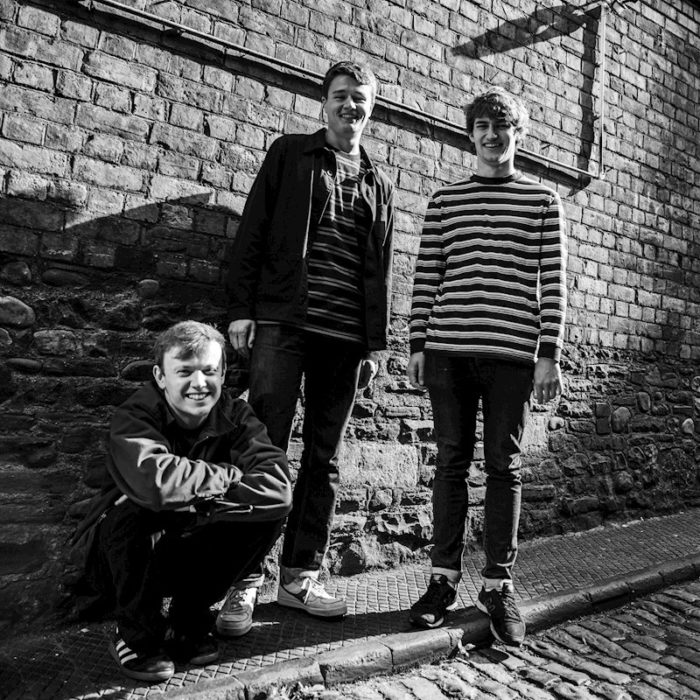 Earlier this year this writer was given a copy of an EP (“Lle yn y byd mae hyn?”) by a young and up and coming Welsh band. At first I wasn’t sure if I needed another indie guitar band in my collection but as it came out on the always-impressive Libertino Records I decided to give it a spin. It turns out I not only needed another guitar band in my life but I may have stumbled across the beginnings of a story that is going to have a very interesting narrative. This wasn’t more wannabe Manics / SFA /Stereophonics (insert whichever big Welsh band you’ve heard of here) instead what I was hearing was three young men stretching the band dynamic into a new mould more akin to your Pavement, Mogwai, Slint’s. It was remarkable to hear this new, young energy bursting out from a scene that has in the past become stale (and don’t worry there is more to come via this country if you keep paying attention).

Quick on the heels of “Lle yn y byd mae hyn?” comes this new double a-side single. ‘O’n Ni’n Ffrindia’ / ‘When He’s Gone’ sees the band push further with their confidence and their gift with song dynamics. ‘O’n Ni’n Ffrindia’ is all louche strung out mumble sing greatness with some wonderful sudden switches in time signatures and attack. ‘When He’s Gone’ starts of all hanging notes and perfect execution of space before it emerges into a slacker anthem (yeah I used that phrase) that is marries Sub Pop to Rough Trade ethics whilst keeping that beautiful independent Cymraeg spirit.

Ianto Gruffydd from the band explains:

“O’n ni’n ffrindia’ deals in part with the loss of friendship, ‘When He’s Gone’ deals with another kind of loss, the decline of heroes and individuals. When you see someone deteriorating and how difficult that is whilst also remembering how hugely influential that individual was for so many people. It’s easy to forget that'”

Papur Wal will hardly be off the road this summer, culminating in a UK tour showcasing the new exciting sound of Wales alongside Adwaith and Mellt in early September: Poetry Club, Glasgow (4th), Manchester Yes (5th) and London Dalston Victoria (6th)

Here is more evidence that what we are living through right now is a golden period for music in Wales. If you are reading this from outside the country please start investigating and paying attention as you don’t want to be on the sidelines for what is building into a quite remarkable movement.